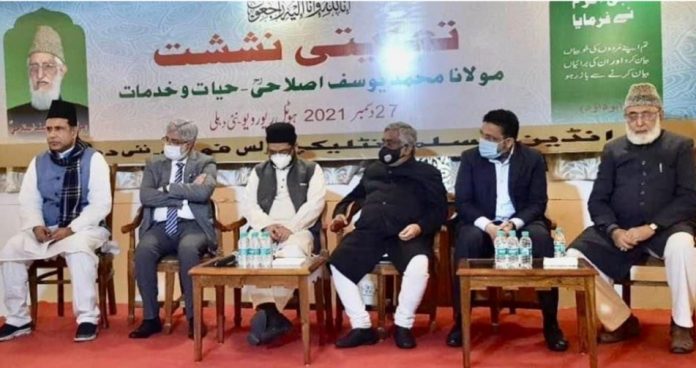 New Delhi: Personalities like Maulana Muhammad Yusuf Islahi are not often born. When they depart to heavenly abode, they not only leave  their children orphans but also their nations. The best and true tribute for such personalities is to follow their footsteps,  carry forward their mission and prepare a new generation to succeed them, said the speakers who gathered to pay tribute to renowned Islamic scholar and author  Yusuf Islahi who passed away on December 21, 2021 at the age of 89 years.

The condolence meeting was organized by the Indian Muslim Intellectual Forum here on Monday. Maulana is alive among us, said Padma Professor Akhtar Al-Wasey in his presidential address, and he will live forever through his writings. Maulana’s writing style was straightforward and effective. It is not an exaggeration to claim that just one book is sufficient for his eternal salvation and survival in this world, he added.

Syed Saadatullah Hussaini, Ameer of Jamaat-e-Islami Hind described Maulana Yusuf as an epoch-making personality and such people  born in years. His book ‘Etiquette of Life in Islam’ (Adab-e-Zindagi) was given the same importance in our time which was once for ‘Bahishti Zewar’  written by Mawlānā Ashraf Ali Thanvi.  Asan Fiqh (Everyday Fiqh), Quraani Taleemat, Islami Muashrah, Dai -e-Azam, and others were widely acclaimed books, he said.

Senior journalist Syed Mansoor Agha, while mentioning his relationship with Maulana, said that Maulana was very friendly and hospitable. He was also a teacher who helped students with their academic issues. He also provided scholarships to poor girls to pursue their studies at the Jamiat-ul- Salhat.

Convener Forum Kaleem Al-Hafeez gave a detailed introduction of Maulana Islahi. He said that Dr. Salman Asad who is the son of the late, is a very close friend of his. Maulana Islahi also worked for the education of girls and the empowerment of Muslim women, he added.

“Abbu (father) loved children very much, he not only loved our children, but when we were brothers and sisters, we all loving, playing with us, but also training us in sports,” his scholar son Dr. Salman Asad said of his late father.

When Abbu was imprisoned during emergency, he used to write Ammi Jan guidance in every letter for all of his children, and he did things according to each one’s habits. He had a profound devotion to the Qur’an, and he made arrangements to listen to it even in his final days. On the passing of, I received thousands of WhatsApp messages and over 500 phone calls from all around the world. He has a special place in everyone’s heart, said Asad.

Voice of America correspondent and noted journalist Suhail Anjum said that we got to know Maulana from his writings, but when we met him, we found him to be unique in practice. His death is undoubtedly a great tragedy for the community.

PVC, DSU, Dr. Rehan Khan Suri said Maulana’s demeanor was appealing, his manner was appropriate, and   his reflection can be seen in Dr. Salman Asad.

I worked with Maulana in Zikra, according to Dr. Muzaffar Hussain Ghazali. He was the one who taught me Urdu. I also completed my PhD in Urdu. Many people benefited from the late Maulana’s generosity, Dr Ghazali added.

Maulana could only accomplish what he wanted, according to Musharraf Hussain Falahi, a relative of the late Maulana and uncle of Dr. Salman Asad. Although physically frail, Maulana had tremendous willpower and used to spend the entire night reading and writing.

Advocate Asghar Khan said that he was proud of him as he also belongs to Maulana’s native city Rampur.