New Delhi : Last Tuesday in Malaysia televangelist Dr. Zakir Naik  was banned from making public speeches after one of his statements hurt the sentiments of the minorities living in the country.

Dr. Naik in his speech said that Hindus and Chinese enjoy more rights in Malaysia than the Muslims.

Malaysia is a predominantly Muslim country.

The stringent implementation of laws concerning the protection of the rights of minority in a Muslim country is commendable considering the situation in today’s India. In a country where Muslims are the second largest minority sharing 14.6% of the total population, the intolerance and injustice towards them is rampant.

The action against Dr. Zakir Naik speaks how a hate monger is dealt in a Muslim country. Now compare this with India where not only hatemongers have patronage of ruling parties even terror accused become member of parliament,  mob- killers are felicitated by minister  and the body of killer  is wrapped in Indian flag and they get preference in jobs.

PM Narendra Modi gave a clean-chit to the chief minister of Jharkhand a state that has witnessed maximum incidents of mob lynching in which at least 18 Muslims were killed brutally.

In  Uttar Pradesh, Yogi Adityanath, a right wing extremist  became the chief minister of the state.

He  faces criminal charges. He has been accused of attempted murder, criminal intimidation and rioting in relation to a clash that took place in 1999. And in 2007, he spent 11 days in jail for making inflammatory speeches.

He  accused Muslim men of indulging in a “love jihad” to seduce Hindu women and convert them, he claimed that Mother Teresa wanted to Christianise India, he called for a Donald Trump-style travel ban on Muslims in India and compared Bollywood superstar Shah Rukh Khan to Pakistan-based militant Hafiz Saeed.

At one point, he shared a stage with a supporter who said that when Yogi Adityanath came to power, Muslims would no longer have the right to vote and that supporters would rape dead Muslim women.

A citizen who has honored the country globally, Shahrukh Khan, finds himself branded as terrorist by the CM.

The body of Ravi Sisodia, who died of renal and respiratory failure was one of the 18 accused arrested on charges of killing Akhlaq, was wrapped  in India’s national flag. 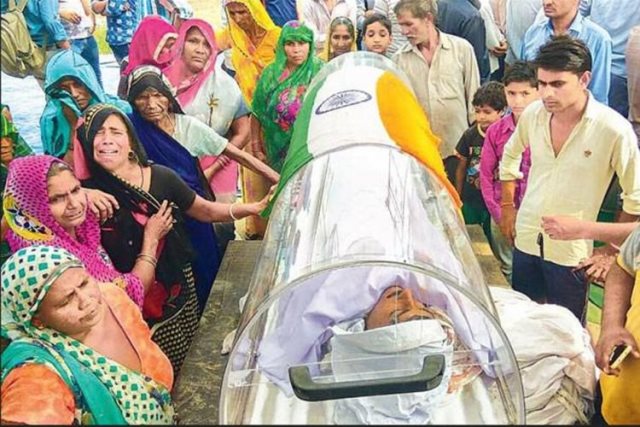 The body of Ravin Sisodia, one of the accused in the Dadri lynching case wrapped in national flag.

A Union minister Jayant Sinha welcomed 8 killers of Alimuddin Ansari and garlanded them after they were released on bail in Jharkhand. 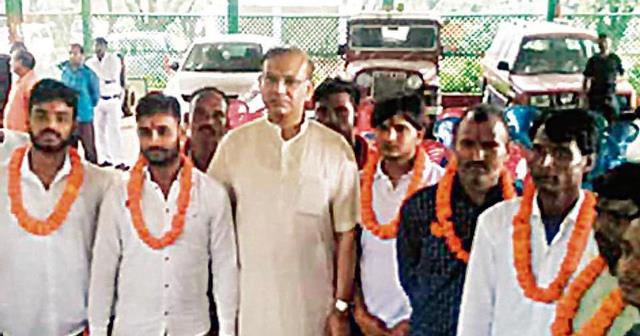 Jayant Sinha with the lynching convicts at his residence they were released on bail in Ramgarh. ( PTI photo)

In Pehlu Khan mob lynching case, a gruesome incident that was caught on camera,  all six accused involved in his killing were acquitted by a court in Rajasthan.

Since 2017, Muzaffarnagar courts have declared a judgement in 41 cases linked to the 2013 riots and has delivered a conviction in only one case of murder. All 40 cases in which the accused were acquitted are the cases involving attacks on Muslims.

The one conviction came in a case in which Muslims were accused and  a session court pronounced  sentence of life imprisonment to Muzammil, Mujassim, Furkan, Nadeem, Janangir, Afzal and Ikbal for the murder of cousins Gaurav and Sachin in Kawal village on August 27, 2013.

While 53 Hindus accused of murder walked free. It doesn’t end there; a similar trend emerged in four cases of gang rape and 26 cases of rioting also.

This is the reality of a Hindu majoritarian country where minorities are at the receiving end.

On other side it took only few days in Muslim dominated Malaysia to take action against Dr. Zakir Nayak who was factually correct in his statement but his statement was insensitive and provocative in nature.

3 thoughts on “Sadhvi Pragya Thakur vs India and Dr. Zakir Naik vs Malaysia”