In the crusade questioning as to how the NCB officer had allegedly produced a fake caste certificate to land a plum central job in reserved category, the Nationalist Congress Party National Spokesperson released the purported School Leaving Certificates of Wankhede when he left one school to join another due to ‘change of residence’ status. 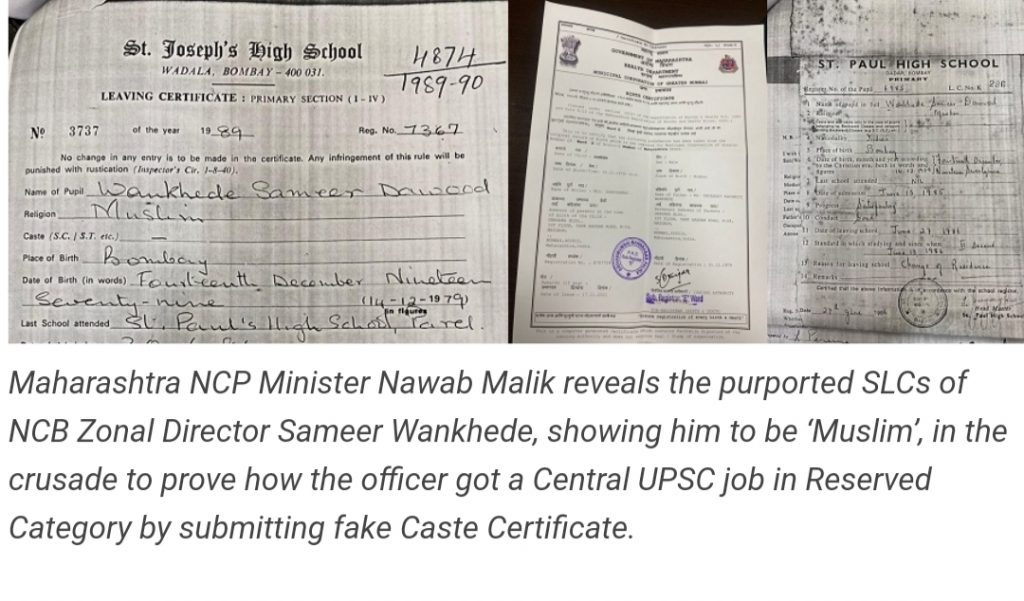 The first is from St. Paul High School Dadar, which he left on June 27, 1986 as a Class 2 student a year after admission (June 13, 1985), to join the St. Joseph School, Wadala, owing to shifting to a new address, both in south-central Mumbai.

The two handwritten certificates — as was the norm in those days — show identical details, including the pupil’s name as Sameer Dawood Wankhede, DoB 14-12-1979 in words too and religion as ‘Muslim’.

“I have already submitted these and other details to the Hon’ Bombay High Court, which will pass its interim orders later today. Wankhede has been indulging in frauds and is an expert in creating ‘fake certificates’,” Malik said.

The Wankhede family countered Malik by producing a computer-generated certificate of the Brihanmumbai Municipal Corporation which shows the name as Sameer, mother’s name as Zahedbano and father as Dnyandeo Kachruji Wankhede.

Dismissing these contentions, Malik pointed out that the BMC has scanned all the original old handwritten documents and the SLCs of the two schools are from those electronic records.

“Sameer Dawood Wankhede has been producing such fake certificates. I have submitted all the documents to the High Court, the Mumbai and Maharashtra Police chiefs, the Opposition Bharatiya Janata Party and demanded a detailed investigation,” Malik said.

The NCP Minister reiterated that Wankhede — an officer of IRS-2008 batch, currently with NCB Mumbai — will definitely lose his job which he got on the basis of furnishing such ‘fraudulent documents’, and more revelations would follow to reveal the truth. — IANS

No HC relief for Nawab Malik to vote in RS polls