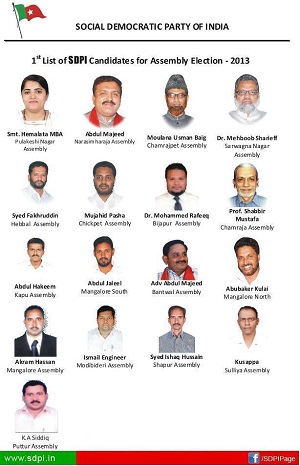 Bangalore, April 7: Social Democratic Party of India (SDPI) and Bahujan Samaj Party (BSP) have decided to contest Karnataka Assembly poll as alliance. SDPI has released its first list of 17 candidates for the upcoming assembly election scheduled on 5 May 2013. The list was released in the presence of the leaders of both parties.

SDPI and BSP have tied up and alliance between the parties has been agreed upon statewide, said Abdul Majeed Kodlipet, SDPI Karnataka state president.