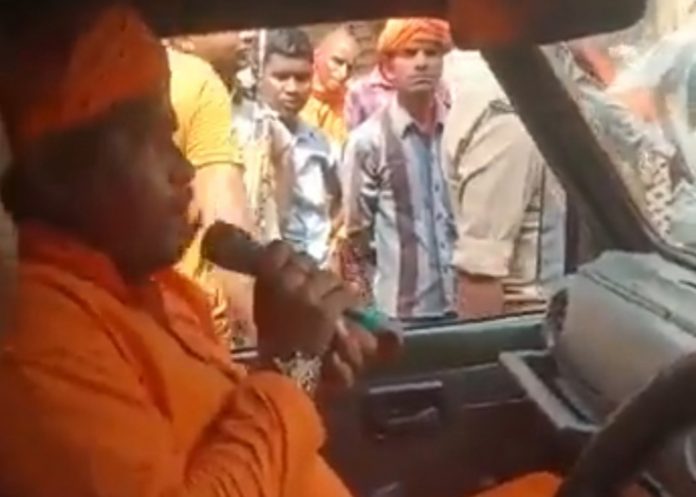 Six days after a video sparked outrage on social media about a priest’s hate speech against Muslim Women in Sitapur district of Uttar Pradesh, a case has been registered in this matter by the Sitapur Police.

A Hindu priest calls for kidnapping and rape Muslim women openly in front of a mosque in the presence of police personnel in Khairabad town of Sitapur district in Uttar Pradesh. #Islamophobia #Communalism #Hindutva pic.twitter.com/R3oGt06gef

In the viral video the priest can be seen making the hateful comments against Muslim women outside a mosque while addressing a gathering from inside a jeep and allegedly threatening to kidnap and rape them. The four cops can also be seen in the frame.

The statement issued on Twitter by Sitapur Police read, “A case under relevant sections has been registered and further steps are being taken on the basis of witnesses’ statements.”

In the video the priest, who is said to be the local religious Mahant, appears to make communal and provocative remarks and is seen allegedly saying that if a Muslim harasses any girl in the area, he would kidnap Muslim women and rape them publicly. The threat is followed with the loud cheers and shouts of “Jai Shri Ram” by the crowd.

People from across the country while sharing the video condemned the remarks made by the Mahant and called for action against him.

Mohammed Zubair, The co-founder of fact-check website AltNews, while sharing the video on his twitter handle pointed out that the video was shot on April 2 but no action had been taken by the police even after five days.

While responding to his tweet, Sitapur police clarified that said that a senior officer is investigating the matter and the action will be taken only after knowing the facts.

Several twitter users flagged the communal remarks to the UN human rights body and National Commission for Women, seeking intervention in the matter.

The National Commission for Women, while condemning the remarks, issued a statement in this matter and has written a letter to U.P DGP in which it has sought Mahant’s arrest and a stern action against him.

“The Police should not be a mute spectator in such incidents and appropriate measures must be taken by them to curb people from using such outrageous language for women,” said a statement issued by the Women’s commission.