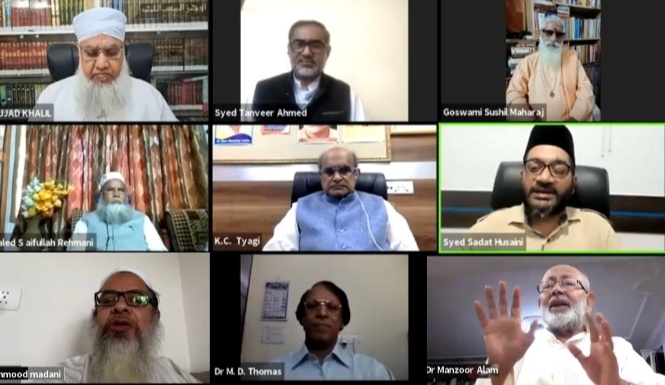 New Delhi:   Denouncing Israel’s aggression in no uncertain terms, prominent citizens and religious leaders of India reiterated that the international community must step in and stop Israel’s continued bombing of civilian population in the occupied Gaza strip. Expressing solidarity with people of occupied Palestine, they held an online press conference under the banner “Indian Friends for Palestine” and issued a joint statement.

Former MP and Janata Dal (U) leader K C Tyagi emphasized that, “We should look at this issue from a humanitarian perspective, not a religious one. The current conflict and Palestinian protests in Jerusalem are due to Israel’s aggressive expansionist policies and actions on the ground”.

Welcoming the Indian representative TS Tirumurti, statement in the UN Security Council, that India fully supports the just cause of Palestine, Tyagi blamed Israel for the current violence in occupied lands.

“The current unrest erupted when the Israeli government, in violation of all international laws and treaties, launched a campaign to forcibly evict the Palestinians living in Sheikh Jarrah and other neighborhoods near Al-Aqsa Mosque,” said JD (U) leader ,a  member of the Executive Committee of Parliamentarians for Al Quds (Jerusalem).

Convener of “Indian Friends for Palestine” Maulana Khalid Saifullah Rahmani underlined that, “The Al-Aqsa Mosque is a holy place for Muslims all over the world and their religious sentiments are attached with it. The city of Al Quds (Jerusalem) is important for three major religions of the world. Therefore, Israel has no authority to change the demography or status of the city and its structures”.

The issue is basically humanitarian and political one and Israel’s mill of oppression must be stopped once and for all, added Maulana Rahmani, the acting General Secretary, All India Muslim Personal Law Board (AIMPLB).

President of Jamaat-e-Islami Hind Syed Sadatullah Hussaini said mere condemning this blatant aggression of Israel is not enough and the international community and their watchdog institutions should take all appropriate steps in reining such lawless and hostile nations.

“All justice-loving countries of the world should not merely, but also to take all the steps that the United Nations Charter entitles them for seeking action against hostile and lawless nations. They must pressurize Israel and impose strict economic and diplomatic sanctions against it. The Zionist rulers and soldiers of Israel must be indicted and put on trial for war crimes in the International Court of Justice for their atrocities in Gaza and other Palestinian territories,” he added.

Former Parliamentarian and General Secretary of Jamiat Ulema-i-Hind, Maulana Mahmood Madani said he fully endorsed the position of “Indian Friends for Palestine” and said: “The main reason for most of the Palestinian protests and intifadas (resistance movements) are the unprovoked attacks on Gaza by Israel, its daily atrocities against Palestinian civilians, and its covert and open diplomatic activities in the Middle East. Israel has been violating many UN resolutions and the Universal Declaration of Human Rights. Even in bilateral agreements, Israel has a history of backtracking on its commitments. Israeli political class and its rulers intensify their aggression from time to time to subvert focus from their local political problems”.

Renowned Islamic scholar and cleric, Maulana Sajjad Nomani pointed out that: “These heinous acts are being concealed from the world and attempts are being made to publicize the Palestinian resistance operations unilaterally. The way journalists are being targeted and their offices being demolished to keep the world unaware of the truth and facts on the ground is a serious challenge to the whole free world. I call upon all justice loving countries including the Arab world to take the lead in resolving this crisis as soon as possible”.

Dr. Manzoor Alam, General Secretary, All India Milli Council said: “The immediate solution to this problem is to swiftly end the Israeli occupation of Al-Quds and other occupied Palestinian territories and to force Israel to stop all its cruel and aggressive intentions and actions. The United Nations must play its role in stopping Israel. Israel’s actions are illegal, against all international treaties and equivalent to war crimes against the whole world”.

Maulana Muhammad Sufyan Qasmi, Rector of Darul Uloom Waqf Deoband addressed the conference and said that he supported the stand taken by the group and hoped that the Palestinians would  get justice and are liberated from the illegal occupation of Israel.