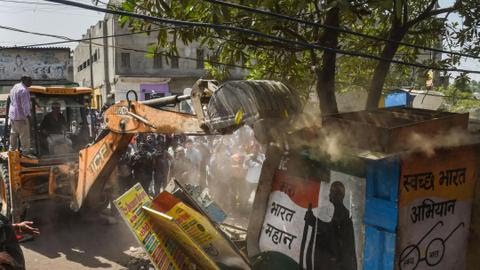 Over 30 women’s and other groups demand compensation and rehabilitation of home demolished in Jahangirpuri.

New Delhi:  In  a strong letter, over 30 women’s organizations, other organizations and concerned citizens on Wednesday demanded to stop unlawful demolitions in Jahangirpuri area of North West Delhi and to  compensate, rehabilitate, restore livelihoods of those whose houses and shops were  illegally demolished in contravention of Supreme Court orders.   The letter was sent to  the Lieutenant Governor of Delhi, the Delhi Chief Minister, and Mayors of all the five Municipal Corporations of Delhi which expressed “Deep Distress and Concern” regarding the on-going unlawful demolition drives in Delhi.

The letter expresses “dismay at the way in which bulldozers hired by civic authorities are targeting temporary structures essential for the livelihood of the poorest communities of Delhi who have already suffered sudden and severe destruction of their livelihoods during the last two years of the coronavirus pandemic and lockdown”.

Further, in the case of Jahangirpuri, it is not an illegal or unauthorised colony as has been reported in sections of the press. It is an official resettlement colony established by the government itself, and its residents have fulfilled the due process required by the process of resettlement which includes possessing all the paperwork for their residences and moveable and immoveable property.

The letter states, “There is obviously a communal purpose to these demolitions, as blatantly communal sentiments have been expressed on the matter by political actors and echoed in media quarters. More such demolitions have been planned primarily in Muslim majority areas of Delhi – these include Shaheen Bagh, Okhla, Jasola and Madanpur Khadar. In Jahangirpuri too, long-time residents have been painted in this poisonous communal atmosphere as illegal immigrants, “Rohingyas”, “Bangladeshis” and “rioters” without a shred of evidence.” The signatories hold that the demolitions are therefore part of countrywide actions by the BJP attacking Muslim lives, practices and livelihoods.

The signatories who include women’s organisations such as AIDWA, NFIW, AIPWA, PMS, SAHELI as well as ANHAD, IFTU, AICCTU, Hawkers Joint Action Committee, AISA etc, and eminent civil society voices such as Uma Chakravarti, Lalita Ramdas, Navsharan Singh, Jayati Ghosh and others calls upon all the authorities: