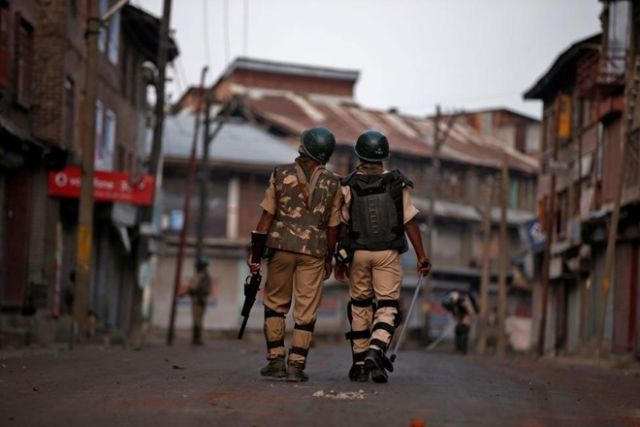 Srinagar : As compared to last year, Kashmir has so far witnessed a steady drop in both the intensity and prevalence of street violence.

In 2016, spiralling public violence was sparked by the killing of Hizbul commander Burhan Wani in a gunfight with the security forces on July 8.

The events that followed Wani’s death set the Valley on fire.

Official figures say 96 civilians and two policemen were killed in the unrest in the Valley and around 2,000 people, including civilians and security personnel, were injured.

Separatists claim 158 civilians were killed and 15,000 others injured in the unrest.

Nobody, however, disputes the fact that nearly 200 civilians suffered either permanent or partial loss of vision due to the use of pellet guns by the security forces during crowd control operations.

The writ of the state government was completely eroded during the unrest and this led to a situation in which the security forces could not carry out any anti-militancy operations, especially in the south Kashmir districts of Anantnag, Kulgam, Pulwama and Shopian, after July last year.

This encouraged the militants to move about freely and create an impression of so-called “liberated areas”.

This prompted dozens of local youths to join the militant ranks in south Kashmir areas.

The most serious fallout of the unrest on the security front were the public protests during anti-militancy operations.

“Over two dozen anti-militancy operations had to be called off to avoid loss of civilian lives in the beginning of this year,” said a senior intelligence officer who did not wish to be named.

The officer added that the grip of the state administration and the security forces on the ground situation has been re-established. Although there are still public protests during anti-militancy operations, the intensity of such protests has fallen appreciably.

The authorities believe the National Investigation Agency’s (NIA) crackdown on the alleged beneficiaries of terror funding in Kashmir has seriously impacted the incidents of stone-pelting and other anti-India protests in the Valley.

“There is no doubt that stone-pelting incidents have unseen hands behind them that support and prompt such violence.

“Yet, many protests during anti-militancy operations are spontaneous because of the involvement of local youth in militancy,” said another intelligence officer.

“Believing that all protests are supported by funding would be fallacious. This is the reason why efforts to engage local youth in healthy activities like sports and social interactions are necessary while giving the unemployed job opportunities to live a life with dignity and confidence,” the officer added.

That the security forces are now talking of surrender opportunities to youth who joined militancy since last year in the “heat of the moment” definitely indicates the tightening of grip on the ground by the army, state police and the paramilitary forces.

“Operation All-Out” was launched in the Valley after the Union Home Ministry, in consultation with the army, decided that the slipping away of the ground situation any further, especially in south Kashmir areas, could result in a situation that might be worse than what was witnessed during the early 1990s.

“Since January this year, 147 militants, including some top commanders, have been killed,” said a senior police officer.

“We have been able to push militants from populated areas to higher reaches and the intelligence network has been strengthened to an extent that enables hot pursuit of militants the moment they venture into villages and towns,” he added.

He, however, did not attribute the improvement in the overall security situation to any single factor.

“It is the overall impact. It is the NIA raids, the hot pursuit by the security forces and also the concern of parents for their children that have had an overall impact on the ground,” the officer added.

Whether or not the NIA raids had a crushing impact on the morale of the separatists can always be debated, yet the fact remains that the security situation has definitely improved in the Valley after these raids.

Ironically, the tourist inflow into the Valley has been disappointing this year even though the security situation has improved.

“We had better tourism last year till July.

“Despite the unrest, we had 1.1 million tourist arrivals till the end of July 2016. This year, as September draws to a close, we have less than 50 per cent of that number till now,” said a senior official of the state’s Tourism Department.

The state government has blamed the media outside Kashmir for over-hyping the street violence in the Valley.

“Kashmir today is as safe as any other tourist destination in the country. We are expecting large numbers of tourists during this winter and next year,” said the Tourism Department official.

The optimism of the state government, the security forces and political observers apart, predicting Kashmir has always been a difficult task.

How absolutism is killing trust of people in Kashmir