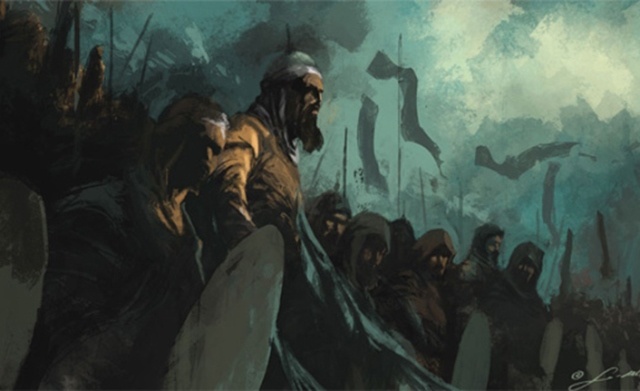 The screams and cries of the innocent Muslims who were massacred in Jerusalem 88 years ago were still present in the minds of the Sultan. The horrific stories of horses swimming in Muslim blood in the streets of Jerusalem were igniting the fire of revenge in the hearts of an army standing at the doors of Jerusalem. This army was none other than the army of Sultan Salahuddin Ayyubi which was on the verge of taking back the holy city of Abrahamic faiths. The terrified Christian population was only waiting for their end because they also had a clear picture of what they did to Muslims 88 years ago in their minds.

But as the army of Sultan Salahuddin entered Jerusalem, something unexpected happened which was not even imaginable in the 12th century. After entering the city, Sultan Salahuddin Ayyubi portrayed the true image of Islam to the world and setting an example of tolerance, humanity and justice which made even his enemies, his admirers. On the occasion of Human Rights Day, I will briefly examine the events which took place after the siege of Jerusalem in 1187 and how these events made Sultan Salahuddin Ayyubi a champion of Human Rights in an era where there was no concept of Humanitarian Laws.

Sultan Salahuddin Ayyubi or Saladin (according to Western World) was born in 1137 in the city of Tikrit (modern day Iraq). He is regarded as a true Muslim hero who conquered the city of Jerusalem from Christians. He is not only remembered for his gallantry, heroism and brilliance as a soldier, statesman and military leader but also for his tolerance, mercy and justice.

He was the founder of the Ayyubid dynasty. He was the first ruler in the Islamic world to be called as the Custodian of the Two Holy Mosques. Many of the scholars describe him as the de facto Caliph of Islam. At the height of his power, his empire included Egypt, Syria, Upper Mesopotamia, the Hejaz, Yemen and other parts of North Africa.

Saving Lives of Thousands by Accepting the Surrender of Jerusalem

After giving a humiliating defeat to the Christian armies in the Battle of Hattin, the strong and large army of Sultan Salahuddin laid siege of Jerusalem. It was quite clear that the Muslim army will soon overrun the city. Seeing the situation of getting out of control, leader of the defense of Jerusalem, Balian met Sultan Salahuddin with an envoy.

While negotiating, Balian threatened the Sultan that if his unconditional surrender demands are not met, then he will kill the entire Muslim population of 5000 in the city and will destroy the Islamic relics and structures there.  By this Balian made it clear that he was not at all concerned about the fate of Christians which were present in the city because it was only a matter of days until the Sultan’s army would have entered the entire city.

On the other hand, Sultan Salahuddin was a true follower of Prophet Muhammad (PBUH) and wanted to avoid as much causalities as possible. He was a genius of war and peace and instead of showing his rage, he showed mercy and after some discussion an agreement was made that the Christians would pay a very small amount and can leave the city.

This act of mercy not only saved the lives of 5000 Muslims but also the entire Christian population in the city from the rage of Muslim army who would have soon overtaken it.

The atrocities against the Muslims after the first crusade were still alive in the minds of people. Even the Christian historian described the First crusaders as mass murderers. According to Tyreman in his book ‘God’s War: A New History of Cursades’ he has described the slaughter of Muslim of Jerusalem as “a juxtaposition of extreme violence and anguished faith”. Other historians have cited examples of horses swimming in the blood of Muslim population. Tyerman has further said that “The slaughter continued for days; Muslims were indiscriminately killed, and Jews who had taken refuge in their synagogue died when it was burnt down by the Crusaders.”

Paying the Ransom of Enemy Soldiers

As per the agreement of surrender the Christian army had to pay a sum of 30,000 dinar to the Sultan as ransom. The elite army paid this amount and left the city. But most of the poor soldiers were not in a position to pay the ransom. They were left with no hope and their families came to meet the Sultan for his mercy. According to Malcolm Cameron Lyons in his book ‘Saladin: The Politics of the Holy War’ he has said that Sultan Salahuddin himself paid the ransom amount of hundreds of Christians and provided them an opportunity to leave the city. Muslim historians cite a much bigger number and are of the view that Sultan paid ransom of thousands of soldiers.

Freeing of Prisoners of War

After seeing the generosity of the Sultan towards thousands of Christian soldiers, his brother Al Adil also freed 1000 Christians who were on the verge of becoming his slaves. Christian leaders like Heraclius and Balian also asked for Sultan’s mercy and the merciful Sultan freed 1200 more people without any ransom. 1000 more captives were freed on the request of Muzaffar al-Din Ibn Ali Kuchuk. Sultan Salahudddin also ordered that all the aged people who could not pay the ransom were free and they were allowed to leave the city.

According to Filippo Donvito in his research paper titled ‘Saladin’s Christian hostages and prisoners: Hangman or Gentleman?’ Around 20,000 poor Christians who had no money to pay the ransom were pardoned by the Sultan and were allowed to leave the city. Due to this act of generosity, thousands of Christians converted to Islam.

In the 12th century this act was an unimaginable act. This act of kindness is well documented in the history books and is one of the many reasons to call Sultan Salahuddin as a champion of human rights.

If we see the scenario of the 12th century, then we can say that the status of women was very low and it got worse during wars. Mostly women belonging to the losing side were sold into slavery after their defeat. But here also, Sultan Salahuddin Ayyubi was going to make history.

Protection to the People Leaving the City

Saving of Church of the Holy Sepulchre

When Sultan Salahuddin entered the city after its surrender, some of his advisers told him to destroy the Church in order to end all Christian interest in Jerusalem. But Sultan was a man who had respect for each and every religion and he reminded his advisors about Harzat Omar (RA) the second rightly guided Caliph of Islam that he allowed the Church to remain in the hands of Christians after conquering the city.

So, ultimately Sultan didn’t destroy the Church of the Holy Sepulchre and set forward the example of religious tolerance for the generations to come.

No Arson or Looting of Property

Arson is a crime in which someone willfully sets fire to the property of others. This practice was very common in those times and the winning forces used to burn down the homes and properties of the losing side. Looting was also very common. But when the armies of Sultan Salahuddin entered the city none of such acts were committed by his army.

Jerusalem was a religious center of all the 3 major religions of the world after its liberation by Hazart Omar (RA). All faiths enjoyed the religious freedoms to practice their religion. But this practice of religious freedom was hampered after the first Crusade. The Crusaders barred the Copt Christians from praying.

Sultan Salahuddin brought various reforms of religious freedoms in the city. He allowed the Orthodox Christians and Syriacs to remain and to worship as they chose. The Copts, who were barred from entering Jerusalem by the Crusader kingdom of Jerusalem as they were considered heretics and atheists, were allowed to enter the city without paying any fees and the Sultan treated them as his own subjects. The Coptic places of worship that were earlier taken over by the Crusaders were returned to the Coptic priests. The Copts were also allowed to visit the Church of the Holy Sepulchre and other Christian sites. The Abyssinian Christians were allowed to visit the holy places of Jerusalem without paying any fees.

From the above observations, this could be concluded that Sultan Salahuddin Ayyubi was a champion of human rights. He was man far ahead of his time that showed the world the actual meaning of mercy and forgiveness. His remarkable humanitarian works have made him one of the most famous Sultans of human history. He is very much popular in the Christian world because of his tolerance towards them. On the occasion of human rights day, I think it is our duty to remember him for his contributions in the field of human rights.