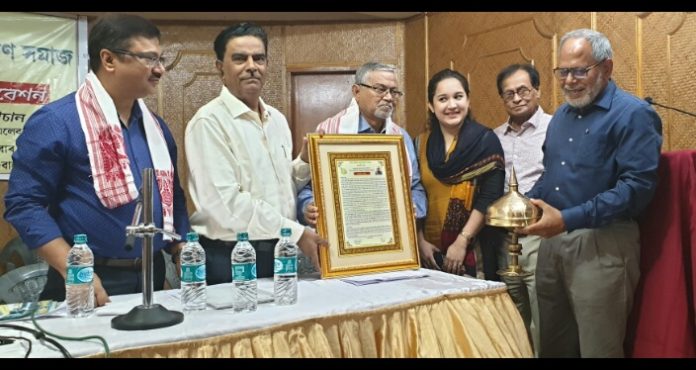 Guwahati,April 28: The 16th annual general meeting of Al-Ameen Welfare Society (AWS), a leading welfare organisation of Assam, was held at the Bishnu Nirmala Bhawan in Guwahati on Sunday. Speaking as the chief guest on the occasion, Mahmood Hassan ACS, chairman, char development authority Assam, presented a stimulating picture of the Sustainable development goals of the Government that aims at ending poverty and hunger while ensuring healthy life in the riverine areas of Assam. Hassan said that all the districts of Assam have drawn up their own agenda that includes issues such as freedom from open defecation, eradicating of rampant plastic use, introduction of farmer friendly practices etc.

Earlier in the day, Dabira Sultana, eminent teacher and writer; Abdul Harmine, social worker; and Iltaf Hussain Hazarika, leading entrepreneur and founder of PIBCO enterprises were felicitated with a memento and xorai in recognition of their lifelong contribution to the society.

Inamul Islam, Secretary General of Al Ameen Society, presented the annual report (2018-19) which highlighted the many socio-economic activities and projects implemented by the society. He said that as many as ten memorial awards were presented to meritorious students by the Society during the year under review. The Society also organised a free health check up camp at Halodha Primary School on March 3, 2019. In addition, Rs 6.14 lakh were distributed as zakat donation that benefited a significant number of families to move from BPL to financially independent status.

The meeting was presided over by Nurul Hoque, President of Al Ameen Society.