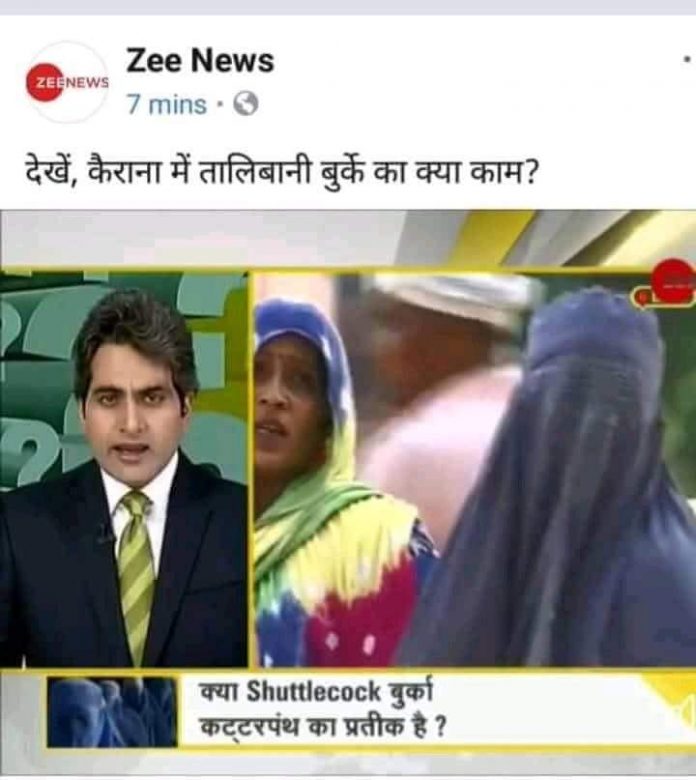 New Delhi: Seeking an explanation from Zee News Dehli Minority Commission (DMC) has issued a notice to the Managing Director of Zee News asking him to file a reply with documentary proof that the women of Kairana (Shamli dist., U.P.) have been talibanised.

In addition to the broadcast, the channel also published a report same day on its website with the headline: “Dheere dheere Bharat ke Musalmanon ko kattar banaya jar aha hai” (Slowly, Indian Muslims are being made extremists). It claimed that Indian Muslims are being Talibanised which it called a “karwa sach” (bitter truth) and said that attempt is being made to change the DNA of Indian Muslims, that Kairana has become a “laboratory” of communalism and of religion-based politics, that “Talibani thinking has crossed Afghani borders into Pakistan and from there it has infiltrated into India”.

“Such comments are a clear attempt to defame a community, propagate disaffection against it and concoct a fake story which has no root or basis since the kind of burqas the channel refers to are centuries-old in India. This clearly is an offence under IPC Section 295/A (deliberate and malicious acts intended to outrage religious feelings of any class by insulting its religion or religious beliefs) and IPS Section 505 (spreading false rumours).” reads a report by DMC

The report further asserts that the broadcast was an attempt to polarize communities and influence voters on communal lines while a by-election was on in the area, which is a punishable offence under Section 171/C of IPC.

The report further reads “If unable to justify its conclusions and remarks with proofs, the channel has to submit a written reply offering unconditional apology and explain what action has been taken against the reporter(s) and staff writer(s) responsible for this false report which spread disaffection against a section of Indian citizens and defamed them on communal and religious grounds. The channel also has to file an undertaking that it will desist from airing such unfounded reports in future. Failing this, appropriate action will be taken by DMC against the channel.”

The channel has been given two weeks’ time to reply to the notice. DMC Chairman Dr Zafarul-Islam Khan said he plans to write to the Election Commission and News Broadcasting Standards Authority to take appropriate action against the channel.