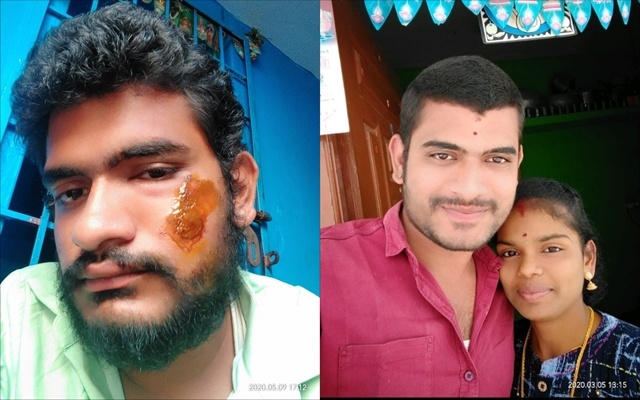 Krishnagiri, Tamil Nadu: A young man allegedly attempted suicide on the night of 23 July after he was allegedly tortured at the Kaveripattinam police station of Tamil Nadu for marrying an upper caste girl and he failed to contact her as she was forcibly married to another man by her family member. Reports say that the police had received a bribe of Rs. 2.5 lakh rupees from the girl’s relatives to do so.

The couple, Karthik and Archana, had married in a local temple on 12 March 2020 after a relationship of five years. They lived in an unknown location in Coimbatore and reached Kaveripattinam police station on 24th March seeking security from the girl’s family, who were searching for them around the town. However, the police kept them in the lockup and after joining hands with the girl’s family, they beat Karthik for around three to four hours on the same night.

A mob, which purportedly belongs to Vanniya Kula Kshatriya, a caste that constitutes the majority in northern Tamil Nadu, had reached the police station and threatened the couple even in the presence of police officials, Karthik’s friend Ram Kumar said.

Karthik was released with multiple injuries on his face and legs. He was unable to even get up for a week.

Harsha Vardhan, a politician from opposition DMK party, says he urged the police to guard Karthik but they did not listen to him.

Police says they have registered a FIR in this regard but they refused to provide its copy to victim’s father, Ravi. K when he sought it. On an important note, Karthik belong to a poor and marginalised family. He earned his incomes by playing drums and trumpets on ceremonial occasions while his father is a daily wage worker.

Karthik’s parents have demanded action against the police personnel and other people involved in the brutality on their son. They have also demanded compensation for their son’s sufferings.