Muslim Mirror
Home Indian Muslim The 45000-acre land of the Waqf Board will be looked after by...
Facebook
Twitter
WhatsApp
Email
Telegram 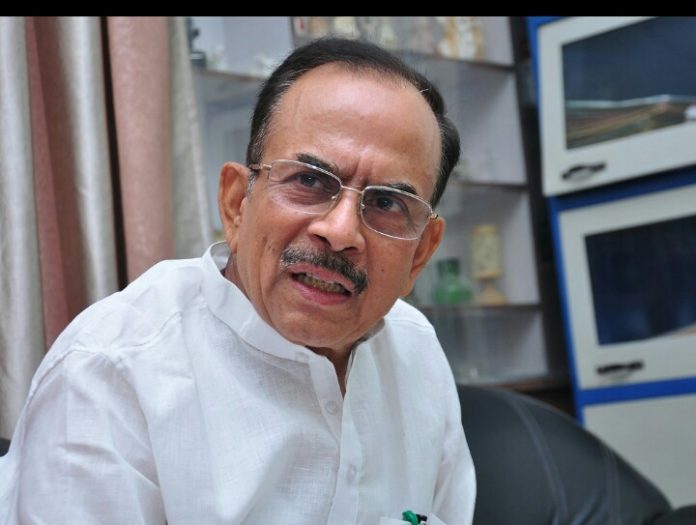 Telangana, the youngest of the 29 States of India, voted the Telangana Rashtria Samithi (TRS) to power again, proffering ruling reins to the State’s first Chief Minister K. Chandra Shekar Rao, or KCR, as he is popularly known, for a second term straight. At his swearing in ceremony, KCR inducted stalwart Muslim face of the party in the State and his former Deputy Mr. Mir Mahmood Ali as the first Muslim Home Minister, the only Muslim Minister and the only Minister in his cabinet, so far.

Taking his appointment as Home Minister in no flattering light, Mr. Mahmood Ali sees the position as a huge responsibility and a defining chance to be of exemplary service to the community and the state.

“At 22 percent, Telangana’s growth rate is like a dream come true. The state is progressing and can be conceived as a model state in India with peaceful law and order situation, progressive policies and pro-development schemes of the government” says Telangana Home Minister Mr. Mahmood Ali.

Good policing has allowed crime rate to fall to negligible proportions. “The state’s police force”, he exclaims, “is number one in the country and has handled the law and order situation very well”.

While swanky new patrol vehicles, pay hikes, new buildings for Police Stations have already boosted the police morale, the TRS government is building futuristic twin towers in the upscale locality of Banjara Hills that will serve as watchdog for the State. The ‘under-construction’ Command and Control Centre will have twin towers – one of 20-storey and another 15-storey building, equipped with surveillance systems driven by Artificial Intelligence powered cameras, advanced monitoring systems, and chambers for the head of the police and the Home Minister himself.

‘Such cameras will be set up all across the state’, he says, adding that ‘enforcement agencies can further improve policing across the state by face tracking criminals or suspects from under one roof.’ Sounds slightly like Hollywood. But that’s true.

Speaking about his second term into government, Mr. Ali says he had very little experience when he was first elected as the Deputy Chief Minister. Nevertheless, “the experience of seeing politics from close quarters and living it during the first term, has empowered [me] with necessary insights to serve the people better“.  In the first term, Mr. Mahmood Ali was the Deputy Chief Minister and overlooked administrative affairs with the IAS officers. In the second term, as the Home Minister he will be working with the IPS officers. “These are intellectual people, working with them will be suave“, he says expressing faith.

Having held the portfolios for Revenue and Stamps and Registrations, Relief and Rehabilitation, Urban Land Ceiling in his first term, Mr. Ali unmistakeably tags the credit to his party for effectuating ‘the revenue records system after the formation of Telangana State. The revenue records were last updated when Salar Jung of the erstwhile Hyderabad first set up the system in 1930s’, he says.

‘125 new mandals were identified escalating the total count in the state to 625 while 40 lakh farmers were given new standardized passbooks, and nearly 25,000 thousand people were given free land’, he added.

“Telangana is the best performing state in terms of revenue”, he adds.

According to Mr. Ali, “the success is result of Chief Minister KCR’s political virtuoso and people-friendly governance. KCR Sahab, as he says, is a bibliophile and has read over 50,000 books. He continuously introspects and has used the same learnings with his political insights to achieve this.”

The party has a massive appeal and won hearts with its pro-development and welfare oriented schemes. Even now, the increase in the retirement age from 58 to 61 years would enable the government to use the intellectual wisdom and experience of senior government officials towards state’s progress. The government’s flagship education project Telangana Minorities Residential Educational Institutions Society (TMRIES) transformed weary, disesteemed and neglected government schools into coveted world-class educational institutions spending over a lakh rupees on each student to provide quality education, food and residence while the Minority Finance Corporation provides financial fortitude to the deserving and the underprivileged.

“The 45000-acre land of the Waqf Board will be looked after by the Revenue Department“, a portfolio Ali previously held. Among the various welfare schemes,  are the party’s plans are to educate the prisoners and empower them with employment-friendly technical education, educate every child in the state with ‘har fard padhega, har fard badhega; (every person will learn, every person will prosper) slogan, crop loan waiver schemes for farmers, Shaadi Mubarak, Rythu Bandhu Path Kanm, promise of delivering 24×7 power supply to agriculture purposes, irrigation projects, etc.

The government also declared Urdu as the second official language of the State next to Telugu, enhanced honorarium of Imams and Moazzams, is providing students with scholarships for overseas education, and promised a controversial 12% reservation to Muslims.

A staunch admirer of erstwhile ruler the Nizam of Hyderabad, KCR often quoted Nizam in his speeches. His roaring welfare schemes have helped the party garner significant Muslim votes. In the words of Member of Parliament from Hyderabad and All India Majlis-e-Ittehadul Muslimeem (AIMIM)  President Mr. Asad Owaisi whose party dominates the Muslim sentiment in the State, “there has never been a better Chief Minister in the history of the State (which was formerly a part of Andhra Pradesh) who has been so inclusive to minorities, and Muslims in particular”. KCR is said to regularly visit Mr. Mahmood Ali’s residence to meet and greet him on Eid-ul-Fitr.

Arguably one of the most powerful ministers in the State, Mahmood Ali has a plebeian yet ennobling tone. He doesn’t indulge himself in flattering light even as his austerity outshines his political persona. Born in Azampura locality of Hyderabad to Peer Mohammed, Mr. Mahmood Ali grew up assisting his father in business from the age of 10. He pursued Bachelors in Commerce, and later dropped out of LLB to help his father in business. Inducted into politics after the formation of TRS party floated by KCR in 2001, Mr. Mahmood Ali actively supported the agitation for formation of Telangana as a separate state.

In 2002, he contested the Municipal elections for the post of a Corporator and lost. In 2009, he contested for the post of Member of Parliament  and lost again, but did not give up. In 2010, he was elected as the Member of Legislative Council (MLC) in the Andhra Pradesh Legislative Council. In 2013, he re-elected as the MLC before being appointed as the Deputy Chief Minister of Telangana after the formation of Telangana State in 2014. In 2018, Chief Minister KCR inducted Mr. Mahmood Ali as the party’s Muslim face in his cabinet, rewarding his loyalty and long-time association with the Ministry of Home portfolio. Mr. Mahmood Ali succeeds Mr. N. Nayini Narsimha Reddy as the Home Minister of Telangana State.

Moments before swearing in as the Home Minister, Mr. Mahmood Ali took a moment to greet and wave at the public for his victory before walking to the Chief Minister KCR even as the latter rose in reverence and waited in his place to welcome his long-time associate for the oath.

Mr. Mahmood Ali has two daughters, and a son Azam Ali Khurram who overlooks party’s regional activities as the General Secretary. He praises his wife for her consistent support throughout. He does not shy away from declaring that Muslims have contributed a lot to the party’s landslide victory in the recent elections.

As the party prepares to influx winning members in the cabinet, whether the ‘initial enthusiasm’ that helped the state set milestone continues remains to be seen. Meanwhile, the government is pressing hard for education, terming it as the most powerful tool for peace, ubiquitous welfare and persistent prosperity.

“We are planning to go national, and expand beyond Telangana. Our CM wants to build a non-Congress and non-BJP front that focusses on development, welfare and prosperity, and with proper planning, this is achievable”, he concluded.

Syed Khaled Shahbaaz is an Indian journalist based in Telangana’s capital city of Hyderabad. He may reached over phone at +91-9652828710 or on email at syedkhaledshahbaaz@gmail.com