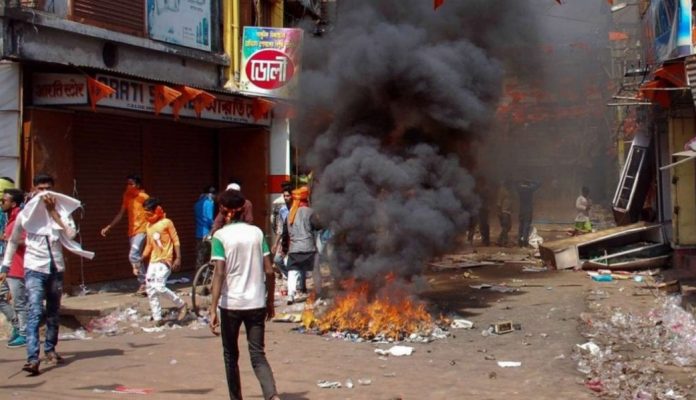 India had remained an amphitheater of communalism for the last three-four decades. During this time the value of constitutional secularism was doomed to stumble here and there in the corridors of political power. In the eighties and nineties of the 20th century, there was a possibility that the society could be swept away by the flood of communalism at any critical juncture. That turning point came in the second decade of the 21st century, and soon the society started flowing in the fast flood of communalism. One can see easily that the different shades and manifestations of the communal politics have percolated in the veins of the Indian society creating bitterness and hatred among religious communities. As a result, the political response of religious communities in elections has been directed firstly by their religious or caste identities, thus further strengthening the communal politics.

A society that flows in the flood of communalism for a long time, lets all its determinants as a nation – legislature, executive, judiciary and various constitutional democratic institutions – come under its grip. The politics that drives all this becomes an arena of communal scheming; The ‘fourth pillar of democracy’ gets uprooted from its axis; Religion is reduces into a puddle; Philosophy and the arts revolve around vague points seeking refuge; Intellectual discourse tends to become selfish and discordant; And civil life becomes filled with hatred, animosity, mistrust and fear. This is a very bad situation for the health of any society. Therefore, measures must be taken to stop the ongoing flood of communalism.

In the wake of the Kashi and Mathura disputes, the stage has been set to release more waters in the ongoing communal flood. Tahir Mahmood, being an expert of the Constitution and a constitutionalist has expressed the hope that Muslims should leave their claim on major places of worship and play a role in restoring peace in the society. (‘We the people’, Indian Express, 28 May 2022) Mehbooba Mufti has put forth a suggestion: “If taking away mosques solves problems, let them.” (Indian Express, 12 May 2022) But the matter is not as simple as that. It is clear from the statements that have come from the RSS/BJP leaders that “this is not a conspiracy to repeat the Babri-Masjid Ram temple dispute”, but an open declaration.

The RSS chief has declared that India has become a ‘Hindu-Rashtra’. He believes that ‘Akhand Bharat’ will be established in the next 15-20 years. He repeats these claims time and again. Let’s not talk about ‘Akhand Bharat’ for the time being. ‘Hindu-Rashtra’ has its own declared demands. Under this, the ‘truths’ of thousands of years ago have to be brought to the fore, and the ‘mistakes’ have to be corrected. The list is quite long –  placing Hindu-claim on historical buildings with mosques, changing Muslim names of cities-towns-villages-roads-gardens-stations etc., purifying  the assimilation (read distortion) at the level of civilization-culture-art-literature-language-script etc., establishing uniformity by rejecting the various streams of Hinduism in the name of Sanatan Dharma, intensifying efforts to integrate Buddhism, Jainism and Sikhism into unified Hinduism, enacting laws targeting Muslims in the name of Common Civil Code, glorifying its icons who opposed the freedom struggle and supported the British by calling them visionary in favor of ‘Hindu-Rashtra’, throwing away the burden of icons like Gandhi and Ambedkar when the opportune time came so on and so forth. Finally, a plan to completely change the socialist and secular character of the Constitution. (It would be pertinent to note here that a large section of progressive and secular intelligentsia aptly advocates constitutionality in communal matters but supports liberalization/privatization i.e., making of Nigam Bharat or corporate India, which is equally anti-Constitution.)

It is not that the RSS will be able to do all this. All this is a hoax done for the sake of political power and money power. But due to all this, the future of India will be filled with many communal disputes for a long time. The recent statement of RSS chief that ‘why look for a Shivling in every mosque?’ has been much publicized even by the secular intelligentsia as if he is a supreme authority of Hindu religion or a beholder of constitutional value of secularism! He and his organization, in fact, have been a main driving force behind the communal flooding of the society.

There will also be no shortage of scholars who give air to the disputes in an open or hidden form. Recently, sociologist Badri Narayan has declared Prime Minister Narendra Modi’s capital of communal hatred, falsehood and deceit as capital of public trust. (‘The Trust Vote’, Indian Express 25 May 2022) Scholar of history M Rajivlochan has rightly said that when the truth of the destruction of Hindu religious places by Muslims came to the fore, some people start talking about the destruction of Buddhist and Jain religious places by Hindu kings. (‘Violence of monotheism’, Indian Express, 28 May 2022) But he does not say that independent India was decided by its leaders to be a secular state despite knowledge of such incidents in the past, and called for establishing the dignity of India in the new world on the basis of new values, leaving behind the conflicts of the past. Rather he says that only stray historical evidences are found about destruction of Buddhist and Jain religious sites by Hindu kings while the Muslim invaders continued a series of massacres of Hindus, destruction of religious places and desecration of idols from the 11th century to the 17th century, until they were stopped by the Marathas.

As a student of literature, I wonder how it was possible, then, to have such a diverse and rich Bhakti-movement and its literature on an all-India level during that dreadful period of 700 years! How many folk arts such as Ramlila, Raslila, Yakshgan, Baulgan etc. and certain classical arts, drama, performances, decoration, singing, and so on, flourished continuously on the basis of Bhakti literature! How the philosophy of Vallabhacharya (Shuddhadvaita – pure non-dualism), Ramanujacharya (Vishishtadvaita – qualified non-dualism), Madhvacharya (Davita – Dualism), Nimbarkacharya (Dvaitadvaita – dualistic non-dualistic) who gave the philosophical basis to the Bhakti-movement became fruitful and wide spread! I have mentioned this because the author says that there has not been a strong stream of monistic or monotheistic Brahma-Chinatn in India. The truth is that the philosophy of the above mentioned four philosophers is born out of the mutual rubbing of Advaita and Dvaita.

All the Nirgunvadi and Premakhyanvadi (Sufi) poets of the Bhakti period are believers of monotheism. Tulsidas is a Sagunavadi, but he has advised not to see the distinction between Saguna and Nirguna. In addition to the philosophers mentioned above, Shankaracharya’s philosophy of Advaita Vedanta is noted in the 8th century, the tradition of which is found in Ramakrishna Paramhamsa and Vivekananda. Some scholars also believe that Islam’s concept of monotheism is a contribution of the Upanishads’ philosophy and later Indian monistic philosophy.

The article also seems to suggest that the RSS/BJP are the proponents of polytheism in India. Whereas the RSS/BJP has no serious relationship with Bahudevavad (polytheism), nor with monotheism. Despite this the author raises the question of monotheism-polytheism, he does not see that people with frustrated and obtuse mentality cannot enter the world of philosophy and Bhakti. The author shifts in one go from the medieval to the twenty-first century, and cites Islamic terrorists/Taliban to render the fundamentalist core of Islam. It is true that many scholars hold this belief about Islam. It is also true that there are some fanatical Muslims in India who have no tolerance and perceive other religions as inferior. It is also true that Muslim youths from India, albeit in negligible numbers, have joined the jihad of Islamic fundamentalists in other countries to establish a caliphate. It is true that many Muslims seeking secularism in India consider the theocratic states of Islamic countries to be natural and worthy.

But is this number more than the fanatical Hindus who massacred thousands of Sikhs in the nation’s capital? Who took pride in participating in the state-sponsored massacre of Muslims and rape of women in Gujarat? Who, from the time of Ram Mandir movement till today, do not hesitate to abuse Muslims, commit lynching, make loud calls to shoot them, take up arms against them, threaten to rape Muslim women? Who burned alive Graham Staines and his two children, who occasionally go to the churches and vandalize them? If it is true of a section of Hindu society but cannot be radicalized on a large scale, then it is also true of the Muslim society of India.

In fact, there is need to understand the mind-set of those scholars who in their rhetoric went beyond the values of the freedom movement and the Constitution while proving India a “civilisational state” (‘Idea of India, before and beyond’ Shantishree Dhulipudi Pandit, Indian Express, 24 May 2022), before scrutinizing them academically. These people do not make any observation on incidents sloshed in communal hatred. But in their effort to show themselves as civilized in the family and society, they maintain the illusion of being the carrier of great civilization. It is well known that considerable work has been done on traditional Indian knowledge systems with critical appreciation by scholars from home and abroad. These scholars should need to work on Indian knowledge systems instead of rhetoric, following a globally determined methodology of research.

Dr. Lohia’s warning was that if the fanatics existing in Hinduism won, they would break the Indian nation into pieces. The communal forces of the day have broken the Indian nation to a great extent from within. It should not break from the outside too, and the breakage inside should be removed as soon as possible. Such an effort should be made by everyone though hardly anyone has a ready-made answer to the question of how this will happen. However, those who do this work must be freed from the captivity of bigotry. And, at the same time, from shackles of the slavery of neo-imperialism.

(The writer associated with the socialist movement is a former teacher of Delhi University and a fellow of Indian Institute of Advanced Study, Shimla)