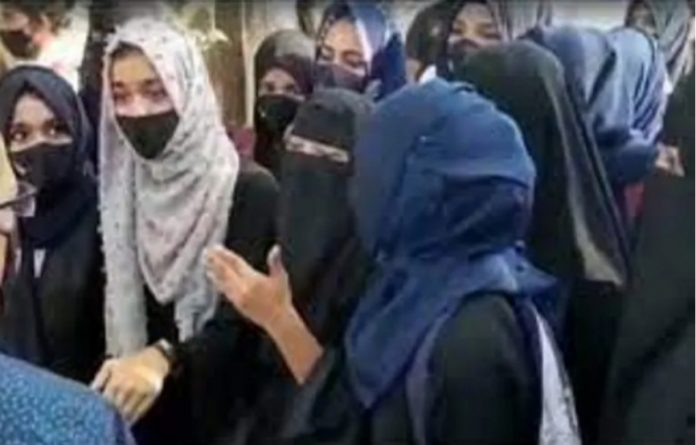 Srinagar May 6: While India is battling communalism and Patriarchy through Hijab, Kashmiris living in different parts of the country are facing a dread from the Hindu nation. Soon after Rishi Trivedi, president of the Hindu first group Akhil Bharat Hindu Mahasabha stated “We are a Hindu nation and we do not want to see any kind of religious outfit in educational institutes of the country”, many female Kashmiri students out of fright choose to remove their headscarf.

Fearing trepidation from the extremist group, huge number of Kashmiri students had to move to Muslim areas in order to avoid any hapless situation. While activists and critics of the ban are terming the move as an attempt to marginalize the Muslim community, Kashmiris have faced the burnt since really long.

“I am a student and alongside I am working with a reputed company in Noida. Since Noida is having non-Muslims in majority, soon after the Hijab Controversy, I had to remove my Hijab while going to my workplace in order to avoid any unfortunate incident. Kashmiris have been a soft target during every situation and fearing escalation, I had to move back to Kashmir as the situation seemed full of antagonism,” said a student on the basis of anonymity.

There have been attempts from local population to make Kashmiris feel alienated after questioning them about their identity and denying them the rented accommodation. Both Muslims and Hindu in various parts of the country look with suspicion at Kashmiris and often times try to harass them.

“While I was studying in one of the top Universities in Delhi, I rented an accommodation in a Muslim Ghetto in order to feel safe in the area. Soon after the houseowner saw my Aadhaar card, she made me pack my belongings and asked me to leave the room on immediate basis. Besides this I have been denied pick-up by OLA and Uber Cabs after seeing my surname as “Wani” on the profile of the App,” said Mehak (name changed).

While commuters in Delhi are being ensured smooth travel across the state, the state government failed to provide a safe commute to the Kashmiris living in Delhi. The frisking at various metro stations for Kashmiris recognized by their appearance and dress code is quite atypical.

With no hopes from the central government, the traditional parties from Kashmir have also shared a deafening silence to address the plight of students suffering in various educational institutions in India thus limiting the issue to their twitter handles.

After facing the deepening blatant discrimination and stereotyping, parents of Kashmiri children had to give a second thought for allowing their children to study outside the UT. Besides this, Kashmiri students are lagging behind from the rest of the students in India due to frequent internet blockade, restrictions, closure of academic institutions and lack of quality education and diversity in academic courses in the valley.

Along with the hateful speeches by Hindu extremist groups, the national media has also contributed in adding to the plight of Kashmiris through their false narrative and representation of Kashmiris. Despite Kashmir being the safest place for tourists and students, Kashmiris on the other hand are facing unending brutalities in and across the country with zero hopes from the government.