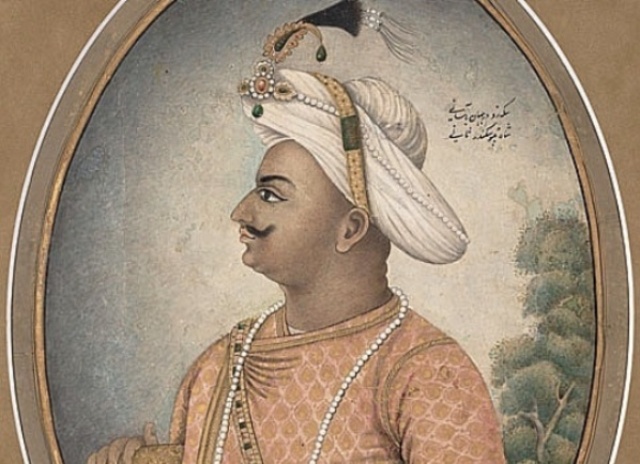 Emperor Meiji is credited with making Japan a modern nation and putting it on the track to become a world power. A century before that the king who could have been the Indian Mejii and kept India relevant as a world power died on the battlefield Today is his 219 Anniversary.

On May the 4th, 1799, the final battle of a series of four wars was concluded and we lost that chance with the death of Tipu Sultan of Mysore at the hands of the British, assisted by the Marathas, Hyderabad, and Travancore.

We should celebrate Tipu’s courage as he famously rejected the advice to flee or surrender as his ally Napoleon did twice and instead chose to die protecting his kingdom and his people. He famously proclaimed that it was better to live as a tiger for a day than to live as a jackal for a century. Sadly, there are only a few among his admirers who focus on Tipu the visionary. He was a brilliant general, a radical economic and social reformer, and a great geostrategist.

He knew that to defeat the English and to throw them out of India he needed to have a blue water navy, foreign ports, and international allies. He offered the Ottoman Caliph one of his Indian ports in exchange for Basra in Iraq so that he could wage a naval war against the British on the high seas. He made an alliance with the French and corresponded with their rising general, Napoleon. He supported the American war of independence both morally and financially. He was the first Asian ruler to recognize the newly independent United States. Interestingly, another Sultan, the Sultan of Morocco, was the first African ruler to recognise the newly independent country.

Yes, President Trump: while your ancestors in Germany fought with the British against General Washington, these Sultans supported the United States from its very birth.

No wonder General Harris, the commander of the English army, declared “today India is ours” when he heard of Tipu’s death. Tipu was the most feared eastern king. The English demonized him as “the tyrant.”  When he died, there were jubilant celebrations in Britain, with authors, playwrights, and painters creating works to celebrate his death. The siege and looting of Tipu’s capital at Srirangapattana is the opening scene of Wilkie Collins’ famous novel The Moonstone. Sadly, some Indians have unthinkingly accepted that false British historiography.

America has other connections with Tipu. General Cornwallis, who had to surrender to Washington at Yorktown in 1781, was able to redeem himself by defeating Tipu.  Washington was saved by his French allies, but by the third Mysore war, France was in revolutionary upheaval.  Tipu marched from the West Coast of India to the French fort at Pondicherry on the East to urge them to join him but they would not do so.

The English Congreve rockets that the US national anthem refers to as they rained down on Fort McHenry in the Baltimore Harbor during the War of 1812 were based on the invention of Tipu’s war engineers.

Tipu was the original technological innovator of India, the technology buff who modernized warfare. He built what were really technology parks all across his kingdom. He introduced groundbreaking innovations in the economy and is perhaps the founder of the cashless economy as early as the eighteenth century.

He was a progressive and enlightened ruler who rebuilt  Hindu temples that were destroyed and looted by the Hindu Maratha army in his kingdom, including the famous holy temple Sringeri Math. He instructed that his non-Muslim officers be guaranteed that the food provided to them would meet their religious requirements and that they are allowed to take their oaths of office according to their own religious beliefs. Tipu was not a pluralist liberal democrat as he was not born in the twentieth century nor was he a saint. But he was no fanatic or tyrant.

He was fascinated by the philosophies and idea that had led to the French revolution and even declared himself “Citoyen Tipoo”. His tolerance is reflected in his annual grants to no less than 156 temples, which included land deeds and jewellery. His army was largely composed of Shudras. The high esteem in which Tipu held the Hindu holy men of his kingdom is clear proof that he was a tolerant ruler.

If his fellow rulers of the Indian subcontinent and their nominal Moghul emperor in Delhi had been half as enlightened, nationalistic, and visionary as him, not only would the English have been thrown out but India would go through the “Meiji Restoration” period Japan had a hundred years later in the 1870s. India thus could have maintained its place as a first-class economy in the world.

Alas, that was not to be the case, and on the fourth day of the fifth month of the last year of the eighteenth century, the Tiger of Mysore fell fighting the English. The traitors in his court, both Hindus and Muslims (Mir Sadiq and Purniyah), had sold him out to the British.

It was the cannons of the Nizam’s army, the ruler of neighbouring Hyderabad, that caused the breach in the wall of Tipu’s fort. Tipu was hoping to hold out for another month until the monsoons arrived and forced the English to lift the siege, but the traitors in his court had informed the English about the weaker sections of the walls of the fort. Tipu was made aware of the breach on the 3rd. He expected the attack to happen at night on the 4th as the English knew that he had posted his best soldiers there and would not dare to cross the river Cauvery under their fire during the daytime. The traitors pulled the defenders away, asking them to go and collect their salary. When the news reached Tipu who had just sat down to eat his lunch that the English had broken through, instead of fleeing as his friend Napoleon had done, he left his lunch and rode into the thick of the battle and died like a cornered tiger fighting to his last breath.

The sunset on the Western horizon and sent India into a long, dark night that lasted a century and a half.

The heavens opened up and the unexpected storm was considered a sign of divine lament. The looting of Srirangapatnam that began that night at the hands of the foreigners ended on August 15th, 1947, and by then India, which was the largest economy in the world under the Moghuls in 1700, had become the 141st.

It is said that a nation that does not study its history will not learn from its mistakes and so cannot become great. I wish Indian children to learn about their great and complex hero.  I pray India stays united and is a tolerant democracy, by the 300th anniversary of Tipu’s valiant death as I hope India will once again become the world’s largest economy. And that is just eighty years away.

-An earlier version of this article had appeared in DailyO