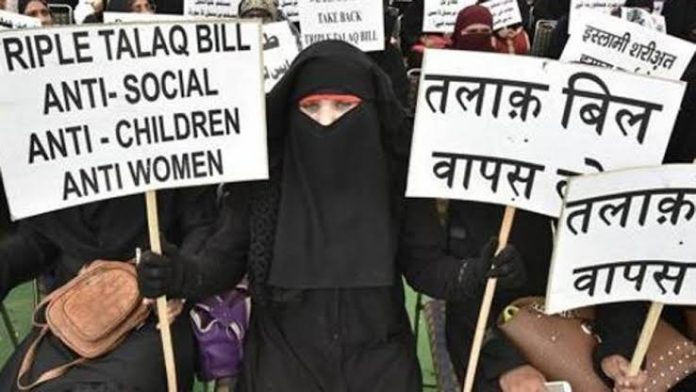 New Delhi: The government is likely to take Triple Talaq Bill for consideration and passage in the Lok Sabha on Thursday. Congress is all set to oppose the Bill in the current form saying it should consult with the community to codify it holistically.

The BJP sources said that the party has issued whip to its MPs to be present in House when the Bill is brought for passage. Following the government”s move to bring the Bill to ban Triple Talaq, the Congress hit back saying the community should be consulted first.

“Triple Talaq Bill makes a dramatic appearance in Lok Sabha today. A deflection from Modi”s invite to Trump to intervene in Kashmir? If NDA/BJP is keen to intervene in Muslim Personal Law why does it not consult community and codify it holistically like Hindu Code Bill in 1950”s?” Congress Lok Sabha MP Manish Tewari tweeted.

The Muslim Women (Protection of Rights on Marriage) Bill, 2019 was tabled in Lok Sabha on June 21 by Union Minister Ravi Shankar Prasad amid opposition members have demanded that wider consultations involving the entire spectrum of political parties should take place before its introduction.

The opposition is against the bill in its current form, contending that it would end up victimising Muslims. Even NDA ally Janata Dal-United (JdU) is against the Bill.

While the Bill is expected to have a smooth passage through Lok Sabha as the government has a clear majority there, it is, however, set to face roadblocks in the Upper House where it is still short of the majority.

The Bill, which proposes to make the practice of instant triple talaq (talaq-e-biddat) a penal offence, was introduced in December 2017 but was pending in the Rajya Sabha and had lapsed owing to dissolution of the 16th Lok Sabha last month.

The government had promulgated the Ordinance on triple talaq twice — in September 2018 and in January 2019 — as the contentious bill remained pending in the Rajya Sabha.

The Bill makes declaration of talaq, including in written or electronic form, to be void and illegal. It defines talaq as talaq-e-biddat or any other similar form of talaq as the practice under Muslim personal laws where pronouncement of the word “talaq” thrice in one sitting by a Muslim man to his wife results in an instant and irrevocable divorce.

It makes declaration of such talaq a cognizable offence — where the accused can be arrested without a warrant, and liable to a punishment of three years imprisonment and fine.