No sooner did the news break that India is gearing up its defenses to formulate its ‘three military commands within three months’, on November 22, as per The Hindustan Times 1 , in order to meet to the challenge from China, and also to wrest Gilgit-Balistan, parts of Pakistan occupied Kashmir (PoK), there had been a scramble inside Pakistan, which made Pakistan to desperately reach out to Turkey, as Pakistan PM Shahbaz Sharif made a visit to Turkey on November 24, where it was discussed by Turkey’s President Taiyyip Erdogan, to send its paramilitary military forces to PoK and Palestine. Palestinians have long been demanding Turkey for the same, as Palestine had been once a part of the erstwhile Ottoman empire before Israel was carved out of it in 1948. 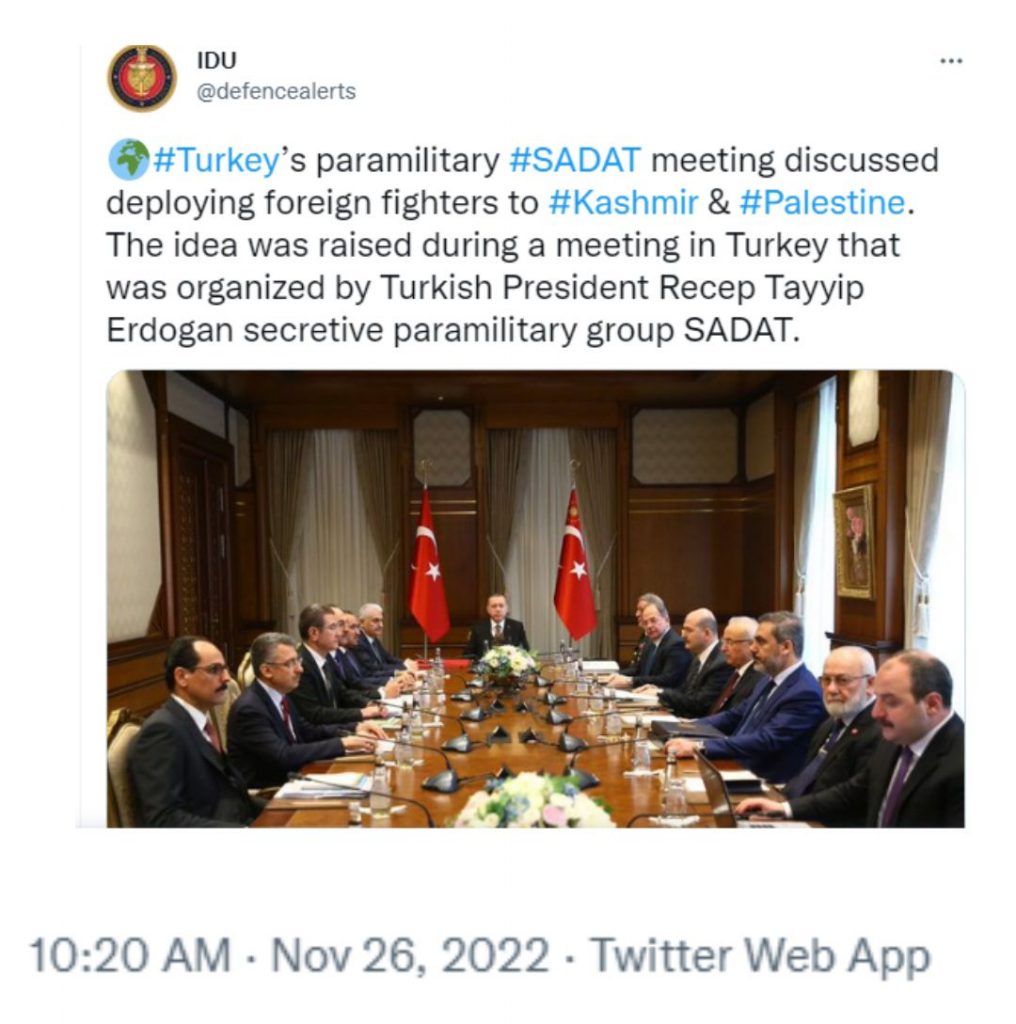 The move is quite alarming for the Indian establishment as Indian Defense Updates twitter on November 26 has highlighted over the same. The issue has every potential to snowball in the coming time. What matters here is also to mention that Taiyyip Erdogan has a tradition of meddling in the Kashmir issue, by raising it at United Nations, Pakistan, while also on his visit to India in May 2017, during which he had suggested a multi-lateral-dialogue on Kashmir through Turkey’s mediation. No wonder, India had a clear view of Erdogan’s stand, hence, India had sent its Vice President Hamid Ansari to Armenia, in April 2017, a few days before Erdogan’s landing up in New Delhi. Turkey and Armenia have been traditionally at odds. After India’s PM Narendra Modi annulment of Article 370 which gave Special Status to JK&L in August 2019, Modi’s proposed visit to Turkey in October 2019 was also called-off.

It is being debated that Turkey is soon to dispatch its secret private army ‘Sadat’ to fight in PoK, as has been highlighted by Nordic Monitor 2 on November 24, but what matters here are the timings, as firstly it was Taiyyip Erdogan who took the meeting and also that Pakistan PM was present in Turkey. Such threats however have been quite vocal in the past too, as Lokmat Times 3 on February 21, 2021, about an year and a half back, had highlighted the same concerns, that Turkey was readying to send its military forces into Kashmir.

If the perspectives put through the world press are put together, then it seem to be becoming clear that this fresh discussion ( around Sadat) seems to have reached its advanced stage, which assumes more significance, particularly when the whole world is passing through a very fragile phase due to the raging Russia-Ukraine war, with all kinds of reports of Iran, Syria etc fighting alongside Russia while Israel, European Union, NATO and US giving full support to Ukraine. India has since the outbreak of the war in February remained neutral.

Erdogan has also declared on the occasion to form a trilateral group comprising Turkey, Pakistan and Azerbaijan. What matters here more is that Pakistan had fully supported Azerbaijan in the war against Armenia (September-November 2020) and does not even recognize Armenia as a country, while India had thrown its weight behind Armenia. Turkey had stood like a bedrock behind Azerbaijan. There is a strong possibility of Turkey ‘putting up’ in PoK, the same way it had trafficked thousands of them into Azerbaijan, as after all, this private army i.e. Sadat does not fall under the terrorism category! Most of such groups inside Pakistan, which are supportive of Pakistan army, are under the UN designated ‘terrorists list’, which had made Pakistan to fall into the grey-list of Financial Action Task Force (FATF), from which eventually it has upgraded itself into the white-list on October 21. Ironically, Turkey names ‘Sadat’ as ‘international defense consultancy construction Industry and trade Inc’, informs ‘Sadat’ website 4 which is available with services to friendly countries.

Turkey knew it well that being a member of NATO it would never be able to make its military enter into operations worldwide, thus ‘Sadat’ came into formation, which is a whole set of army available for services, and can be categorized as ‘paid-soldiers’. It has in the last 10 years received more than 35 million US Dollars, according to the Turkish news outlet Ahvalnews 5. India had raised its concerns when it was involved into co-operating with Pakistan Air Forces, told ANI 6.

How will India strategize its response after ‘Sadat’ lands up in PoK? As according to France 24 7 over the years ‘Sadat’ has become Turkey’s number one ‘secret-weapon across North Africa and Middle-East’. This will leave India with little choice but to arm Armenia against Azerbaijan, towards which Russia is also skeptical about, as Russia had sided with Armenia and had to work-hard to broker a ceasefire between the two nations in November 2020. India therefore, has already signed a deal to export military ‘artillery, rocket launches and ammunition ’ to Armenia, informs The Economic Times 8 on October 6, as Armenia Defense Minister Suran Papikyan had met Indian counterpart Rajnath Singh on the sidelines of the DelExpo in Gandhinagar in September last.

It is now more than clear that Turkey and India have a clash-of-interests, and Turkey has sided with Pakistan in comparison to India, therefore, India is also to push-against Turkey, to make it remain in the grey-list of FATF for a long time, and also to court Russia with a pro-Armenia stand, but here India will need to exercise its ‘diplomacy at its best’, despite Russia being the main provider of defense to Armenia, yet Russia is also critical of India going into the Japan led QUAD group which has US, Australia in it too, for the sake of China, which is Russia’s best partner right now against US.

In case China goes to war with US over Taiwan, and India and China are locked in a war in the Himalayas with Pakistan by the side of China, it is to be a very grim scenario for the world. Turkey, however, has given a support-system to Pakistan, which has been into a great turmoil since its outgoing PM Imran was ousted in April, at the behest of US. Let’s see what is the happen as next as the Russia-Ukraine war is still going unabated with the world watching it with bated-breath. Can the world afford a new war!

UAE hints at huge investment in Pakistan amid economic turmoil