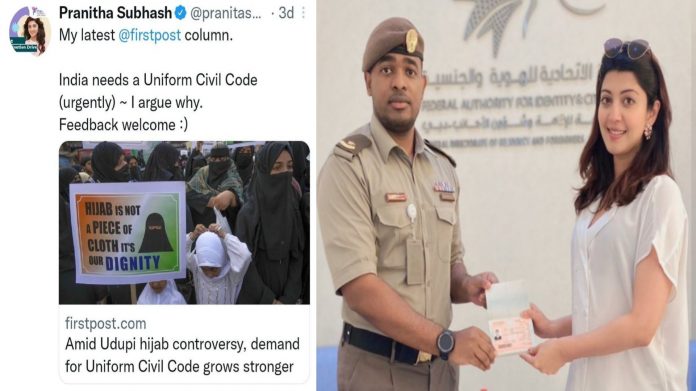 Actress Pranitha Subhash has been granted a Golden Visa by the United Arab Emirates (UAE). She is now authoritsed to live, work and study in the UAE with 100% business ownership.

A few days ago, she had written an article pressing for Uniform Civil Code in view of the controversy over hijab in Karnataka. In the article, which is published on First Post, she portrayed hijab as an outcome of patriarchy and alleged role of “shadowy political players” in the controversy.

Honoured to receive the Golden Visa from UAE 🇦🇪 pic.twitter.com/y5RtdtpX7R

Muslim students and staff have been subjected to humiliation for wearing hijab in Karnataka and other states as well. They have been forced to take off hijab before entering campuses.

The Karnataka High Court is hearing petitions filed by hijab-wearing students. The court has issued an interim order disallowing hijab or any other form of religious dresses in classrooms.