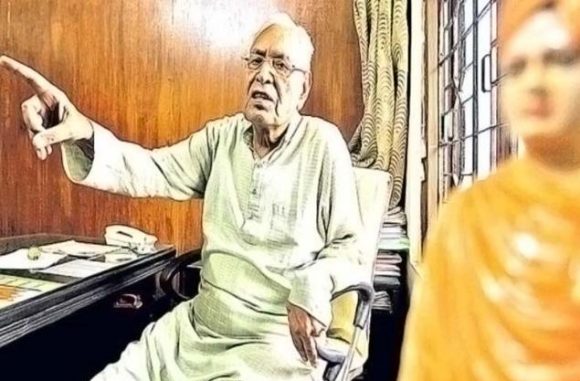 The RSS brigade is fond of surgical strikes. Though there rages a dispute whether surgical strikes against Pakistan secured any favourable results but so far as its surgical strikes against minorities, specially Muslims and Christians and Dalits are concerned, are paying rich dividends to it. The lynching, maiming and robbing in the name of ‘ghar wapsi’ (forcible conversion to Hinduism), ‘Holy Cow’ and ‘Vande Matram’ as part of this strategy aimed at attacking the human wealth of India. But it is also working overtime to destroy the soul of democratic-secular India by attacking all that has been positive in the Indian education.

It is true that apparently it is busy in waging war against universities like Hyderabad Central University, JNU and Jadavpur University as these Universities heroically resisted the Hindutva take-over by the ABVP and pracharak vice-chancellors. The latest in this deplorable saga is that JNU VC has demanded display of army tank at the Central Universities specially the JNU campus. This demand for symbolic display of this army hardware is a precursor of a scenario when active army columns with tanks will rule such universities as happened in Bangladesh under Pakistani military rule and Indonesia under General Suharto. In fact, this warning was given in clear terms by a perennial hate-monger against right to dissent, G D Bakshi at JNU in the presence of many Central ministers that after “victory over JNU” there “are many forts like Jadavpur and Hyderabad University which our army will capture”.

Apart from physical attacks and threats of elimination to these centres of learning, a more insidious game-plan of RSS is unfolding through RSS pracharak, Dina Nath Batra. He, as a father-figure of the RSS demolition squad against the largely liberal-democratic-secular system of school education which aimed at producing inquisitive young scholars who would question the status quo. Batra has come out with a new HIT LIST to be cleansed from educational content.

According to press reports RSS-affiliated Shiksha Sanskriti Utthan Nyas headed by Batra sent to the National Council of Educational Research and Training (NCERT) five pages of recommendations for removal of certain contents from school text-books. This Nyas had earlier succeeded in getting removed renowned historian, A K Ramanujan’s book ‘Three Hundred Ramayanas: Five Examples and Three Thoughts on Translation’ from the syllabus of University of Delhi. This work chronicled the hundreds of versions of Ramayana which existed in the Indian past in different regions of India thus challenging the singularity of the text of this Epic which Hindutva brigade wants to declare as a Holy Scripture. The Nyas also forced Penguin India Publishers to withdraw an original amazing work Hinduism titled ‘The Hindus: An Alternative History’ by renowned American Indologist and Sanskrit scholar, Wendy Doniger. The Penguin under immense pressure from the Hindutva organizations did not even bother to inform the author about withdrawal of her book.

It is to be noted that before targetting NCERT text books via Batra, RSS/BJP governments in Rajasthan, Gujarat, Haryana and MP have removed/curtailed references even to Gandhi and Nehru and added glorification of personalities like Savarkar.Emboldened by such successes school text books at the national level are the target now.

Some of the items in the Batra HIT LIST are hilarious and exhibit brazen gender discrimination of the RSS.  For instance from a grade IX Hindi book explanatory-note of  a poem by renowned Hindi poet, Ramdhari Singh Dinkar has to be removed as such contents “misguide children and cause the loss of their character”. Another content whose SHUDDHI has been demanded is a chapter on the great Kannada Bhakti poet Akka Mahadevi which describes of an incident in which she took off her clothes in protest. According to Batra such “description of naked women” is an “attack on Hindu culture in the name of women freedom”.

Batra also demands that an extract from the 19th century activist Tarabai Shinde’s milestone book A Comparison Between Women and Men, which attacks patriarchy and is considered the first feminist text in modern India should be removed from class VIII text book. All references to Varna system need to be dropped too.

REMOVE REFERENCES OF VIOLENCE AGAINST MINORITIES

Over-all, the removal/rectifications demanded in the NCERT text-books by Nyas follow a pattern determined by the Hindutva discourse of polarization. Any reference to violence against minorities in the text-books needs to be removed. The references to the apology tendered by former PM Manmohan Singh over 1984 riots (which was in fact, genocide of Sikhs) must be deleted. The objection is to the following text in the class XII political science book. “During his parliament speech in 2005, Prime Minister Manmohan Singh expressed regret over the bloodshed and sought an apology from the country for anti-Sikh violence.”

Another sentence that “nearly 2,000 Muslims were killed in Gujarat in 2002” must be deleted. Demanding no discussion on ‘riots’ the HIT LIST decrees: “Several things (in these books) are baseless, biased. There is an attempt to insult members of a community. There is also an appeasement… how can you inspire children by teaching them about riots?” Thus, recurring violence against minorities is to be kept out of memories of students.

The Nyas also demands that medieval Sufi mystic Amir Khusrow (1253-1325) should be identified as a person who “increased the rift between Hindus and Muslims”. There cannot be a lie worse than this one. Am?r Khusrow was the person who laid the foundation of modern Hindi which Hindutva gang identifies with Hinduism and demands it imposition on whole of India as Hindavi. He wrote in Sanskrit, Persian, Arabic and Punjabi. He is credited with the development of qawwali as a singing genre, dastangoi, an art of story-telling and musical instrument like tabla and harmonium. Due to his Sufiism and liberal outlook about Islam he remained an eyesore of Muslim clergy and Delhi rulers throughout his life.

The Nyas also demands deletion from school text-books writings and thoughts of one of the greatest literary-cultural icons of modern India, Rabindranath Tagore. Tagore a great poet, dramatist, author, musician, calligrapher, sculptor, orator and painter and recipient of Nobelprize for literature needs to be censured because “an attempt has been made to show a rift between nationality and humanity by citing thoughts of Rabindranath Tagore”.

It is true that Tagore with many great contemporary philosophers of the world like CHJ Hayes, Renan, EJ Hobsbawm and BR Ambedkar condemned the concept of nationalism as it fostered the growth of sectarianism, separation and violence against ‘others’ who were different from ‘us’. According to Tagore: “The idea of the nation is one of the most powerful anaesthetics that man has invented. Under the influence of its fumes the whole people can carry out its systematic programme of the most virulent self-seeking without being in the least aware of its moral perversion,in fact, feeling dangerously resentful if it is pointed out”

Tagore was the person who not only penned National Anthem of India but also of Bangladesh. Tagore despite being opposed to poisonous nationalism was a great patriotic Indian. He returned all awards as protest to the barbarous massacre of Indians at Jallianwala Bagh, Amritsar, by the British army in 1919. While renouncing the awards he wrote to the then Viceroy, Lord Chelmsford: “The time has come when badges of honour make our shame glaring in the incongruous context of humiliation, and I for my part, wish to stand, shorn, of all special distinctions, by the side of those of my countrymen who, for their so called insignificance, are liable to suffer degradation not fit for human beings.” We need to compare these actions of Tagore with the contemporary RSS leaders who kept mum on this massacre, not only opposed the freedom struggle but joined hands with the Muslim League in dividing the joint freedom struggle on the basis of religion.

Batra led RSS outfit also wants removal of renowned Punjabi poet, Avtar Singh Pash’s poetry. The semi-illiterate (a status worst then being illiterate) Hindutva zealots of the Nyas want Pash’s poetry removed who was incidentally, one of the greatest Punjabi poets who wrote heart-touching poetry against those who were trying to divide Hindus and Sikhs in Punjab. He organized a literary-cum-political organization, ANTI-47 FRONT thus inviting the ire of some pro-Bhindranwale elements. He with his close friend, Hans Raj was shot dead on March 23, 1988 in Punjab.

The list of Hindutva demands for cuts is longish and described as preliminary only. Remove couplets of Ghalib (‘Hum ko malum hai jannat ki haqiqat lekin/dil ko khush rakhne ko Ghalib ye khyal achchha hai) who defied Islamic clergy throughout his life. Discard the biography of MF Husain whose sketches of Hindu gods/goddesses were once most popular and sought after in the calendar publishing industry of India because the “central government considered his activities a threat to the country’s unity and sovereignty”. Blackout references to some Mughal emperors as benevolent and reference to BJP as Hindutvadi party need to be removed.

Nyas also wants language cleansing. English words like vice-chancellor, worker, margin, business, backbone, stanza, royal academy must be dropped. Some of the Urdu/Persian/Arabic words to be removed are, poshaak (attire), taakat (power), ilaaka (territory), aksar (often), imaan (belief), mehman-navaazi(hospitality), sare-aam (openly).Interestingly, if it is the beginning of cleansing of the words from Urdu/Persian/Arabic languages then word Hindu also will have to be dropped. According to Swami Vivekananda, word Hindu was coined by the Persians. The RSS pracharaks seem to be beginning an era of language McCarthyism.

So if we find the Hindutva rulers facilitating the cleansing of minorities on the one hand, we find its ‘professors’ working overtime to turn school education into Daronacharya’s gurukul where only interests and ideas of high Castes would be served, Eklavyas having no place except when the latter cut-off their thumbs.

Shamsul Islam  is a retired Professor of University of Delhi.Email: notoinjustice@gmail.com