Gautam embraced Islam under the influence of his Muslim friends while pursuing higher studies (BSc and MSc Agriculture) in Nainital in 1984, said police.

An FIR has been lodged at the Gomtinagar police station Lucknow, which says that the clerics were involved in the conversion of deaf children and women to Islam and more than 1,000 people had been converted so far. 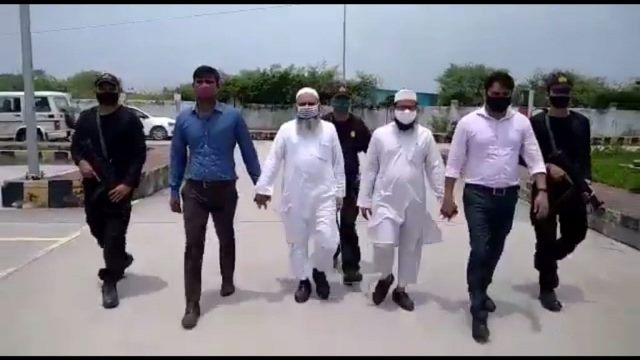 “Both were arrested after interrogation. We have got important evidence, documents of foreign funding,” Uttar Pradesh ADG (Law and order) Prashant Kumar said at a press conference.

“The deaf and dumb son of a couple living in Kalyanpur, Kanpur, was converted and sent to South India. Thousands of such cases have come to light. The people were promised money and jobs in lieu of conversion,” he told reporters.

Hailing from a Rajpoot family of Fatahpur in UP,  Shyam Pratap Singh Gautam (son of Dhanraj Singh Gautam) was born in 1964. He converted to Islam in 1984 and become Mohammad Umar Gautam. He was living in Batla House from three decades.

Mr Guatam came close to Islam when he was a graduate student at a college in Nanital district in Uttarakhand. He  was impressed with his Muslim neighbour, Nasir Khan, while living at a hostel in Nanital. Khan helped him a lot when Gautam met with an incident. The duo used to have dialogues on Islam. He also studied Quran and other books on Islam and finally decided to embrace the religion.

Hundreds of Muslims have been arrested under the anti-conversion law. Several of them have been accused of love jihad, which is a conspiracy theory alleging that Muslim youths are running a jihadist mission to convert Hindu women by marrying them.

Scores of human rights groups and civil society organisations have raised strong concerns against the aforementioned law enacted by the Uttar Pradesh government.

Shocking : No bail petition filed in Umar Gautam’s case even after five months of arrest !