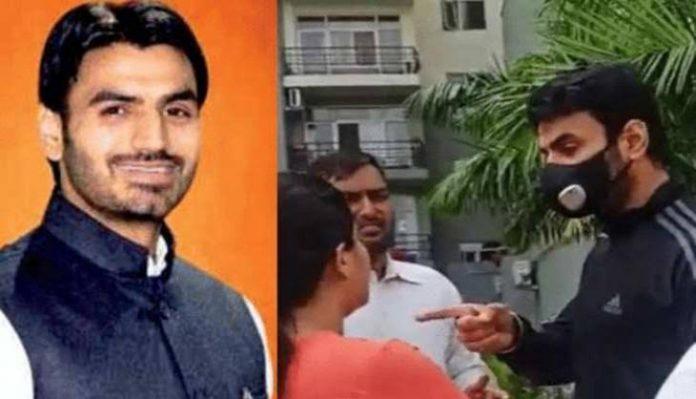 “Yes we have arrested him along with three other people,” the official confirmed to IANS.

Tyagi, who is accused of assaulting a woman here on August 5, was evading his arrest for past 4 days.

The politician, who according to residents of Grand Omaxe society, relates himself to the Bharatiya Janata party, was found involved in a verbal spat with a woman over the plantation of palm trees.

The matter came to light on Friday when several video clippings of the incident went viral on social media in which Tyagi could be heard hurling abuses at the woman. Social media users also shared the response of the victim woman in which she narrated the entire incident.

“I live in Grand Omaxe. A man, named Shrikant Tyagi, residing on the ground floor was encroaching the society by planting small and large plants in the common area. When I asked him to remove it, he refused and when I tried to remove them, he hurled abuses at me and my husband and kids, the woman said.

In the same video, the residents of the society could also be seen accusing Tyagi of encroaching the area by planting small and large plants.

Acting tough against Tyagi, the Noida Administration on Monday razed to the ground — the illegally constructed permanent structure — by the abusive ‘Neta’ in the common area of Grand Omaxe society.

Tyagi had encroached the common area of the society and constructed a wooden shed that had multiple pillars below it.

The demolition exercise was carried out by the Noida Authority. As the bulldozers rolled on Tyagi’s encroachment, the residents of the society expressed extreme happiness and also distributed sweets among themselves.

Later in the day, Additional Director General of UP police (law and order) Prashant Kumar informed that the Uttar Pradesh Police have suspended six police officials for their laxity in the present case.

“The in-charge of the local police station has been suspended. Besides him, a sub-inspector and four constables have also been suspended for laxity in work,” the senior official said.

Apart from the strict action against its own officials, Kumar said for the safety of the woman complainant, two personal security officers (PSOs) have been assigned to her.