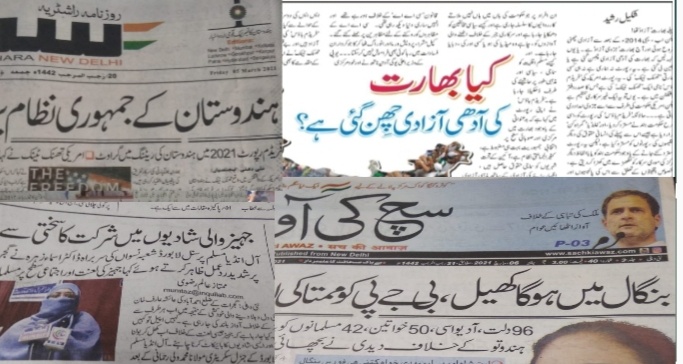 Apart from regular press releases and statements of community leaders and ulema, this week Urdu newspapers significantly captured the Delhi’s municipal bye-poll results, bail to Delhi riot accused and anti-Muslim law in France. However, Muslim drifting away from AAP – as reflected in results of municipal bye-polls – got wide coverage. The Hamara Samaj (March 4) carried important articles and reports giving views of community leaders on the issue. Hindustan Express simply reported the results, but the Sahafat editorial amply showed the mirror to the AAP, exposing its “commitment to secularism”. Siyasi Taqdeer (March 5) published lecture of noted aalim Sajjad Nomani on the way forward for Muslims in the country.

Dance of communalism in the runup to assembly polls

As assumed, top BJP leaders tirelessly engaged in ratchetting up communal passion in the runup to the assembly elections with a focus on West Bengal, Assam and Kerala – precisely due to sizeable Muslim population in three states, says SKW edit (March 6). On Uttar Pradesh chief minister Yogi Adityanath’s “brazen provocative speech” at Malda, the AEM titled its edit (February 4) “Ring-master returns after show”, implying that the saffron-clad short-heighted leader knows little about the Bengal culture of cohesiveness and communal harmony. The edit severely criticises Yogi for raking up ‘love jihad, cow slaughter and intruders’ issues, reminding him of the poor state of affairs in UP. Dr Manzoor Alam article in Inquilab (4 February) points out that the Bengal poll results will determine the BJP’s performance in subsequent assembly election in UP. He adds that the BJP trying to subvert democracy and called upon non-BJP political parties to put aside their electoral ambition and come together to protect India’s spirit.

Community leaders and ulema flooded newspapers with articles and opinions on dowry amidst flutter created by Aiyshas’ suicide video, suggesting all lofty ideas and ideals to put a curb on the social evil. Mostly, requested “strong intervention” of religious leaders to curb the evil. However, some papers also carried statements by religious leaders urging parents to distribute property to their daughters according to Islam, (ST & MW, 4 February). Besides editorials, top Muslim clerics issue statements even as some concerned groups call for the need to run a drive against dowry. Maulana Wali Rahmani, perhaps the first top ulema, issued the statement appealing to the religious bodies as well as Muslims to come together to root out the ill from Muslim society. He, however, warned media of giving religious colour to the incident, saying the evil is rampant across all sections of society. Dr Asma Zahara of All India Muslim Personal Law Board (AIMPLB) called for boycott marriages involving dowry (Inquilab, February 16). Some write-ups diagnosed the evil, which crept into the Muslim society from Hindu custom, in the current social set-up, and called for empowering girls.

The US-based Freedom House’s report downgrading India’s status from free to a partly free country for the first time drew a lot of concerns. According to the US-think tank, India scores 67 out of 100 countries. Referring to consistent decline over the last few years, mostly papers held the BJP and its ilk responsible for the “international shame”. Akthar Jamal Usmani (Inquilab, March 6) writes that the “majoritarianism is the biggest danger” for the idea of India. The media should be blamed for setting majoritarian discourse with complicity of the people in power. Still, the pathos of Muslim minority are even far greater than the report might have captured. The edit of Mumbai Urdu Times (March 6) refers to Rahul Gandhi’s “concern” that he raised recently, raising apprehension on the existential crisis of the very idea of India. Shakeel Rasheed on the same day (March 6) ran a full-page coverage, touching upon the repressive policies: arbitrary arrests of journalists and activists. The paper points out that people have almost lost hope in all the institutions, including judiciary, and government agencies.

Several international agencies over the past few years concluded India fared bad on democracy, human rights and freedom indicators. Some of the agencies report in 2020 alone present a grim picture:

India ranked 53rd in the 2020 Democracy Index’s global due to ‘democratic backsliding’ by authorities and ‘crackdowns’ on civil liberties, said The Economist Intelligence Unit (EIU).

Press freedom: India dropped two places on a global press freedom index to be ranked 142nd out of 180 countries. ‘The World Press Freedom Index 2020’ report released in April said the security situation for journalists in the country has increasingly been decreasing.

Various rights bodies, including the UNHRC, expressed concerned on human rights issues in India. CAA and anti-Muslim riots with police complicity highly are dangerous for the country, it said. It also raised concern on Kashmir situation after the withdrawal of Article 370.

***
The writer, a media analyst, can be reached at quamar.ashraf@gmail.comL