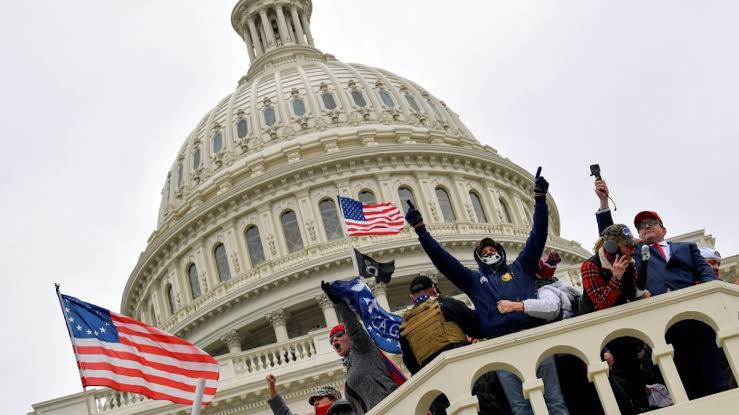 The US capitol violence came as a shock to many as the incumbent regime led by Donald Trump clashed at the US capitol with lawmakers and officials from the opposition party in an unprecedented move.

People all over the world were rattled at the developments in the land which is held as the epitome of liberal democracy and constitutional values.

Harrowing images from Washington flooded over social media and TV anchors showed people climbing up the wall to the US capital as the police looked helpless in front of the mob.

As the US appeared to be under siege by its own denizen, people across the globe found equivalence to the developments witnessed within their country. It was a déjà vu for India which likened it the Babri Masjid demolition that happened in 1992.

In a similar recall of events a violent mob had climbed atop the dome of the medieval building and demolished the mosque giving the radical right fundamentalists a space in the mainstream political discourse of the country.

But what failed to be established in the events happening on two poles of the globe is the response the two government. While the US media, along with the opposition and people at large condemned the violence calling out the impeachment of its president. Many encroachers were arrested, probes launched and even some party workers went to the extent of abandoning Republican president.

But in contrast to this, history tells us that the minority which have been in shock over the demolition, once again became victims of communal violence. Mainstream leaders endorsed the violence, some later became the heroes and went on to become leading force in the government.

The incident in the US was the illustration of white entitlement, not an offense against the minority. Had this been done by any racial or religious minority, the response would have been completely different, so had been the reaction of law enforcing agencies.

The Babri demolition is an example of cultural nihilism, a will to cross all the boundaries, that are not in the interest of constitutional morality or the general will. Here the disputed structure does not qualify the parameters of Hindutva so it was destined to be settled on the rubble.

Also both the incident attracted a different levels of media coverage and the most important thing is that majoritarian view on the events. While Trump getting permanently suspended from Twitter and Youtube was lauded as curtailment to hate speech, the same social media platforms give impunity to right wing trolls in India. To add, the perpetrators of Babri case has never been brought to justice.

Both the events prove that such painful chapters don’t bring an end to democracy. But, what remains is the larger public opinion: whether it rests upon deceit or moral values. In case of India, that threat not only remains, but it has solidified. While in US, there is a resolve to never let go the perpetrators free. Majoritarian approval of violence is the feature that distinct both the cradle of liberal democracy.

The writer is student of political science at Jamia Millia Islamia and writes on culture, gender and politics.