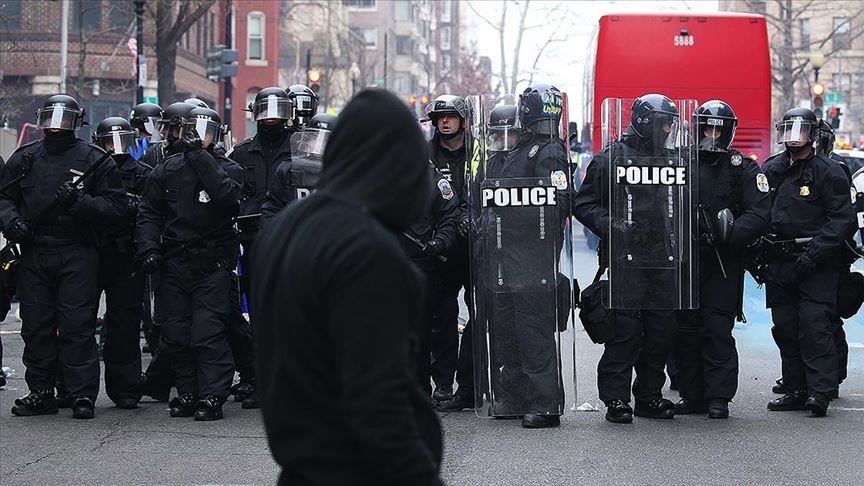 Convoy vehicles were thrown eggs, rocks as one Trump supporter laying on ground gets attacked with fists, kicks

Clashes have broken out between supporters and protesters of US President Donald Trump in Manhattan, New York on Sunday with at least 11 people getting arrested, according to local reports.

A group called “Jews For Trump” convoy covered with American flags and “Trump 2020” banners started to roll from Coney Island, Brooklyn to support the president days before the election next Tuesday.

When the convoy arrived the Trump Tower in Manhattan, it was greeted by the president’s lawyer Rudy Giuliani, who also had served as the 107th Mayor of New York City in 1994-2001.

The convoy, however, saw its path crossed with Trump protestors when it arrived Times Square in Manhattan.

As the two groups confronted each other, the vehicles in the convoy were thrown eggs when protesters tried to grab flags and exchanged words with Trump supporters, according to Twitter videos.

One Trump supporter wearing a “Keep America Great” red hoodie is seen in a video getting punched in the back of his head by a protester, who then immediately gets tackled by another supporter when trying to run away.

The man in the red hoodie, when later laying on the ground, is seen getting attacked by at least four people with fists and kicks.

While the convoy’s size increased to around 1,500 vehicles in the evening and was heading for a Trump rally in the Marine Park, Brooklyn, a person standing on an overpass is seen throwing rocks on convoy vehicles as they were driving under the overpass.

“NYPD Detectives are investigating this incident and looking for information in regard,” Terence Monahan, the chief of the New York Police Department (NYPD), wrote on Twitter.

“We are aware of this video and it is under investigation by our Brooklyn South Investigation Unit,” the NYPD said in a tweet.

Democratic nominee Joe Biden is overwhelmingly ahead, by 62.2% to 31.3%, against Trump in the state of New York, according to a poll analysis website, FiveThirtyEight, on Sunday.

Although Trump, as a former businessman, established strong ties with the Big Apple’s elite during his early years in the real estate sector, he lost the state to Democratic candidate Hillary Clinton in the 2016 election by receiving 36.5% of the votes against her 59%.

Since his inauguration, Trump has been the subject of wide protests in Manhattan as thousands gathered near the Trump Tower — the headquarters for the Trump Organization.

Afghan-Taliban and the Jewish question?