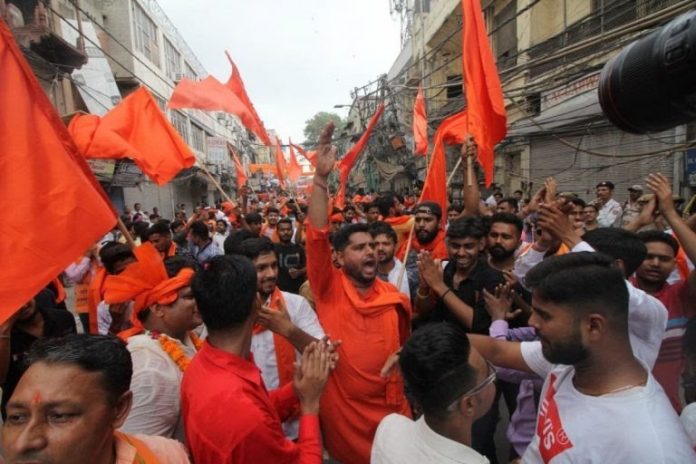 GANDHINAGAR : Vishwa Hindu Parishad leaders on Tuesday visited the Gujarat Assembly and met the Leader of Opposition Party (LOP), Sukhram Rathawa and most of the Congress legislators present in the LOP office. They requested the opposition legislators to stand for certain demands the VHP had been raising all across the nation.

The VHP leaders claimed that they regularly meet the elected representatives, including members of parliament and the assembly to put up a side of Hindus in the concerned houses.

The VHP leaders of all states had met all the MPs in the country in December 2021 and requested several issues to be taken care of. According to Ashok Rawal, regional secretary, VHP Gujarat, the VHP demanded a strict law to prevent religious conversion.

“Raise a voice in Lok Sabha for the safety and security of Hindus of Pakistan and Bangladesh, so that the Indian government creates diplomatic pressure on these countries. If any tribal converts to Christianity or Islam then their reservation right must be stopped immediately. There are several issues which need to be raised at the state assembly level,” said Rawal.

The VHP leader said the Hindus need protection and justice on issues like Gauraksha.

“Many Gaushalas (cattle shelters) are being run by Trusts or donations and a significant amount is needed for their maintenance. The government or the Gauseva Aayog should pay 50% of their maintenance bills,” said Kirti Mehta, special relations president, VHP Gujarat.

Another demand put forward by the Sangh outfit was that religious institutions should be given relief in tax and be exempted from commercial tax.

The VHP leaders said that religious institutions should be provided security. “Give remuneration to Pujaris of Ramji, Krishna and any other Hindu temple in each village. All the revenue related issues at the revenue or charity office must be cleared immediately,” added Rawal.