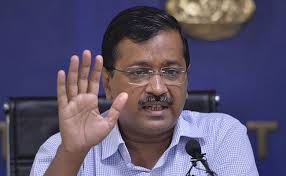 New Delhi: Delhi Chief Minister Arvind Kejriwal here on Monday claimed that his government had ended the politics on unauthorised colonies by working for the welfare of these colonies” residents.

“Our government is the only government to have worked for the welfare of the unauthorised colonies,” Kejriwal said.

Other parties, the Congress and the Bharatiya Janata Party (BJP) just demanded votes on the name of unauthorised colonies, he added.

Addressing the Delhi Assembly, Kejriwal demanded registration of properties of the unauthorised colonies in Delhi.

Participating in a discussion on a resolution on the unauthorised colonies, Kejriwal said, “we are working to transform these colonies so much that they (BJP) were forced to take steps for regularisation. We ended the politics over these colonies and forced them to work.”

Countering him, Leader of Opposition Vijender Gupta said the Centre had to come into picture as the Kejriwal government could not do anything in the last five years for these colonies.

“The Centre doesn”t have any role in regulating the colonies. It came into picture after the Kejriwal government failed to do anything in the last five years. The DDA and the Centre are working to regularise these colonies not Kejriwal,” Gupta said.

He tore the copy of the resolution, calling it a bundle of lies. “We can see your frustration as the Centre has ensured living rights to the people. The Centre trusted the DDA and it has done the job in such less time,” Gupta said.

However, Kejriwal said his government spent Rs 8,147 crore on developing unauthorised colonies. “The Congress and the BJP were fooling the people for many years. We have forced them to take action. They didn”t give water or sewerlines or roads to these colonies. We came to power in 2015, and transformed the city”s unauthorised colonies.”

He slammed Gupta saying the BJP too was doing what Shiela Dikshit had done. “We won”t trust you untill the registry is given to people.”