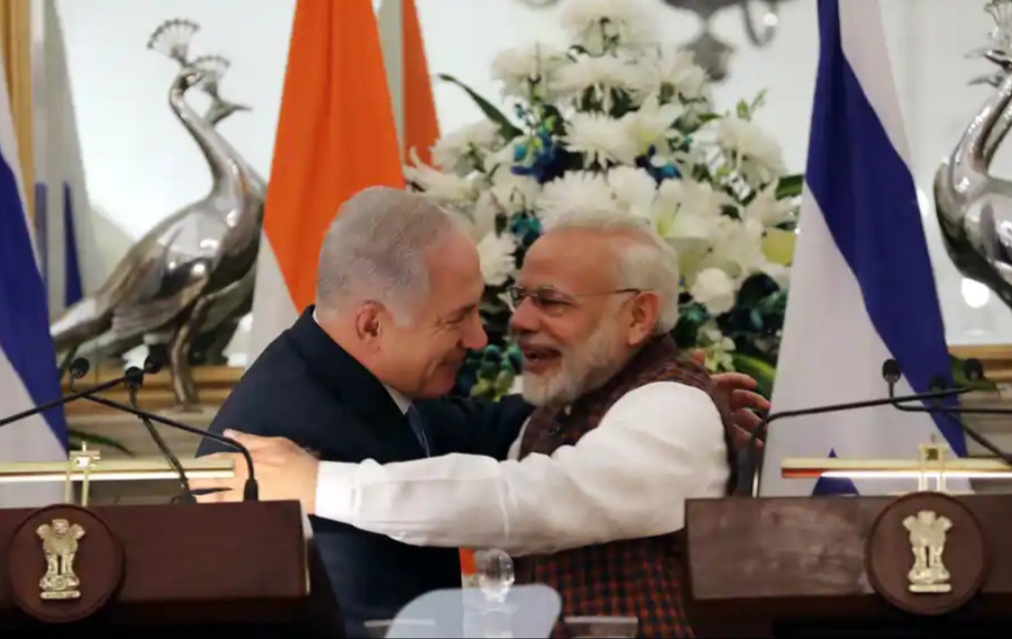 India’s Hindu Nationalist have a huge admiration for Israel. Last Month of May when Israeli forces brutally led the crackdown in AL Aqsa Mosque compound Islam’s third holiest site , followers of Hindutva Including the members of ruling BJP in India has enthusiastically supported the Israel on Social Media by trending # tags such as #IndiaStandsWithIsrael #IStandWithIsrael #israeliLivesMatter. Tejasvi Surya a BJP parliamentarian known for his anti-Muslim rhetoric, wrote on twitter: “We are with you. Stay strong, Israel.”

The Idolization of Zionism by the Followers of the Hindutva is deep rooted in its Political ideology laced with supremacism, exclusivism and most importantly anti-Muslim hatred. Both Hindutva and Zionism espouse Ethnic Nationalism which aims to define citizenship and belonging in the procrustean terms of ancient past ,culture and race with having a “holy” geographical entity. The idea of “Akhand Bharat” is similar to the idea of “Greater Israel” propounded by Theodor Herzel. Based on religious identity, both require the cleansing of Muslims to reach their desired utopia.

The Zionist concept of nation had been also encapsulated in the political philosophy of Hindutva. Much before the creation of Israel ,Savarkar a staunch ideologue of Hindutva in his book Hindutva concluded that a common nation (rashtra), a common race (jati) and a common culture or civilization (sanskriti) were the three essential element of Hindutva.He also examined the origin of the words ‘India’ and ‘Hindu’, and declared that ‘Indian’ means ‘Hindu’. Muslims and Christians, by virtue of being non-Hindus, cannot, as per his definition, be authentic Indian. He was the first Hindutva ideologue who explicitly supported Zionist movement and wrote in his book Hindutva : “… no people in the world can more justly claim to get recognized as a racial unit than the Hindus and perhaps the Jews and in same book he further wrote “Look at the Jews; neither centuries of prosperity nor sense of gratitude for the shelter they found, can make them more attached or even equally attached to the several countries they inhabit. Their love is, and must necessarily be divided between the land of their birth and the land of their Prophets. If the Zionists’ dreams are ever realized – if Palestine becomes a Jewish State and it will gladden us almost as much as our Jewish friends – they, like the Mohammedans, would naturally set the interests of their Holy land above those of their Motherland in America and Europe…”

The common force uniting Hindutva and Zionism is their shared understanding of the nation and the treatment of minorities While Zionism sought to violently exclude the Palestinian, Hindutva proposed to reduce the Muslim in a subordinated position to the Hindu polity. Both aims to reclaim the imagined lost civilization by cleansing of the people which it considered as impure and invader.
Writing in the 1939 text We or Our Nationhood Defined, Golwalkar stated:

“India is therefore pre-eminently a Hindu nation, Hindusthan… the non-Hindu people in Hindusthan must either adopt the Hindu culture and language… must cease to be foreigners or may stay in the country wholly subordinated to the Hindu nation, claiming nothing… not even the citizen’s rights. ”He too, borrow his political thought heavily from Zionist and Judaic exhortations and blamed “intrusion of Islam” for the loss of Jewish culture and traditions in Palestine and held that the Jews had “maintained their race, religion, culture and language” in exile and all that was needed to complete their “nationality” was a “natural territory”.

Land has become central focus in the politics of Hindutva and Zionism which is clearly visible from the brutal occupation Of Palestine and Kashmir. Jewish settlement model in Palestine has amplified the imagination of Hindutva Fanatic which is why the BJP-led Union government is emulating Israeli methods in Kashmir. Government has tremendously changed the character of land Acquisition policy and the nature of property ownership since the abrogation and the removal of Article 370 and 35 which will eventually dilute the concentration of Muslim population in the region and makes easier for outsider to purchase the land in Kashmir. The enforced demographic change in kashmir is a replication of Israel’s settler-colonial policies in the occupied West Bank, where majoritarian forces have built illegal colonies and commercial spaces, with having heavy military presence to carry out change in the socio- political landscape in larger ideological framework of ‘Akhand Bharat’

The ultimate aim of Ruling BJP and its parent organization RSS is to transform the India into an ethno-religious state according special rights and privileges to Hindus within a multi-tier system of citizenship. The model state that they aspire to replicate is Israel. In line with their ideological affinity to Zionism, the BJP Passed discrimantory Citizenship Amendment Act in 2019 to institute a policy similar to Israel’s Law of Return, which would grant Indian citizenship to Hindus from neighboring countries depriving Muslims for same and with proposed Countrywide NRC proof of belonging to India now lies on the shoulder of Muslims.

According to late Palestinian academic Edward “Zionism initially portrayed itself as a movement bringing civilization to a barbaric and/or empty locale. The Arabs were seen as synonymous with everything degraded, fearsome, irrational, and brutal…” Hence while the Law of Return permits Jews to ‘return’ to Israel, no similar right is afforded to the millions of displaced Palestinians. By making religion a main criteria of Indian citizenship, the CAA has a devastating purpose: of Israelizing the India

The follower of Hindutva revered Israel like a lodestar for its ability in humiliating and defeating the Muslims. The parallel universe of both the ideologies justifies brutal Military occupation, Settler colonialism and Apartheid and are deeply convergent with each other in their structural framework ,ideas and in course of action.