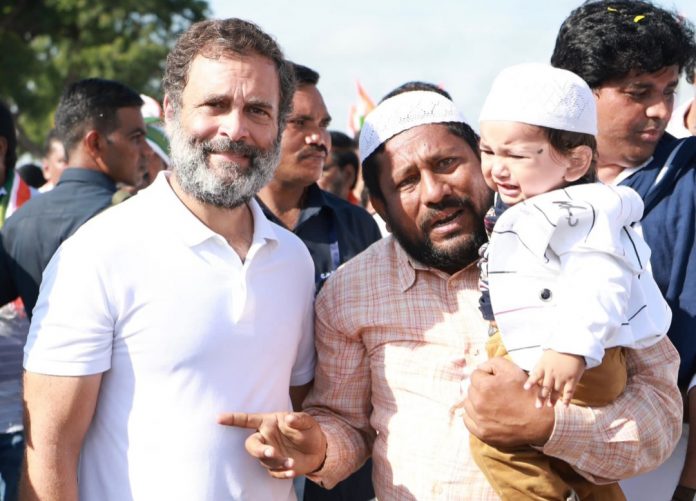 The Bharat Jodo Yatra (BJY), which is being led by former Congress President and MP Rahul Gandhi, has inspired congress workers, but it remains to be seen if it will be able to stop the country’s fast sliding  into a cesspool of hatred given that its major goal is to unite the people and to end  animosity from society sowed by the ruling party for its political consolidation.

‘Bharat Jodo, Nafrat Chhodo’ this catchphrase was echoing as this scribe travelled along with the yatra at many places. Rahul Gandhi has been all along emphasizing that the yatra’s one of the main objectives is to stamp out hatred from the society which has been allegedly pumped up by the ruling party and its cohorts.  Divisive politics has become an easy route for attaining power and diverting public attention from failures and real issues. During the yatra, one can hear the cheerful shout of “Jodo! Jodo! Bharat Jodo!” , “Nafrat Chhodo, Bharat Jodo!” There is also a soundtrack blaring en-route of  yatra.

The fear of unemployment is increasing and only the BJP and the RSS benefit from this fear because they convert this fear into hatred. Their entire organisations do the same work.. They work to divide the country, and spread hatred and fear. That is why the most important goal of Bharat Jodo Yatra is to stand against the fear and hatred being spread in the country,” as  Rahul Gandhi outlined the purpose of the yatra.

In his public speeches during the yatra, Rahul Gandhi talks on venom of hatred spreading in the society. He does not mince words in denouncing RSS-BJP for this.  He also interacts with common people to know their sufferings as hundreds of villagers line the road. At Red Fort speech on December 24, Rahul Gandhi said, “Religious differences used as weapons, spread 24X7 on TV to divert public attention from real issues. This Yatra is like our India, no hatred, no violence.”

On the completion of 100 days of ‘Bharat Jodo Yatra’, Rahul Gandhi also addressed the media in Jaipur on December 16.  Where he emphasized that it is imperative that we work to bring India together and reject the kind of polarising, aggressive, and fear-based politics practised by the BJP and RSS.

In response to a question that can define what Rahul Gandhi believes is the success of yatra, Gandhi quipped, “Look! There is a particular vision of this country that the RSS and the BJP propose. There is a particular path that they believe this country should take. It is a violent path. It is a hate-filled path. It is a path that is designed to create two Indians. One is, India, where there are 5 or 6, 10 billionaires and the other India, where everybody else will live in poverty, in desperation, that’s their vision and you cannot drive a car with mirror vision”.

The country has received this message quite warmly. This message has received an overwhelmingly positive response. These people want to hear that there is an alternative political strategy, such as Gandhiji’s or the Congress’s, he added.

Addressing a press conference on New Year eve in Delhi which was his ninth presser during the yatra, Rahul Gandhi again hit out at the BJP and its parent body, the RSS, over their divisive politics and poor governance. Interacting with media persons at the party headquarters on December 31, the former congress president warned that “destroying Indian values” and making “Indians fight with one another, hatred” was being watched by other countries who try to benefit from it

“My focus is on the idea that India should be united, that we fight hatred and anger with affection, love and harmony and we are providing an alternative vision of this country. So, I think that’s what I would like to focus on. These questions, of course, you have to keep saying them, because this is the nature of the media. So, I am going to let you keep doing that, you can enjoy yourself doing it. Now, also have a little fun while you do it.

Because there are something very powerful called Indian values, Indian philosophies, India’s thinking and that’s actually our strength, and we are destroying it. So, when we make one Indian fight with another, when we are not harmonious, when a foreigner comes to India and he feels terrified that something might happen to him, we are attacking our own system”.

In a tweet, Gandhi categorically stated that “It is not Narendra Modi’s government. It is Ambani and Adani government. Hindu-Muslim is being done to divert attention from the real issues. Today degree holder youths are selling ‘pakoras’:

Notwithstanding the indifference of the monopolized Upper caste-dominated mainstream media; the yatra is creating a stir and drawing crowds including prominent citizens of all walks of life. The 3,570 km long Yatra originated from Kanyakumari on September 7 which so far travelled nine states and will culminate in Srinagar.

A cross-section of society has participated in it, including stars from the cinema and television industries like Pooja Bhatt, Riya Sen, Sushant Singh, Swara Bhasker, Rashami Desai, Akanksha Puri, and Amol Palekar.

Along with participation from well-known figures from the entertainment industry, writers, veterans of the military, such as former Navy Chief Admiral L. Ramdas, opposition leaders like Aaditya Thackeray of the Shiv Sena and Supriya Sule of the NCP, as well as former RBI governor Raghuram Rajan,   Prof Yogendra Yadav, advocate Prashant Bhushan have all taken part in the march at various points.

This correspondent too interacted with many participants who joined from different parts of the country. They said they were perturbed by the BJP’s reliance on hate politics which will ruin the fabric of the country. One participant Ashok from Himachal Pradesh said it should be a matter of concern for every countryman.  A youth Shankar from Allahabad said there should be an end to Hindu-Muslim politics as youths are now fed up with this brand of politics who want jobs and employment.

Notwithstanding the electoral dividends, will it make a positive impact on society? Will it succeed in changing the course of hatred-based politics? This is the moot question that begged answers.

China, Pakistan have come together against India: Rahul Gandhi