It took about a month to ‘come out’ as to what had been the pivotal purpose of Chief of Defence Staff Anil Chauhan ‘integration meeting’ of all the Chiefs of the Indian army, on October 21, at Khadakwasla, Pune,  as the Army Chief, General Manoj Pande, the Navy chief, Admiral R. Hari Kumar and the Air Force chief, Air Chief Marshal V.R. Chaudhuri were present. General Anil Chauhan was appointed in September after the death of the first CDS Bipin Rawat in a helicopter crash in December 2021. It has come to the fore that the meeting was to prepare for the coming war in three months?.

It has been reported by The Hindustan Times 1 on November 22 that the crux of the meeting was to give a three months period to build a consensus and iron out inter-service differences, as the primary objective is to make three theatre commands and CDS wanted the three chiefs to streamline their perspectives owing to a war threat particularly from China and not so probably from Pakistan. The CDS gave a clear message that the three-commands are the immediate need of the hour and therefore the work on it has also begun. CDS had to kick start the programme as China already has five-such theater commands.

The strong message from CDS ‘had to come’ owing to the Russian-Ukraine war.  India has every reason to ‘take-lessons’ from it, specifically in context to the massive use of drones to decimate the foe.  Indian Air Force, did have legitimate concerns into splitting itself into three commands, but since India now is abreast with Israeli Iron Dome technology and also the coveted Russia S-400 Defense System, there is a new wave-of confidence inside the Air Force, through which India is now capable to face the projected two-front war with China and Pakistan. The ‘beginning of the work’ shows the consensuses have been arrived. India will now be able to answer with a rapid co-ordinated military response in case of any military adventurism from both China and Pakistan. The military theater commander will have all the three i.e. ground, sea and air assets under his thumb, for the quickest decisions to be communicated to the respective troops. India has a 3488 kms border which gets monitored by the Chinese Western Theater Command. China is locked with India on many points of ‘border-disputes’ with India.

India has very successfully cornered Pakistan, over the years, which despite its internal turmoil had been reeling under the grey-list of FATF too, but now has been cleared into its white-list on October 22, which prompted India to convene a two-day conference meeting of ‘No Money For Terror’ on November 17, attended by 78 countries, in which Pakistan was not invited but China did not attend despite the invitation. The meeting was addressed by Prime Minister Narendra Modi, Home Minister Amit Shah and Defence Minister Rajnath Singh, as India mooted a ‘permanent secretariat’ to fight terror on November 20, cited The India Express 2 . To keep on with the tempo, Rajnath Singh described transnational and cross-border terrorism ( read from Pakistan) as the ‘gravest threat’ that the world is facing and called for urgent and resolute intervention by the international community a the 9th ASEAN Defence Ministers Meeting at Siem Reap, Cambodia, on November 23, as per PIB 3 . India’s effort to isolate Pakistan is in full gear.

What needs a mention here is that the entire politics on the region of Jammu-Kashmir and Ladakh, had to change dramatically as soon after Narendra Modi was sworn to office, in May 2019, on August 5, the same year, JK&L Special Status accorded under Article 370 of Constitution of India, was annulled and by January 2020, the then Army Chief NM Naravane had announced, “If the Parliament wants it, then Pakistan Occupied Kashmir (PoK) also should belong to us. When we get orders to that effect, we will take appropriate action. Army should get the mandate to do so, “referred The Week 4. The same statement had led to China and India get engaged into a conflict at Galwan valley, in Ladakh,  on June 20, 2020 in which 20 Indian and four Chinese soldiers were killed.  China is in dispute with India over the territory of Ladakh. No wonder, this also made China and Pakistan go to UNSC for twice by August 2020, against India, reported The Wire 5. 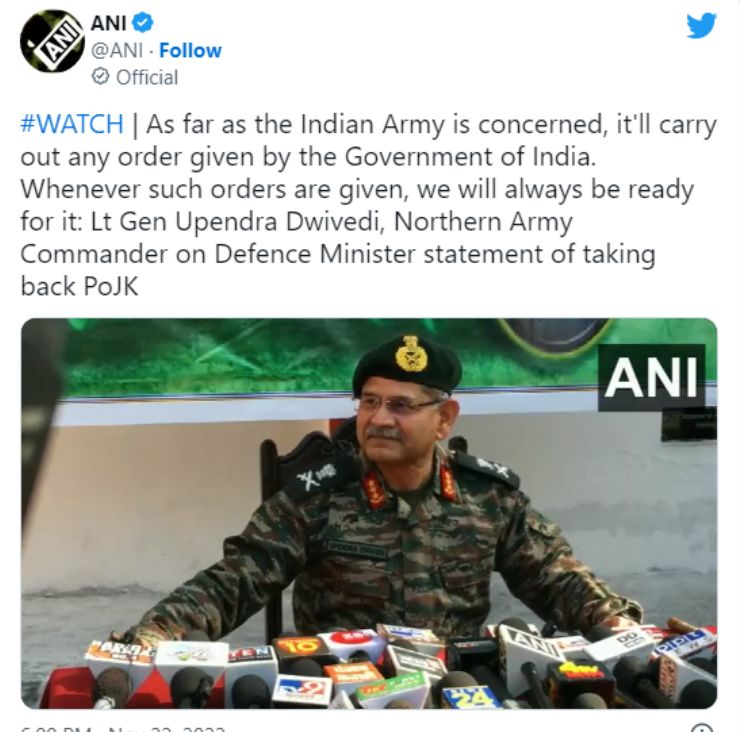 Now, after three years of new changes in the overall geo-political situation, the Indian Army Northern Commander Upendra Diwedi 6 has issued a stern warning to Pakistan, which is a clear signal that India has rightfully prepared to take-on Pakistan over Gilgit-Baltistan ( parts of Pakistan occupied Kashmir) , from where the most ambitious China-Pakistan Economic Corridor passes, and towards which India and US had long cast their reservations. This statement is surely embedded in the challenge which Rajnath Singh had thrown to Pakistan, on the occasion of Shaurya-Diwas, i.e. October 27, that India would take back POK, which Pakistan has been occupying since decades, and that the ‘overall development of JK&L will be achieved only after reaching Gilgit-Baltistan’, told reported India Today 7.

Will India go ahead with its intentions while the war between Russia and Ukraine is still raging? A war between China and US over Taiwan is also looming? Moreover reports of a war between Iran and Israel with US support are also rife. North Korea (with China’s support) is already threatening US with long range missiles, are the questions which the world is languishing with. India plunging into a war at such a precarious situation, will therefore, be the boldest step, in the history of independent India, but may be PM Modi wants to go to polls of 2024 with a PoK trophy.