Home Indian Muslim Will sue BJP if it does not tender public apology for calling...
Facebook
Twitter
WhatsApp
Email
Telegram 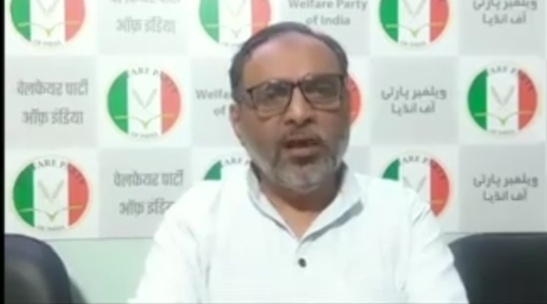 New Delhi:  Taking strong objection to the Union Minority Affairs Minister, Mukhtar Abbas Naqvi’s attempt to malign the image of  Muslim organizations, Welfare Party of India on Monday demanded an immediate public apology from BJP and the minister. It said this shows the desperation of the BJP because it is losing the battle in Bihar assembly elections.

Party president, Dr SQR Ilyas has strongly criticised Naqvi for calling Muslim organization as “radical and terrorist”.  He said the allegations made by him are baseless and aimed at maligning the image of Welfare Party of India which is a value based secular political party, independent of any affiliations and registered with Election Commission of India.

Naqvi, while addressing media persons at BJP headquarters here  on Sunday, accused the Congress of allying with “radical organisations like Jamaat-e-Islami and Popular Front of India (PFI)” in poll-bound Bihar and sought to know if RJD leader Tejashwi Yadav and his party are also part of such “an understanding”. He went even further by saying “For the convenience of the Congress, Jamaat-e-Islami has formed a political party, probably named it Welfare Party.”

However, the minister, who is used by his party as ‘Muslim face’, seems to forget that both the organizations (Jamaat Islami and PFI) are non-political.

Dr Ilyas told Muslim Mirror that Naqvi shows the desperation and frustration of BJP party as it is losing its hold in Bihar state which is going to polls.

This is their (BJP) tested ploy and strategy to divert, distract and polarise the voters and added that the people will reject it as they are tired of their fake tactics and slogans,” said Dr Ilyas.

As media reports suggest that BJP-led ruling NDA is facing intense anti-incumbency wave in the ensuing Bihar assembly elections which will take place in three phases.   And the RJD-led Grand Alliance is drawing huge crowds in their election rallies that have unnerved the BJP leadership and JD (U) leader and incumbent chief Minister Nitish Kumar who is seeking a fourth term in office.

Continuing his attack on the BJP, Dr Ilyas said it is the desperation of BJP which fielded ‘ a Muslim face’ to defame Muslim organization in order to polarize the voters  on the communal lines.

He asserted that  WPI is a ‘value based secular’ political party which is striving to politically empower all marginalized sections of the society and has always taken up issues concerning the people and as a political party it has all rights to support, make alliances or share seats with any political parties.

He also advised the BJP that it should learn to play fair and give space to other political parties in level playing and doing alliance politics in the first past the post system adopted in our country the largest democracy in the world.

Dr Ilyas demanded that Mr Naqvi should publicly apologise for calling WPI, a terrorist and radical organization and the political arm of Jamaat Islami. He also threatened to take legal course if the minister does not tender an unqualified apology for his diatribe.