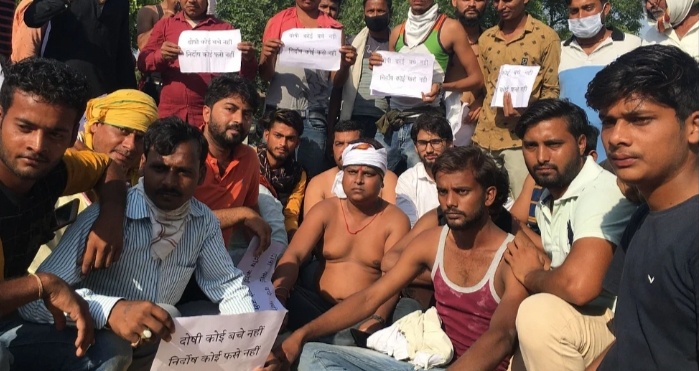 HATHRAS — As days roll by, the narrative in the ‘horrific’ Hathras incident has started changing and accused are now getting increasing support from BJP leaders.

The revelation of call detail records (CDR) of victim’s family that show that they had spoken 104 times in five months to the main accused, Sandeep Singh, has given a new angle the case.

Police sources said that the CDR proves that both the families were on good terms.

Call records show that 62 calls outgoing and 42 incoming calls totalling 104 — were made between the two phone numbers.

According to the police, the call records show that the victim and the main accused were in touch.

“The victim’s family has concealed this information from us all along. The matter will have to be investigated and we will be interrogating the girl’s brothers on this issue,” said a senior police officer on condition of anonymity.

The girl’s brother admits that the number belongs to him but vehemently denies having spoken to any member of the accused family.

The victim’s family’s refusal to undergo a narco-test has also put them under the cloud of suspicion.

Thakur Somesh Singh, a local resident, said, “It is a case of honour killing. The government has confirmed that there was no rape. Medical reports also have found that rape did not take place. So why would some other boys strangulate her.”

Rakesh Kumar, father of accused Ram Kumar, said that at the time of the alleged incident, his son was on duty at a local milk plant where he works.

“You can check CCTV footage and also the attendance register to confirm his presence at the milk plant,” he said.

Guddu, father of the accused Sandeep said that his son was giving water to their cows when some people came and said that the girl was lying unconscious. We even gave them water and a few hours later, my son was picked up by the police,” he said.

Munni Devi, mother of another accused Luvkush, said that she was working in a nearby field when there was some commotion. “I went across and saw the girl lying unconscious. I gave her water but later my son was taken away the police,” she said.

Upper caste panchayats are now being held in several villages around the Bulghari village where the incident took place and the local Thakurs and Brahmins are unanimously demanding the release of the four accused.

The government affidavit submitted in the Supreme Court on Tuesday which rules out rape, has further strengthened the campaign in favour of the accused.

The Hathras incident took place on September 14, when the victim was working in a field and was allegedly dragged by the accused to a nearby field and assaulted. The family has alleged she was gang raped and strangulated.

She was admitted to a hospital in Aligarh with serious injuries on neck bones and spinal cord. She was later shifted to a Delhi hospital where she died on September 29 evoking outrage throughout the country.

The voices seeking justice for the victim got louder after the Uttar Pradesh Police cremated the body of the victim in the dead of the night. The family said the police did not take their consent before cremating the body.

Claims of Rs 100 crore pumped in by PFI for Hathras protest is false, says ED