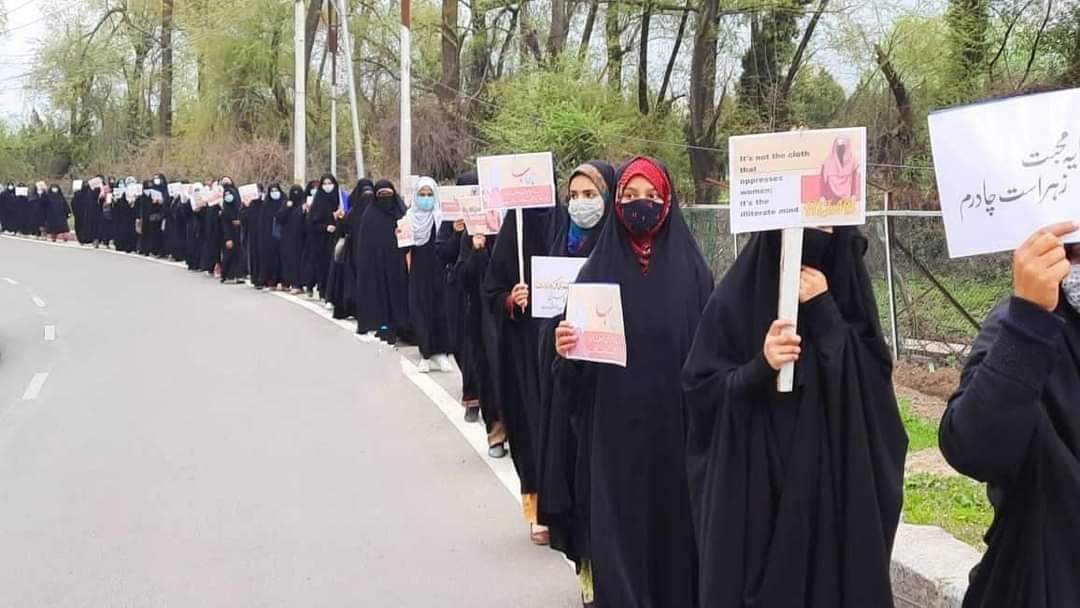 A group of women held a protest march in the capital of Indian-administered Jammu and Kashmir on Sunday against a fashion show that was organized recently and featured Kashmiri girls as models.

The hijab-clad protesters held placards and walked silently along the Boulevard Road in Srinagar, which runs along the famous Dal Lake and is frequented by tourists. A government-owned convocation center, where the fashion show took place, is situated along the road on the banks of the lake.

The placards urged women to wear the head covering, and carried messages such as, “It is not the cloth that suppresses women; it is the illiterate mind.”

Tahira Manzoor, a protester, told Anadolu Agency that dozens of like-minded women who were not representing any organization assembled to protest against the fashion show she said was a first step toward pushing Kashmiri women into “an abyss of immorality.”

“We don’t know who is organizing these shows but in the name of fashion obscenity is being promoted,” she said. “Today, our girls show bare arms. Tomorrow, they would be pushed into flesh trade. Already thousands of our youth are being consumed by drug abuse.”

Another protester, who requested anonymity, said shows like these have “state patronage” and are “aimed at presenting a rosy picture of a place where 12 militants were killed in the past 72 hours.”

Public protests have become rare since Aug. 5, 2019 when India scrapped autonomy of the erstwhile state of Jammu and Kashmir after imposing a military and communications lockdown.

Since then, New Delhi has led several delegations of foreign envoys to guided tours of the disputed region in a bid to demonstrate that people are happy with the decision.

The state has drawn flak from various quarters for promoting tourism, musical shows and other activities that strengthen the normalcy narrative amid rising concerns over the spread of COVID-19.

Kashmir is held by India and Pakistan in parts, but claimed by both in full. A small sliver of the region is also controlled by China.

Some Kashmiri groups have been fighting against Indian rule for independence, or unification with neighboring Pakistan.

According to several human rights organizations, thousands of people have been killed and tortured in the conflict since 1989.