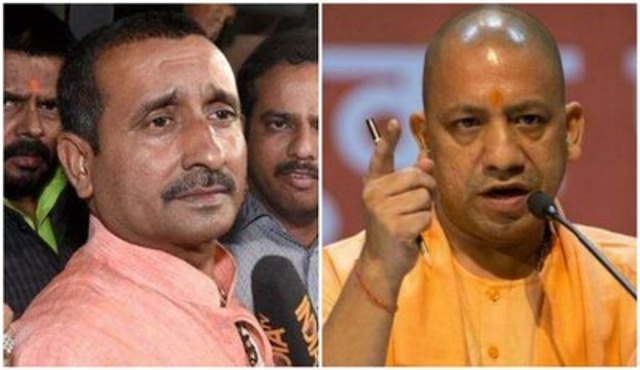 The Uttar Pradesh government has promoted a bureaucrat and three police officers despite the fact that the Central Investigation Bureau (CBI) has sought action against them for not taking adequate measures against former BJP politician Kuldeep Sengar, who is currently serving a life sentence for kidnapping and raping a minor girl, an exclusive news report by Newslaundry revealed.

However, all of them now hold higher ranks than they did in the past.

On September 29, the day the Dalit girl brutalised by four upper-caste Thakur men in Hathras died, Amar Ujala and Patrika reported that the Adityanth government had given a clean chit to Aditi Singh. It said the CBI’s report against Singh was “baseless” and “false” since the victim had never gone to her with a complaint.

Pandey was the superintendent of police in Unnao between February 2, 2016 and October 26, 2017. The victim was raped by Sengar and his associates in June 2017. Her failed attempts to file a case against the former BJP MLA also took place during Pandey’s tenure. In December 2017, Pandey was appointed an assistant director in the Intelligence Bureau in New Delhi.

Devi succeeded Pandey in Unnao. She was the superintendent of police from October 27, 2017 to April 30, 2018. She was transferred out of Unnao soon after the rape case gained nationwide attention. Devi was elevated to the rank of deputy inspector general in January this year. On September 8, three weeks after the CBI letter to the state government, she was posted as the DIG of Railway Police in Lucknow.

Ashtbhuja Singh’s profile is no different. He was Unnao’s additional superintendent of police when the minor was raped. He is now the commandant of a PAC (Provincial Armed Constabulary) battalion in the state’s Fatehpur city. He was recruited in the State Police Service in 1999, and promoted to the IPS cadre in 2019.

The CBI had found, the Wire reported in early September, that “the survivor, her mother, sister and deceased father had made fervent appeals to DM Aditi Singh as well as the two successive SPs, Neha Pandey and Pushpanjali Devi, seeking justice. All three had attempted instead to dilute the case against Sengar who had initially simply been booked for ‘kidnapping’.”