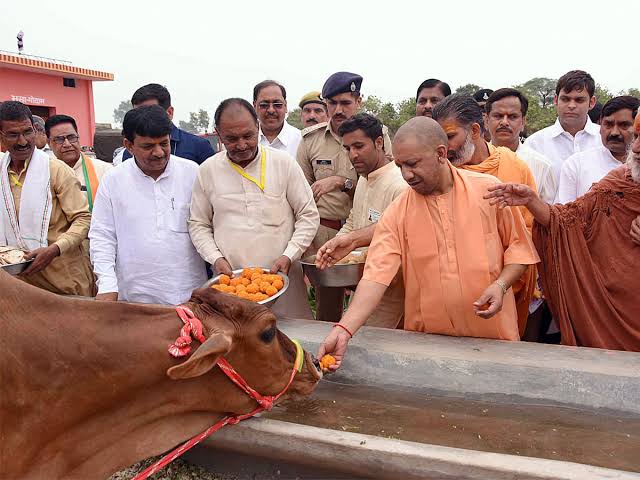 Lucknow: Uttar Pradesh Chief Minister Yogi Adityanath has come up with a new scheme for the welfare of stray cattle that will also help generate employment opportunities.

In Phase 1 of this scheme, the government will hand over one lakh cattle, currently in the government-run shelters, to farmers and other people ready to take care of them after the due process.

The person, who takes the cattle, will be paid Rs 30 per animal per day, every month via direct bank transfer, which works out to be about Rs 900 per month.

In a press release, the UP government acknowledged that keeping stray cattle in the government-run shelters is proving to be a major problem in terms of the upkeep as well as the care of the cattle.

The government said there are 205.66 lakh cattle in the state as per the 2012 census of which there are 10-12 lakh stray cattle in UP presently.

There are 523 registered ‘gaushalas’ or cow shelters in the state and more are being built.
This new scheme will cost the government Rs 109 crore in the first phase.

The government has claimed that the scheme will lead to the eradication of the stray cattle problem and increase employment opportunities.

In the 2019-20 budget, the state government allocated an unprecedented Rs 600 crore for cattle welfare as opposed to the Rs 500 crore earmarked for improving the infrastructure of the primary and higher primary schools.

This includes Rs 250 crore for the construction and upkeep of cattle shelters in rural areas, besides an additional Rs 200 crore for the same work in urban regions. Liquor cess is also expected to generate an additional revenue of Rs 165 crore which will help to feed the bovines.

That the cow shelters are still lacking in facilities, is evident from the fact that dozens of cows have died in cow shelters due to lightning and rains in the past few weeks, sparking public outrage.

So far the state government has suspended eight officials for negligence in duty and warnings to others have been issued across the state.