Guwahati : As per Union Home Ministry’s own admission 28 people have died in Assam’s detention centres for “unauthorised immigrants” in the last three years.

Twenty-eight people have died in the detention centres in Assam from the beginning of 2016 till October 10 last, Minister of State for Home Nityanand Rai told the Rajya Sabha on Wednesday.

None of them died due to “apprehension or fear.” “They died due to various illness,” he said.

Ironically, the Assam government is preparing to construct ten more detention centres in anticipation of the possible requirement to house large number of ‘illegal foreigners’.

Assam, which has struggled with an immigration problem for almost four decades, sends people it deems illegal migrants to detention centres. These centres have been criticised for violating human rights and forcing people to live in inhuman conditions.

According to the Citizens for Justice and Peace (CJP), a human rights group, about 100 people have died because of various reasons. Some died in detention centres, others committed suicide. CJP has been tracking these deaths since 2011.

Rights activists have also criticised the government and alleged that the basic human rights of the people held in these camps have been violated.

In January 2019, the central government issued a circular to all the states and Union Territories, carrying with it a manual on Model Detention Centre/Holding Centre. The manual has not been made public yet.

In response to the question raised by Opposition MPs, the home ministry said the manual prescribed the amenities in consonance with human dignity, and these included electricity with generator, drinking water, hygiene facility, accommodation with beds, sufficient toilets/baths with provisions of running water, communication and medical facilities, provisions for kitchen and recreational facilities. 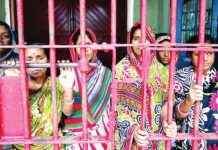