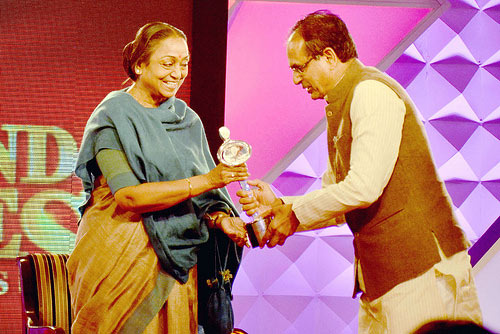 Bhopal: The Bharatiya Janata Party, (BJP), ruled Madhya Pradesh has been honoured with “Fast emerging state in category of big states” award. Instituted by IBN-7, the award was given away at “Diamond State Award” function in New Delhi by Lok Sabha Speaker Mrs. Meira Kumar on Saturday. The Chief Minister Mr. Shivraj Singh Chouhan received the award on behalf of the state, an official spokesman said.

Chief Minister Mr. Shivraj Singh Chouhan reportedly said that this is a major achievement for Madhya Pradesh as it was once considered as backward. State’s growth rate now stands at 12 per cent and agriculture growth rate 18.68 per cent, the highest in the country. He informed that when he assumed power seven years ago, situation of power, roads and water was quite bad. Now, Madhya Pradesh is the only state in the country to supply power for 24 hours to industries. Feeder separation work is progressing at rapid pace in the state. Following separation, power to industries and farmers will be supplied separately and 24-hour power will be made available in villages from 2013.

Mr. Chouhan said that 85 thousand kilometre long roads have been constructed in the state so far. Area under irrigation has increased from seven lakh hectares to 21 lakh hectares. It will be increased to 25 lakh hectares next year. Rs. 425 crore Narmada-Kshipra-Simhastha Link Project is being implemented for turning Malwa region green again. The project will supply drinking water to 3,000 villages in the region. He said that entire Malwa region will be turned green in future by linking Parwati, Kali Sindh and Gambhir rivers with Narmada river.

He also referred to the award conferred to the state by the President recently. He informed that Madhya Pradesh stands third in the country in wheat procurement and will soon equal Punjab and Haryana. State’s e-procurement system has been lauded throughout the country.

A number of concrete steps have been taken to make agriculture profitable. At the same time, loans are being provided to farmers at zero percent interest. Farmers are being given Rs. 100 per quintal bonus on wheat procurement. He said that agro processing industry has also been promoted in the state. Policies have been framed for organic farming and food processing.

The Chief Minister informed that “Beti Bachao Abhiyan” has been launched in the state for women’s empowerment apart from launching a number of novel schemes like “Ladli Laxmi Yojna”, “Gaon Ki Beti Yojna”, formation of women’s battalion, special helpdesk for women in police stations, enhancement in upper age limit for government jobs etc. Referring to health sector, he said that the State Government is providing free treatment and medicines to all the poor.

Mr. Chouhan also gave information about Higher Education Loan Guarantee Scheme started in the state. He threw light in detail on efforts made in skill development sector. He said that ITIs have been opened under PPP mode in the state. A number of other institutions have also been opened which will provide jobs to trained youths and remove unemployment. He also informed about state’s Public Service Delivery Guarantee Act. He said that services sought by common people are delivered to them within a prescribed time-limit.

Turning towards the Lok Sabha Speaker Mrs. Meira Kumar, Chief Minister Mr. Chouhan stressed the need for electoral reforms and demanded to hold Lok Sabha and Vidhan Sabha elections simultaneously. He described state funding as necessary for elections saying that frequent elections mar development process. This will help put a leash on use of black money in elections and corruption, he added. ( pervezbari@eth.net)