New Delhi:  Opposition parties on Tuesday termed the nomination of the  retired Chief Justice  Ranjan Gogoi to Rajya Sabha by the Modi government as  one of the most “serious, unprecedented and unpardonable assaults” on the basic structure of the Constitution.  Urging the President of India to rescind the nomination of Gogoi, they alleged the Modi government is brazenly undermining the independence of the judiciary.

Principle opposition Congress said  the nomination of Justice Gogoi has weaken the stand judiciary which thrives, strengthens, works and prospers on perception, on faith, on belief.

“I  straightaway disabuse of the usual dirty tricks department of the ruling party, which gives completely inapplicable and misleading examples, whose only objective is to derail, divert and digress to mislead and  to fool the people of this country eat grass and are ready to be fooled.”

Example number 1 – Wrong and inapplicable but given is that of Justice RanganathMisra. It is not told to you that he was appointed to the RajyaSabha six years after he demitted office as the Chief Justice of India. Six years, over half a decade!

Example is given of Justice Mohammad  Hidayatullah, who, of course, never went to RajyaSabha but became a Vice President and, therefore, sat in the Rajya Sabha. He got that post as Vice President after nine years of his retirement.

A third example – again equally misleading – is given of Baharul Islam (A) He was a Rajya Sabha Member over six years – mark my words – before becoming a Supreme Court Judge. Second in any case, it was five to six years later.

Singhvi said the perception has been growing that the judiciary is not able to stand up with its usual vigour and fearlessness against executive and legislative in assault and an onslaught, should not given a push by this Government.

To buttress his point, the Congress spokesperson quoted late BJP leader Arun Jaitley who had said ““Pre-retirement judgments are influenced by a desire for a post-retirement job but there should be a gap (before appointment), because otherwise the government can directly or indirectly influence the courts and the dream to have an independent, impartial and fair judiciary in the country would never actualise”.

Justice Gogoi, who before retirement, delivered the Babri Masjid-Ramjanambhoomi judgment in November 9, 2019 which came under fire from the former top judges as well as civil society groups.  Even in an article former Supreme Court judge, Justice Markandey Katju said “former CJI Gogoi was blot on judiciary”.

CPI (M) also expressed its firm objection to the nomination of Gogoi to Rajya Sabha.

“By nominating the former CJI to the Rajya Sabha, the Modi government is brazenly undermining the independence of the judiciary and subverting the separation of powers between the organs of the State, which is an inviolable principle enshrined in our Constitutional scheme.”

It even recalled the Gogoi’s observation who himself said last year itself that “There is a strong viewpoint that post-retirement appointment is a scar on independence of judiciary”.

It pointed out that the recent delays in delivery of justice, mid-night transfers of High Court judges and the delay in taking up the challenges to abrogation of Article 370 and the CAA have not evoked confidence among the people and are not in consonance with their legitimate expectations.

The Polit Bureau is firmly opposing the move by the government in the light of widespread criticism that judiciary is being pressurized by the Executive and abdicating its responsibility.

In the interest of our Constitutional spirit, this trend must be set right urgently, the CPI (M) urged the President of India to rescind the nomination of Gogoi.

Echoing same sentiments, Social Democratic Party of India national president MK Faizy  said the nomination of Gogoi is be seen as  a”reward” from the ruling   BJP  for sabotage judiciary in major cases like Babari Masjid demolition, Rafal scam and the  locked down of Jammu and Kashmir.

Faizy said secular lawmakers and intellectuals underlined the influence of Hindutva politics in the Babri Masjid verdict that had thrown to winds basic principles of natural justice.

Gogoi was also the judge responsible for unleashing the forces of disruption in Assam by making ground for NRC, he added.

It is a clear example of how BJP rewards those who show willingness to act in favour of Sangh and pronounce judgments against democratic and judicial values, he said.

Meanwhile, former law minister and noted lawyer Kapil Sibal also criticized the nomination of Gogoi saying there are many controversies surrounding him. In a tweet, he made a comparison between Justice H R Khanna and Justice Gogoi saying Justice Khanna upheld the rule of law while Gogoi compromised his own and the integrity of the institution.

2)Standing up to govt.

Ranjan Gogoi forl apping up a Rajya Sabha nomination for

2) Standing in line with it

3) Compromising his own and the integrity of the institution 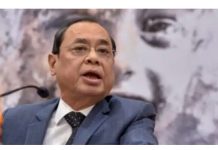 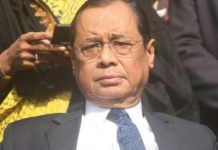