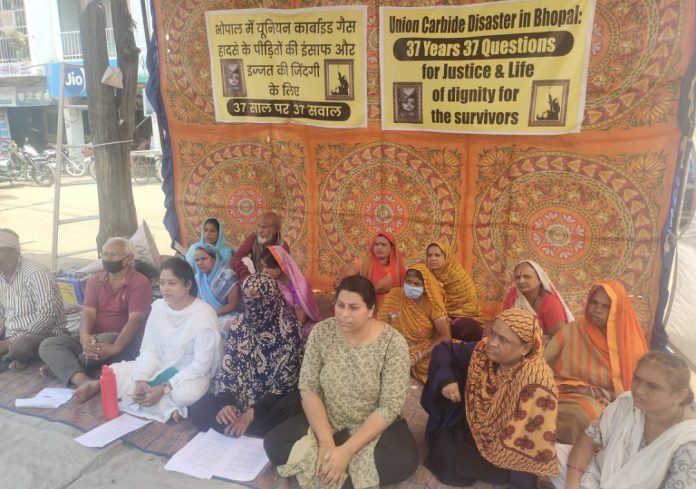 BHOPAL – Four organizations of the survivors of the 1984 Union Carbide disaster in Bhopal on Tuesday launched their 37-day campaign for justice and a life of dignity for the Bhopal survivors to commemorate the 37th anniversary of the disaster on December 2-3 this year.

Through the Campaign – “Bhopal Disaster: 37 years; 37 questions” – the organizations wish to highlight urgent concerns regarding compensation, criminal justice, medical, economic and social rehabilitation and environmental remediation of polluted lands that need to be addressed to stop the ongoing disaster.

Addressing a joint Press conference Rashida Bee, president of the Bhopal Gas Peedit Mahila Stationary Karmchari Sangh said: “Starting from today, survivors of the disaster will be asking one question every day for every year of the long aftermath of the disaster. While both Central and state governments agreed in 2010 that the American corporations had to pay additional compensation, neither has filed an application for urgent hearing of the Curative Petition pending before the Supreme Court till today. We want to know why the governments have chosen not to get the petition heard for last 11 years.”

“Dow Chemical USA’s business in India has grown dramatically in last seven years. In these seven years, the company has ignored six successive summons issued by the Bhopal District Court to appear in the criminal case on the disaster,“ said Shehzadi Bee of the Bhopal Gas Peedit Mahila Purush Sangharsh Morcha. “So, our question of the day would be how the Indian government can allow a company that does not obey laws of the land to do business in this country?” she added.

Rachna Dhingra of the Bhopal Group for Information & Action questioned the Central and state government’s competence and integrity in addressing issues of medical care and rehabilitation of the survivors. Despite the passage of 37 years the mainstay of healthcare of the survivors continue to be symptomatic drugs that provide temporary relief if at all. So, “we will be asking such basic questions like — why no treatment protocols for exposure related chronic illnesses till today,” she added.

“We will be asking questions on issues of ongoing contamination and remediation of the land in and around the abandoned Union Carbide factory,” said Nousheen Khan of Children Against Dow Carbide. ”Like despite being entitled by laws in India and USA to seek compensation from Dow Chemical for the polluted land, why has the MP Government never filed a claim against the corporation,” she wondered.

ON DAY ONE: QUESTION ASKED

“As per the state government’s data as many as 5295 deaths occurred as a result of the disaster. Out of all persons who died there are 5000 widows who need financial support. Hence, is the government suggesting that the number of all the children, all unmarried women and all unmarried men who died due to disaster was only 295?”

Kids with deformities of Bhopal gas-hit families can be rehabilitated