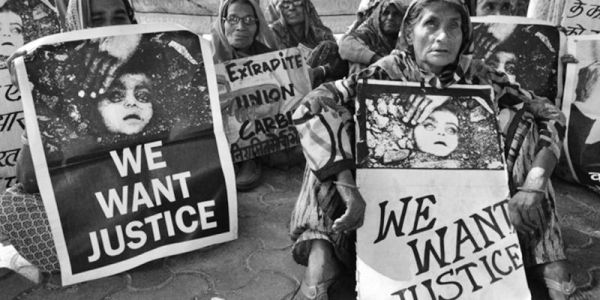 Addressing a Press conference here the organizations said that despite their urgent request, the Minister has not taken a single step in the last eight months, to prevent Union Carbide Corporation from escaping criminal liability for the gas disaster.

The organizations said that Union Carbide Corporation is charged with culpable homicide and other grave offences for the gas disaster, is fully owned by Dow Chemical since 2001. Last year, Dow Chemical merged with DuPont Inc. and in February this year Dow-DuPont Inc. has announced plans to trifurcate in a manner that makes Union Carbide disappear after June 2019.

“Since there was no sign to indicate that our Minister or his officials knew about Union Carbide’s plans to disappear, we took it upon ourselves to inform the Principal Secretary of his department in February this year. Three months later, in response to a request under RTI we were told that the letter has not been received. Our letter to the Prime Minister on the same subject was forwarded to the Chief Secretary of the Government of Madhya Pradesh on March 5, 2018. Our request for documents under RTI related to this letter filed on September 8, that should have been made available last month, remains denied.” said Rashida Bee, president of the Bhopal GasPeedit Mahila Stationery Karmchari Sangh.

President of Bhopal Gas Peedit Mahila Purush Sangharsh Morcha, Nawab Khan said: “By failing to act against the imminent disappearance of Union Carbide Corporation, the BJP governments at the state and the centre are repeating what they accuse the Congress Party of. Our letter to the CBI, the prosecutors in the criminal case that works directly under the PMO, got forwarded to a local police station! It is like history is repeating itself as a farce.”

“While the Congress governments colluded with Union Carbide in the earlier phase of the Bhopal disaster, in the later years the BJP governments outdid them in getting in bed with Dow Chemical, UnionCarbide’s owner. Going against the stated policy of the Government of India on Dow Chemical’s liability, the current Finance Minister Arun Jaitley gave a clean chit to the corporation in his legal opinion as a lawyer. Since BJP came to power at the centre, 5 notices sent by the Bhopal District Court asking Dow Chemical to explain why it is not making Union Carbide appear in the ongoing criminal case on the disaster, have been ignored. The PM has had dinners and photo sessions with Dow Chemical’s CEO during his trips to USA but has not taken a single step to ensure that Dow Chemical, that does business in India, obeys the laws of the land.” said Satinath Sarangi of the Bhopal Group for Information and Action.

“While he has done nothing to stop killer Carbide escape criminal liability, Minister Vishwas Sarang is distributing these chocolates with his picture to improve his image among the younger generation.Doesn’t he know sugar is bad for kids?”, said Nousheen Khan of the Children Against Dow Carbide, with a few of the chocolates in her hand.