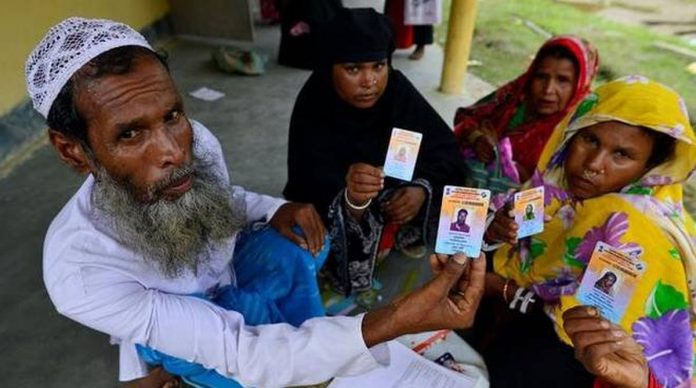 Guwahati/ New Delhi: A little known and pro-BJP organization, the Janagosthiya Samannay Parishad, Assam (JSPA) on Thursday launched a portal for conducting the first-ever census of what it called Assamese Muslims or the indigenous Muslims.

The move is fraught with dangers for the unity of over 1.4 crore strong Muslim community in Assam who have already been under constant onslaught from the communal forces due to their formidable population in the state.

The move comes amid reports that the National Register of Citizens (NRC) is being updated and implementation of the crucial Clause 6 of the Assam Accord is being kept in cold storage by the present BJP-led government.

JSP A convener Mominul Aowal claims that there are around 40 lakh indigenous Muslims across the state and they have an identity different from the Bengal-origin Muslim. He further claims that there was an attempt to merge the two, terming it unacceptable.

Mominul Aowal is also the chairperson of the Assam Minorities Development Board who was appointed by the BJP-led state coalition government.

“In 2018-19, the Assam government had allotted ₹ 100 crore for the welfare of indigenous Muslims, but no one knew how the amount was spent. The Assam government had also promised a census of the indigenous Assamese Muslims. “Once this census is completed, we’ll have solid data which will be beneficial for the Assamese Muslims,” said Aowal, adding it will be helpful once Clause 6 of the Assam Accord is implemented.

Clause 6 says: “Constitutional, legislative and administrative safeguards, as may be appropriate, shall be provided to protect, preserve and promote the cultural, social, linguistic identity and heritage of the Assamese people.”

According to the 2011 census, the Muslim population in Assam was 34.22 per cent — in numbers, it comes to over 1.4 crore making it the second largest Muslim-populated state within the country  after Jammu and Kashmir percentage-wise. The Parishad plans its drive among around 40 lakh indigenous Muslims across the state. The JSPA, which claims to represent three categories of indigenous Muslims — Goriya, Moriya and Deshi – says indigenous Muslims are facing a major identity crisis because of the Bengal-origin Muslims.

“It is unfortunate that in the name of Islam, these indigenous communities are being merged with the Miyas (Bengali-speaking migrated Muslims). To ensure that they have a separate identity, we are going for their census as the first step,” Aowal mentioned.

This comes in the backdrop of the Gauhati High Court ruling that a person can’t be declared a foreigner just because he could not establish his linkage with all his relatives on the voter list, and possession of properties pre-1971 could be seen as corroborating evidence that the petitioner is a descendant of people who were already living in Assam before 1971.

The ruling came on a petition filed by Haider Ali who came from Barpeta district in Assam and challenged the Barpeta Foreigners Tribunal ruling declaring him a foreigner on January 30, 2019, for having failed to prove his linkage with his relatives on the voter list.

The Gauhati High Court ruling said: “Ali, 33, had established his linkage with his grandfather and father, both of whom featured on the voter lists of 1965 and 1970 and owned properties in Assam before 1971, documents whose admissibility was not rebutted by the tribunal.”

Sabita Devi, a lawyer who is associated with the Guwahati-based non-profit organization Centre for Environment, Social and Policy Research (CESPR) said the ruling could be considered landmark as it would result in bringing relief for many who are battling similar cases at the Foreigner Tribunals to prove their citizenship.

Devi says in the Ali case, the court examined all aspects, often overlooked by the tribunals, and upheld the constitutional right of the citizen.

Aowal said the online exercise would be done using digital means. The Parishad has created a portal with a three-month window (from April 15) to submit all relevant documents given by the organization and competent government authority. “We’ll complete the entire exercise within a year and publish it,” Aowal said, adding there will be scope for rectification.

According to his claims,  the Goriyas converted from various indigenous groups and tribes across Assam, whereas the Moriyas’ ancestors were brought by the Ahom kings to make weapons and utensils and were settled in various parts of the state, and the Deshi converted specifically from the Koch-Rajbongshi community.

“The Assamese-speaking Muslims qualify to be termed indigenous under the UN definition and we plan to push for that,” he mentioned.

The BJP-led Assam government had last year announced a survey to identify the indigenous Muslim population of the state. It also included the socio-economic census of indigenous Muslims, but it didn’t proceed beyond the announcement.

However, a section of the indigenous Assamese community disagreed with the initiative, saying post this exercise, Assamese Muslims will simply become “non-Miya Muslims.”

Questioning the move, Kabir Firaque, an Assamese Muslim journalist, said it is important to define who Assamese Muslims are, and find out their numbers, but this exercise will end up underlining their Muslim identity rather than their Assamese identity.

He said the people behind it believe that it will distinguish Assamese-speaking Muslims from Miya Muslims. They appear blind to the fact that this will reduce their identity to a subset of Muslims,” “Why not a census of all Assamese groups — Ahom, Koch, Sutia, Goriya/Moriya, various caste Hindus and various tribes? Such an exercise would identify Assamese Muslims as a subset,” asked Kabir Firaque who is based in Delhi.

Echoing similar views, a community leader from Assam warned the move is fraught with dangers and it is being seen as an attempt to divide Muslims on ethnic lines.  It is not secret on whose bidding this exercise is undertaken by the self-styled champion of “indigenous Muslim population” of the state, he told Muslim Mirror. He further underlined the NRC exercise has busted the myth of “illegal migrant influx theory” and the turning Assam into a “Muslim-majority state”.

Contrary to Himanta’s claim, there is sharp decline in fertility of Muslims in Assam since 2005-6