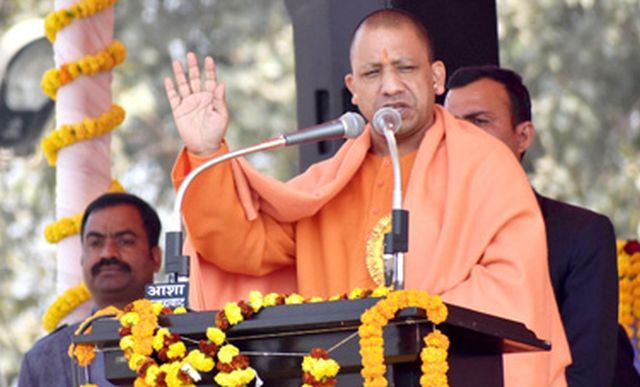 Until September in the year 2020, one year back, under the BJP UP CM Ajay Singh Bisht, there were 139 persons booked under National Security Act (NSA). This was the performance chart of one year alone. Out of this 76 were for in context to cow slaughter, 13 for anti-CAA protests and 37 for heinous crimes, informed The Wire. How disparagingly, this draconian piece of legislation had been evoked, was to be made clear, as per a report published in The Indian Express , in which UP Additional Chief Secretary (Home) Awanish Kumar Awasthi, informed that as until August 31, 2020- the Bareilly police zone alone had accounted for 44 of the cases. It was enumerated that NSA charges apart, in the last year, 1,716 cases had been registered under the Uttar Pradesh Prevention of Cow Slaughter Act and over 4,000 people arrested. A closure report has been filed in 32 cases after the police failed to gather evidence against the accused. Besides, the police invoked the UP Gangsters’ Act against 2,384 and the Goonda Act against 1,742 in the state on the same charges.

In the same report, it came to light that towards the CAA protests, the NSA has been invoked against the maximum people (5 each) by the Aligarh and Mau district administrations. All five in Aligarh face charges for the anti-CAA protests, which on February 23, 2020 in Kotwali area, had resulted in violence. Station House Officer, Kotwali Police Station, said all five — Imran, Anwar, Sabir, Fahimmuddin and Liaq Baba- remain in jail.

There is also an extensive report published in The Wire 3 on September 10, 2018, that before the 2019 general elections, about how UP government between 2017-18, has used NSA as a weapon against Muslims. The Wire had met 15 families of those accused under NSA, and had elaborated the ordeal of the families, targeted solely on communal lines. In a report on NDTV on July 26, 2017 4, when UP government was mere 4 months old, communal violence in UP had gone top in the country, ‘Communal Violence Goes Up In Country, Uttar Pradesh Still Tops List. Uttar Pradesh also continues to top the list of states with maximum communal violence incidents, and deaths. 44 people were killed and 540 injured in UP in 2017.’ It may also be mentioned that NDTV on the same date 5 , had informed that ‘ the central government had disclosed that Report Of Communal Incidents In Last 3 Years, UP Tops List With 450. Minister of State for Home Kiren Rijiju said that in Uttar Pradesh, 155 such incidents took place in 2015 and 133 in 2014. Barely three months in office, members of Hindu Yuwa Vahini, founded by Ajay Singh Bisht were set to be involved in a murder of a Muslim man in Bulandsheher, UP, told Economic Times on May 14, 2017 6.

How farcically NSA was evoked against Muslims in UP, was tried in the Courts of law, and Allahabad High Court, splashed an egg on the BJP government face, as it quashed 94 of the 120 FIRs against those accused over cow-slaughter. HC also did observe as to how blatantly NSA was abused against Muslims. It appeared in a report in The Indian Express on April 7, 2021 7 , ‘ 94 out of 120 orders quashed: Allahabad High Court calls out abuse of NSA in Uttar Pradesh Between January 2018 and December 2020, the Allahabad High Court ruled in 120 habeas corpus petitions challenging preventive detention under the NSA. In 94 detentions, it quashed orders of DMs in as many as 32 districts and ordered the release of the detainees.’ But, the lives of all those Muslims are to be ruined beyond repair-for decades to come. In the first year of governance, rather, in the first 11 months, the La Thok-Do government of Ajay Singh Bisht government conducted 4 police encounters per day! Here also The Wire, published a report after meeting 14 such families who had lost their kith-and-kin in police encounters. The report was published Feb 24, 2018 8.

There has been a steady rise in the number of sedition cases in India, since the BJP government under Narendra Modi had sworn to power. What may be termed as a true carte-blanche to BJP ideology. According to the sedition-cases-base, published in Article 14 9 on February 2, 2021, the report is starting:

1-65% of nearly 11,000 individuals in 816 sedition cases since 2010 were implicated after 2014 when Modi took office. Among those charged with sedition: opposition politicians, students, journalists, authors and academics.

2-96% of sedition cases filed against 405 Indians for criticising politicians and governments over the last decade were registered after 2014, with 149 accused of making “critical” and/or “derogatory” remarks against Modi, 144 against Uttar Pradesh (UP) chief minister Yogi Adityanath.’

3-A 28% increase in the number of sedition cases filed each year between 2014 and 2020, Modi’s time in office, compared to the yearly average between 2010 and 2014, the second term of the United Progressive Alliance (UPA) administration.

4-Much of this increase is due to a surge in sedition cases after protest movements, such as those against the (CAA), 2019 and the rape of a Dalit teen at Hathras in UP.

6-In UP, 77% of 115 sedition cases since 2010 were registered over the last four years, since Yogi Adityanath became the chief minister. More than half of these were around issues of “nationalism”: against those who protested the CAA, for shouting “Hindustan Murdabad”, allegedly celebrating Pulwama attack and India’s loss in 2017 ICC Champions Trophy.

The way Sedition Law has been used by the ruling party against dissenters, all across the nation, has finally, made Supreme Court, to observe that Sedition Law is a colonial relic and which needs judicial review ‘the manner in which law enforcement authorities are using the sedition law to control free speech and send journalists, activists and dissenters to jail, and keep them there, informed The Hindu on July 16, 2021 10 .

The latest specter to hit Muslims, apart from mob lynching, business boycotts, love-jihad, NSA, UAPA etc, is the anti-conversion law, potentially known as UP Prohibition of Unlawful Conversion of Religion Ordinance, which is a definite tool to target Christians too, there were ‘about 35 arrests, dozens of FIRs in first month of UP unlawful conversion law. The UP police have made more than one arrest a day under the PUCR Ordinance, 2020, which came into effect on 27 November 2020,’ tells The Print on December 26, 2020 11 . The latest to be arrested under the same law has been Kaleem Siddiqui and there is a witch-hunt of raids at his place and on his associates. According to The Indian Express 12 on October 8, 2021, ‘ the UP Anti-Terrorism Squad (ATS) has arrested one more person in connection with the alleged illegal conversion racket, taking the total number of arrests to 15. ATS said that Sarfaraz Ali Jafri, who was looking after the work of Kaleem Siddiqui’s Global Peace Centre, was arrested from Lucknow. On June 20, the ATS had claimed to unearth an alleged illegal conversion racket by arresting three persons — Delhi’s Jamia Nagar residents Mufti Qazi, Jahangir Alam Qasmi, and Mohammad Umar Gautam. Since then, the ATS has arrested 12 people from UP, Delhi, and Maharashtra in connection with the case. Among those arrested later included Kaleem Siddiqui, Rameshwar Kavde, Bhupriya Bando alias Arsalan Mustafa, Kaushar Alam, Hafiz Idris, Mohammad Saleem, and Dheeraj Jagtap.’

Around 150 slaughter houses, which offer jobs and employment to Muslims and Dalits, have been closed in UP in the last four-years of UP government, as per TOI on September 21, 2021 13 . The leather industry, particularly in Kanpur, is on crutches as in the last around five years, ‘the annual turnover of tanneries from Kanpur which used to be Rs 2,000 crore has been now reduced to Rs 1,200 crore last year, ’ informed a report in FreePressJournal on July 14, 2021 14 .

Not a single Muslim individual, howsoever high-and-mighty, across Muslim societies, from inside the mammoth of more than 40 millions in UP, has not been under duress and stress in the last five years, expect for the touted-few who joined the ranks with Mohan Bhagwat, Indresh Kumar, Rajnath Singh, Dinesh Sharma, Brijesh Pathak etc. The most powerful Muslim face in UP Muhammed Azam Khan-sitting MP, his wife and son-both sitting MLAs were put behind bars allegedly over a forgery case, while BJP MP VK Singh and UP Deputy CM KP Maurya face the same allegations!

No wonder, there are now a clear set of two laws in the country. It is high time, that incumbent ‘secular and socialist’ forces revert India to its essential ethos in UP in 2022 and in 2024 at the Center.