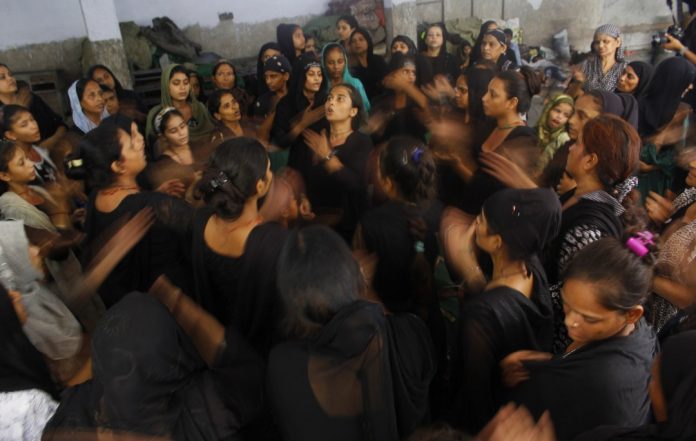 Ashura, the 10th of the first month observed by Muslim brings with it the sorrow of the killings of not one, but plenty who stood against the tyranny and dystopian governance in reigns of Yazid ibn Mu’awiya and his breach of the Hasan-Mu’awiya treaty as labelled by historian Wilferd Madelung.

As Maria Dakake holds that Hussain considered the Umayyad rule oppressive and misguided, and revolted to reorient the Islamic community in the right direction, Shia school of thought commemorates his death annually by taking out processions, and lamenting in households or Hussainiyas (also known as Imambargahs). They consider his suffering and death became a symbol of sacrifice in the struggle for right against wrong, and for justice and truth against injustice and falsehood.

Mourning – An annual practice
In Delhi, the mourning rituals are mostly hosted in Shah-e-Mardan Dargah, Jor Bagh and Panjah-Shareef, Kashmere Gate where thousands gather to listen to the Islamic lectures, attend processions and reflect on the history of Karbala together and lament over the tragedy that happened to the household of of Prophet Muhammad.

It is observed that people over the span of Ashura, wear black clothes as a visual representation of mourning, and refrain themselves from acts of joy. We also notice a few men and boys practising self-flagellation (Tatbir) which is also considered haram (prohibited) by some renowned Irani Usuli authorities (maraji) that Shias follow.

Some men have the belief that they are practising Zanjeer zani to show their support to Hussain, how they would’ve sacrificed their lives over him, while we also see organisations like WhoIsHussain who host blood donation camps around the areas.

We also see women beating their chests in unison using Latmiyat, Nawhas or Marsiya to lament over the tragedies that had dawned upon the family of Fatima, the mother of Hussain and beloved daughter of Prophet Muhammad.

Hussain along with Abbas ibn Ali, settled on the lands of Karbala and laid down the camps. However, three days before the battle was announced the ruthless army of Yazid stopped water for Hussain and his convoy knowing they had children to nurse, and feed.

Out of thirst and hunger, a lot of children cried, ‘Al Atash!’ (the thirst). Among these children were Lady Sakina, the 4-5 year old daughter of Hussain. Listening to these cries, Abbas couldn’t control himself and went to fetch water from the Euphrates. He was the flag bearer of the caravan of Hussain, and in his memory on the 8th of Muharram, we see young boys and men hoisting the Alam (flag) with pain and pride!

After everyone who could fight from Hussain’s side was martyred, he said, “Hal Min Nasirin Yansurna” (Is there anyone to help me?). On hearing this, women inside the camps were seen restless as his youngest, Ali Asghar ibn Hussain was wailing out of thirst. When a 6 month old baby isn’t nursed for three long days in a deserted land, imagine the suffering he would’ve experienced!

Hussain took him to the battlefield, thinking maybe someone might have a warm heart and could quench the thirst of his son. The appearance of Ali Asghar and his dried up tongue almost made the whole army of Yazid soft cornered, but Hurmala killed the baby ruthlessly, piercing his neck with a three-spear arrow that he rolled over his fathers body. Hussain then collected his blood in a cupped hand and cast it towards the sky, complaining to God of his suffering.
Fatherhood

Lady Sakina had a very special bond with her father. She used to sleep on his chest every night. In fact, Maqtals claim that he even let her sleep one final time before going to the battlefield to protect her. He was aware that post his death, the army of Yazid, specifically Shimr would torture the women and kids.

Every Ashura, we are reminded that the tale of Karbala, even though Hussain lost a battle on it about 14 centuries ago is still alive in the hearts of people, and is appreciated for his fight against oppression. Karbala has the holy shrine, the graves of the martyrs and is highly visited by practitioners of Shi’ism every Muharram and during Arba’aen (40 days upon completion of Hussain’s death).

The message from the martyrdom of Hussain (A.S.)