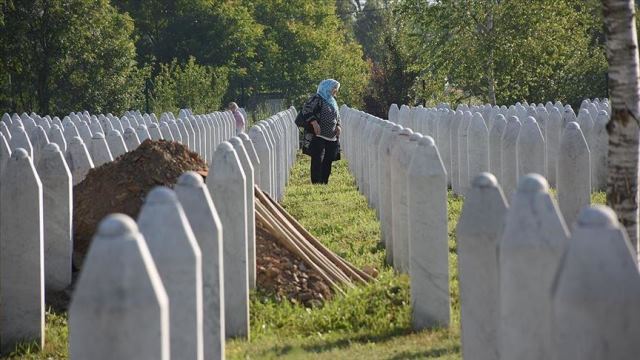 Bosnia and Herzegovina on Saturday marked the 25th anniversary of the 1995 Srebrenica Genocide, bidding farewell to nine newly identified victims of the massacre at a memorial service.

Every year on July 11, newly identified victims of the genocide are laid to rest at a memorial cemetery in Potocari, eastern Bosnia. Thousands of visitors from various countries attend the service.

The memorial center is the focal point of remembrance for friends and relatives of the victims, mostly men and boys, murdered by Bosnian Serb militias.

At this year’s ceremony, world leaders sent video messages on the anniversary of the genocide being marked under the shadow of the coronavirus pandemic.

Turkish President Recep Tayyip Erdogan was among the leaders who sent a message.

Erdogan said that although a quarter of a century has passed since the genocide, our pain is still fresh.

“Although I am not physically among you because of the coronavirus, my feelings and thoughts are always in Bosnia, always with you,” he added.

“We will never forget our martyrs nor the genocide in Srebrenica,” Erdogan said.

The Turkish president concluded his address with a message that Turkey and the Turkish people stand by Bosnia and Herzegovina.

Sefik Dzaferovic, the Bosniak member of the Presidency of Bosnia, said that Srebrenica has become synonymous with the suffering of innocent people, and the crime committed was called by the only real name — genocide.

“Today, we are here in the Potocari valley of sorrow and pain to see off together the remains of nine innocent victims, some of whom were young men, killed only because they […] were Bosniaks,” Dzaferovic said.

“Today, 25 years later, the whole civilized world has become aware of the scale of the crime committed and the mistakes made,” said Dzaferovic.

Slovenian President Borut Pahor in his video message said the key for the future of Bosnia “is truth and not denial.”

“We cannot change the past, but we can change the future. For the future of Bosnia and Herzegovina, the key is truth and not denial, respect and not hatred, open dialogue and not quarrel,” Pahor said.

Montenegrin President Milo Djukanovic said the Srebrenica Genocide is a common shame for all those who did not prevent it.

“It is a testimony to the terrible reality of a bloody war, an eternal warning and reminder to all our people that without the truth of the past there is no peaceful or secure future,” said Djukanovic.

Salko Ibisevic, who was only 23 when he was killed, was the youngest victim to be buried this year. Hasan Pezic, the oldest, was 70, and was laid to rest in this year’s ceremony.

Also at the historic bridge in Mostar — an iconic multi-faith city — people gathered on Thursday to throw white lilies into the Neretva River, symbolizing the innocence of the genocide’s victims.

Elsewhere, hundreds of motorcyclists from across Europe held a procession from the country’s capital Sarajevo to Srebrenica to commemorate the victims.

More than 300 bicyclists from across the country also gathered in the northern city of Bihac to honor the victims. A group of 10 bicyclists on Monday also took off from Austria’s capital Vienna.

On Wednesday, a three-day peace march in Zvornik to commemorate the 25th anniversary of the genocide in Srebrenica began under the shadow of COVID-19.

Traditionally thousands of people from all over the world come to the Bosnian town of Nezuk every year to participate in the march. This year, it started from Crni Vrh near Zvornik, as new COVID-19 cases were recently detected in Nezuk.

The participants marched for three days, and spent nights at designated areas before concluding at a cemetery in Potocari, where the funeral prayer and burial ceremony were held for nine victims.

Since 2005, thousands of people have attended the Mars Mira — which means Peace March in Bosnian — following the same forest path used by the Bosniaks when they were fleeing the Srebrenica Genocide.

More than 8,300 Bosnian Muslim men and boys were killed after Bosnian Serb forces attacked the UN “safe area” of Srebrenica in July 1995, despite the presence of Dutch troops tasked with acting as international peacekeepers.

Srebrenica was besieged by Serb forces who were trying to wrest territory from Bosnian Muslims and Croats to form their own state.

The UN Security Council had declared Srebrenica a “safe area” in the spring of 1993. However, Serb troops led by Gen. Ratko Mladic — later found guilty of war crimes, crimes against humanity, and genocide — overran the UN zone.

The Dutch troops failed to act as Serb forces occupied the area, killing about 2,000 men and boys on July 11 alone. Some 15,000 Srebrenica people fled into the surrounding mountains, but Serb troops hunted down and killed 6,000 of them in the forests.AA

Srebrenica Genocide : A cruelty against humanity