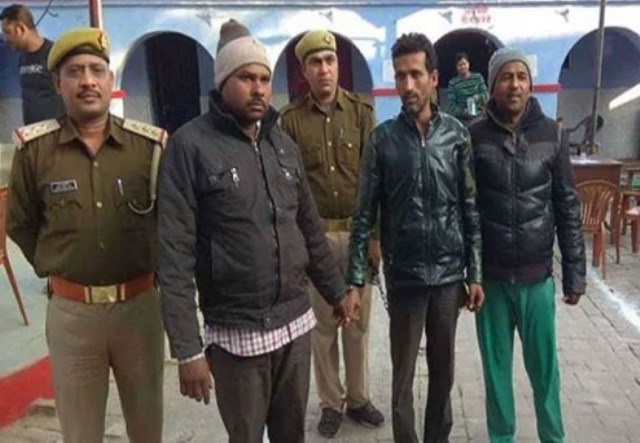 Bulandshahr : In a bizarre turn of events the UP police have invoked the stringent National Security Act (NSA) against seven men who were arrested last month for alleged cow slaughter leading to violent protest by saffron groups on December 3.

The police authorities claimed that the alleged cow slaughter by the three accused named Nadeem, Mahbub Ali and Azhar was an ‘act of terror’ and was meant to “disturb peace” in the area.

Local Bajrang Dal leader Yogesh Raj, who was one of the main accused for leading the violent protest, outsmarted police for one month till he was arrested on Jan 3. He had named seven people in his complaint against the alleged cow slaughter. However, two of them were found to be children and rest others were let off by the police for lack of evidence.

During the investigation, the local police arrested another set of half a dozen people for the alleged cow slaughter and now they have been charged under NSA. They have been identified as Nadeem, Raees, Kala, Asif Qurshi, Raqib, Aman Khan and Waseem Pathan.

In the mob violence, a police inspector and a civilian were killed. Some reports say three of them have been charged under NSA.

In its first official statement, the Yogi Adityanath government had sought stringent action against those accused of cow slaughter and did not even mention the killing of the police officer. A group of former bureaucrats strongly criticized Adityanath for not giving much importance to the killing of the cop.