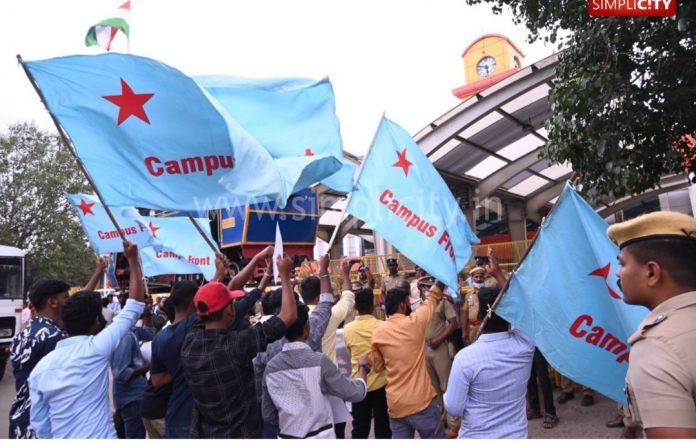 The Campus Front of India (CFI), the student wing of Popular Front of India (PFI), has termed the ban on it as “undemocratic and anti-constitutional” and said it will challenge the move in court. The CFI, however, added that it is stopping all activities in accordance with the law and asked the students associated with the outfit to “not conduct any programme or activity in the name of the organisation”, as stated in a report by ANI.

The Ministry of Home Affairs (MHA) issued a notification late on Tuesday, September 27 night, declaring “the PFI and its associates or affiliates or fronts as an unlawful association with immediate effect”. Along with PFI, the ban is also imposed on its other fronts including Rehab India Foundation (RIF), Campus Front of India (CFI), All India Imams Council (AIIC), National Confederation of Human Rights Organization (NCHRO), National Women’s Front, Junior Front, Empower India Foundation and Rehab Foundation, Kerala that have also been labelled as “unlawful association”.

Issuing a statement against the ban, CFI tweeted on Wednesday, September 28, “Ban on Campus Front is Undemocratic and Anti-Constitutional; will be challenged in court. Stopped Activities in Accordance with Law”. Claiming that it works for the students with a “vision of building socially concerned and responsible youths with secular and democratic spirit”, CFI said that it has “succeeded in achieving it to an extent,” as per ANI.

“Many educated youths who were part of the organisation have now been active in the various spheres of social activities. CFI has maintained constitutional and democratic values and not promoted activities against our law,” it said. “Hence, as an organisation that, in accordance with the law, concede the ban order by the MHA and will be stopping all activities of the organisation in India with immediate effect,” CFI added.

The outfit said that it is “not responsible” for using the name or banner of the organisation for any programme or activity or social media posts and comments. Meanwhile, in the notification issued by the MHA, it mentioned that the ban has been imposed against PFI and its associates or affiliates or fronts for “indulging in unlawful activities, which are prejudicial to the integrity, sovereignty and security of the country and have the potential of disturbing public peace and communal harmony of the country and supporting militancy in the country.”

“The Central Government hereby directs that this notification shall, subject to any order that may be made under section IV of the Unlawful Activities (Prevention) Act (UAPA), have effect for a period of five years from the date of its publication in the Office,” the notification read, as per ANI. The Centre issued the ban citing the investigation of its agencies, mentioning “the investigations have established clear linkages between PFI and its associates or affiliates or fronts,” as per ANI.

CFI has been involved with various student-related agitations and issues in the country over the last few years. With the recent hijab issue that came to light after the Karnataka High Court upheld the ban on wearing hijab in educational institutions, the organisation along with other like-minded groups carried out various protest marches after a Muslim student in Providence Girls Higher Secondary School in Kerala’s Kozhikode district had to leave the school after the school authorities said she would not be allowed to wear hijab, according to reports.

Moreover, the organisation also supported hundreds of Jamia Millia Islamia students who protested against the university’s decision to cancel the MPhil admission of the research scholar and one of the forefront student leaders during the anti-Citizenship Amendment Act (CAA), Safoora Zargar.