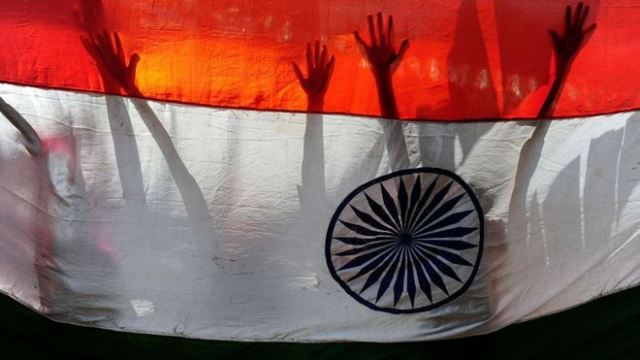 People who belong to upper-caste Hindu communities allegedly stopped a Dalit panchayat president from hoisting the national flag on Independence Day. In the wake of the caste discrimination faced by the woman panchayat leader, Amrutham, in a village in Tamil Nadu’s Thiruvallur, district collector Mageswari said that panchayat secretary Sasikumar was suspended on Wednesday. She hoisted the flag today in front of the district collector.

Amritham hails from Athuppakkam village Gummidipoondi, Tiruvallur district of Tamil Nadu who is a member of the village Panchayat Council. She was invited by the headmaster of village’s primary school for flag-hoisting on Independence Day. It is alleged that the former panchayat leader insulted her by not allowing her to hoist the flag by tagging her a ‘Dalit’ which created chaos among the people who appeared for flag hoisting ceremony. Also, Amritham, who is on the list of Dalits who has faced many difficulties and untouchability including not being able to sit in the chair of the panchayat council and barred from seeing the panchayat account papers. Amritham expressed her anguish that “sometimes only a few checks will be signed by me as the Panchayat President”.

The Tamil Nadu State Human Rights Commission (THRC) voluntarily took up the case based on reports that Amritham was detained as she was on the list. A report has also been sought on the action taken in connection with this tragic incident. Meanwhile the issue gained political attention too. Members of various parties also registered their protests in this regard of Dalit leader. Athupakkam Panchayat Secretary Sasikumar has been sacked based on the investigation, said Collector Maheshwari.

A case has also been registered against three persons, including Vijayakumar, the husband of the panchayat vice-president, for allegedly assaulting a private TV reporter Ezhil who went to cover the news. On Tuesday, Ezhil, who went to Attupakam to report the incident, as soon as he reached Attupakam, he was allegedly beaten up by Sasikumar, the former panchayat leader and three more persons. He was also kept in confinement and his mobile phone was snatched away by the five men. In the attack, he sustained injuries to the eyes and chest.

In this situation, Panchayat leader Amritham, who was denied permission to hoist the national flag on Independence Day, hoisted the national flag later at the Panchayat Council office in the presence of Thiruvallur Collector Maheshwari and SB Aravindan. Also, she sat in her seat in the Panchayat office and did chores. Then District Collector Maheshwari said, “Everyone has been instructed to co-operate with Panchayat leader Amritham” and added that she will monitor that no such incident repeats again in the district. Panchayat President Amritham said that she and her son are happy that they finally allowed her to host national flag at the Attupakkam Panchayat Council office.