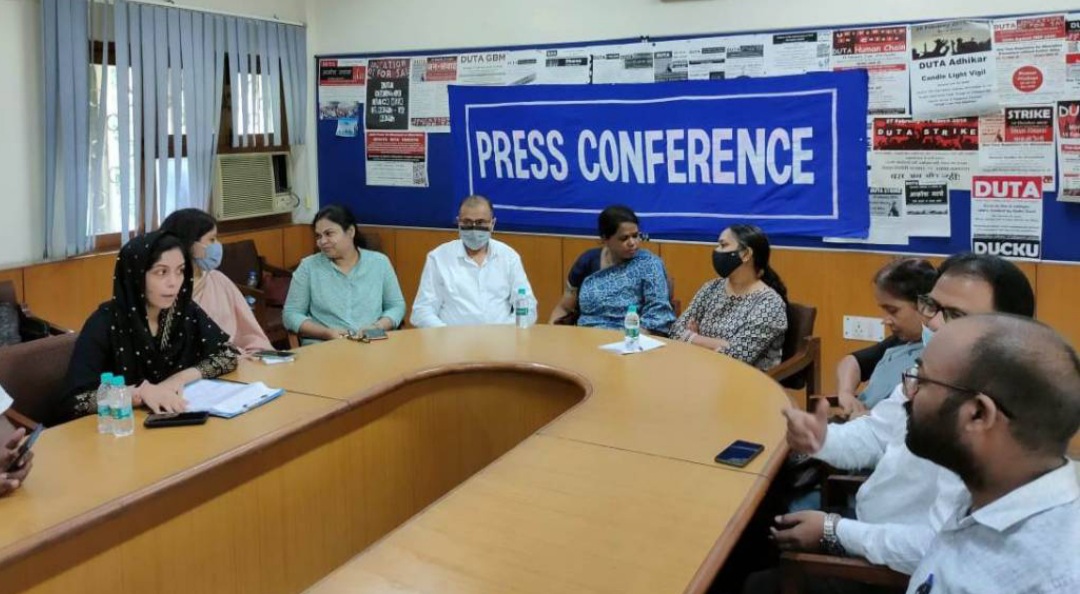 Incident shows  casteist face of Indian society. Whether they are educated or illiterate, the consciousness of caste supremacy is sitting deep within.

New Delhi: Under the current regime caste atrocity has also spread its tentacles even in   university teaching staff who are considered to be torchbearers of knowledge and propagators of equality in the society.   The latest case in point is a Dalit Professor who was slapped by an Upper Caste Professor in Lakshmibai College, Delhi University. Dalit groups and teachers demanded that the guilty professor should be fired immediately and booked under Dalit atrocity (prevention) Act.

The Dalit Adivasi Shakti Adhikar Manch (DASAM) organized a press conference here to highlight the shameful incident of teacher slapping another teacher publicly because she belongs to from a lower caste.  The incident took place during a meeting in the college on Monday, when teacher-in-charge Dr. Ranjit Kaur who is an associate professor in Lakshmi Bai College slapped Dr. Neelam asked for a little bit of time to go through the minutes of the meeting. There were 13 teachers who were also present at the meeting and saw this whole notorious incident. Dr. Ranjeet Kaur has been plotting against her since the time of her appointment and brainwashing children.

Inarguably, even today caste is reality in the Indian society and it caste-discrimination has been increased manifold since the present government came to power and it is deliberately protected by the institutions.

Dr. Neelam complained to the principal of the college of the said incident to file a written complaint in the diary but it was not accepted by the office of the principal and even denied its diary. After which, she went  to the police station Bharat Nagar where she gave the written complaint to lodge F.I.R against accused Dr. Ranjit Kaur.

She alleges the police station Bharat Nagar for working in collusion and under influence of accused for not lodging F.I.R properly under provision of SC& ST prevention of atrocities Act. The police officials didn’t register her case under relevant provisions of law and dictated a NCR for the same. The police authorities have given assurance to file the complaint on 18th August 2021 but the complaint hasn’t been registered yet.

The college authorities are pressuring Dr. Neelam to withdraw the case and have issued an arbitrary show-cause notice to her. Dr. Neelam has said that she shall fight for restoring her dignity and termed the issue is not about just slapping her, but a symbol and alarm for anyone who tries to speak against them, they will shut it down.

Speaking in her support, Dr Raghunath Prasad (Secretary Staff Council, Satyawati College, and D.U) said that this incident shows the casteist face of Indian society. Whether they are educated or illiterate, the consciousness of caste supremacy is sitting deep within.

“This incident with Dr. Neelam is a sign of the same supremacist mindset. Please report this incident in writing to DUTA. Case should be registered immediately under SC / ST harassment. There should be immediate action against the criminal and guilty teacher”

Dr. Neelam is the President of the Staff Council and the casteist attack on her is an attack on a leader, so the entire teacher community should unite and take immediate action against the culprits involved in this incident.  Neelam was known for her contribution for Dalit rights, for which she has been targeted from time to time.

Professor Dr. Kanchan (Department of Education, Central Institute of Education- D.U.) condemned the inhuman and unlawful incident. He said it is very shameful that even today; incidents of caste atrocities are taking place in higher educational institutions. The one who has slapped Dr Neelam has slapped academic institutions integrity and humanity as well. The violence shows the upper caste mentality which is still prevalent in the education sector.

Ms. Ena Zafar (National Coordinator, Dalit Adivasi Shakti Adhikar Manch) strongly condemned the incident saying it is a matter of deep shock that such an incident has taken place.

“We celebrated the 75th Independence Day in the country, but we are still not free from our caste prejudice mentality and approach. It is to be noted that such an incident took place in the prestigious university of the country between two teachers”.

DASAM stands in solidarity with Dr. Neelam and we will fight with her for justice, she added.

Professor Geeta Sahare ((Deputy Dean- Campus Development, D.U.)  Said it is shocking instead of taking action against Dr Kaur,   the college administration has given the memo to Dr. Neelam. She demanded an independent enquiry Commission for the same.

Dr Sunman Sonkar (Prof. Economics Department, Lakshmibai College-D.U.) said that this barbaric slapping incident shows the mentality which even today believes that these communities should continue to do their work. They think that the job of teaching belongs to the upper caste community. Then why are these people working as teachers in University, College and Schools? This shows the mindset that how can a Dalit Professor ask questions? The incident of being slapped only for demanding to read departmental meetings exposes the upper caste face of Indian society. This is the condition of professors like Delhi University; they are still casteist from within

Ms. Pushpa Vivek Rashtriya (Dalit Mahila Adhikar Manch) said that this incident with Dr. Neelam has been done to stop the demand for rights and consciousness within the Dalit community. The society is not able to tolerate the participation of the Dalit community in education. Dr. Sujit Kumar (Hindi Department, Delhi College of Arts and Commerce, D.U. ) said that he has known Neelam from the time of JNU where she studied. She was capable of responding to that slap but she did not react to it, saving a teacher’s dignity. He talked about constitutional justice. It should be thought about what will happen to the villages and cities of India when they can attack a conscious professor like Dr. Neelam.

Dr. Sandeep (former Vice President of DUTA) said that we will have to fight this battle from Parliament to the road. This incident shows the extent to which the casteist attitude of administration works. Dr. Neelam should get justice. Delhi University should take immediate cognizance and investigate this incident and casteist Dr. Ranjit Kaur should be immediately sacked from the college.

Dr. Sagar (SDTM President, Professor, and D.U.) said that incidents of atrocities on Dalit community have started increasing continuously, it should be opposed. The incident with Dr. Neelam should be immediately registered under SC-ST harassment as it is an attack on the dignity of a Dalit teacher, so a case of defamation should also be registered against then. The Delhi University administration and the college should immediately take action against the guilty teacher.

In the end, Dr. Neelam said that she has received no support from the college authorities and is being harassed. Even the press is not allowed to meet her in college premises. She demands: Immediate termination of Dr. Ranjeet Kaur from all her posts and arrest under SC/ ST Act (PoA) 1989, withdrawal of arbitrary show- cause notice issued for Dr. Neelam and independent inquiry of the incident.