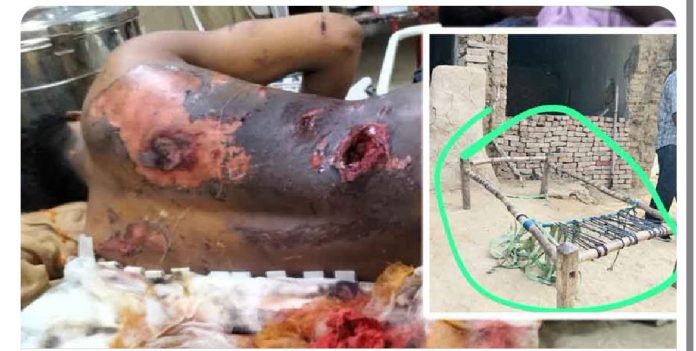 An 18-year- Dalit youth died after a bomb fitted under his charpoy exploded in Ranimau village of Gopramau Panchayat in Lucknow in the intervening night of 22 and 23 June. A case has been registered against members of the Thakur community but no one has been arrested even after five days.

“The sound of a loud bang woke me up. When I came outside the house, I could not see anything because of the smoke. The roof was burning. I started looking for the son sleeping on the bed outside the house. My son was lying 10 meters from the bed, covered in blood” his father Mewalal Rawat was quoted by The Mooknayak as saying.

This incident is not from Udaipur or a Taliban ruled country, this incident is from Ranimau of Gopramau Panchayat of Mal area, rural area of ​​Lucknow in Uttar Pradesh. A Dalit youth was blown up by the upper Caste Hindu Thakurs over a land dispute, he died a painful death… pic.twitter.com/c933j3aXSW

After the explosion, the victim was taken to a nearby hospital for treatment. He was referred to the trauma centre in Lucknow, where he succumbed to his injuries.

The explosion took place over a land dispute. Tej Bahadur Singh and Deepu Singh of Thakur caste had bought land from Arjun Singh. But the property could not be officially transferred as the cheque handed over to Arjun Singh bounced. Mewalal was a watchman in Arjun Singh’s house. Tej Bahadur and Deepu were having problems due to him. So, they decided to kill his son.