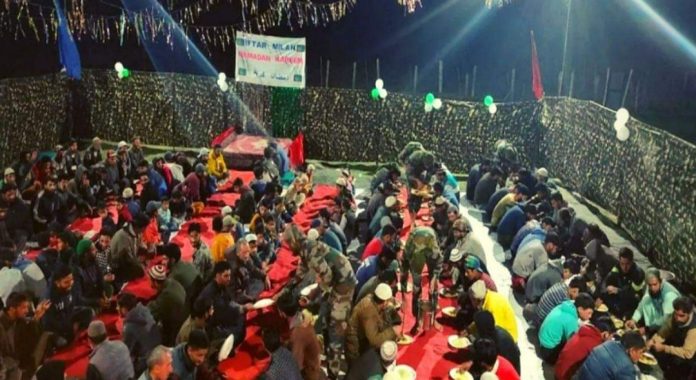 Army veterans slam  the deletion of a tweet saying “The army is India’s final stronghold of secularism”.

New Delhi: After the Hindutva hatemongers attacks, the defence ministry was forced to delete a tweet describing an iftar hosted by the Indian Army in Jammu, “carrying alive the traditions of secularism.”

“Keeping alive the traditions of #secularism, an iftaar was organised by the #IndianArmy at Arnora in #Doda District #Ramadan,” the official handle of PRO Defence, Jammu, tweeted on April 21.

The rabble-rouser editor-in-chief of Sudarshan channel Suresh Chavhanke responded to the post by tweeting in Hindi, “Ab ye bimari Bhartiya sena mein bhi ghus gayi hai?” Dukhad…. (Has this sickness now infiltrated the Indian Army? Sad).” Several others agreed with him and chastised the army.

Chavhanke is accused of making a hate speech at an event last December in which attendees allegedly swore to “fight, die for, and, if necessary, kill” to establish a “Hindu Rashtra.”

It’s worth noting that since the BJP-led NDA took office, all Iftar parties thrown by the President and Prime Minister have been suspended. All of the Islamic diplomats stationed in New Delhi were invited to the iftar events, which were intended to strengthen connections with the Islamic world. It was also a showcase of India’s religious diversity for the rest of the world to see. 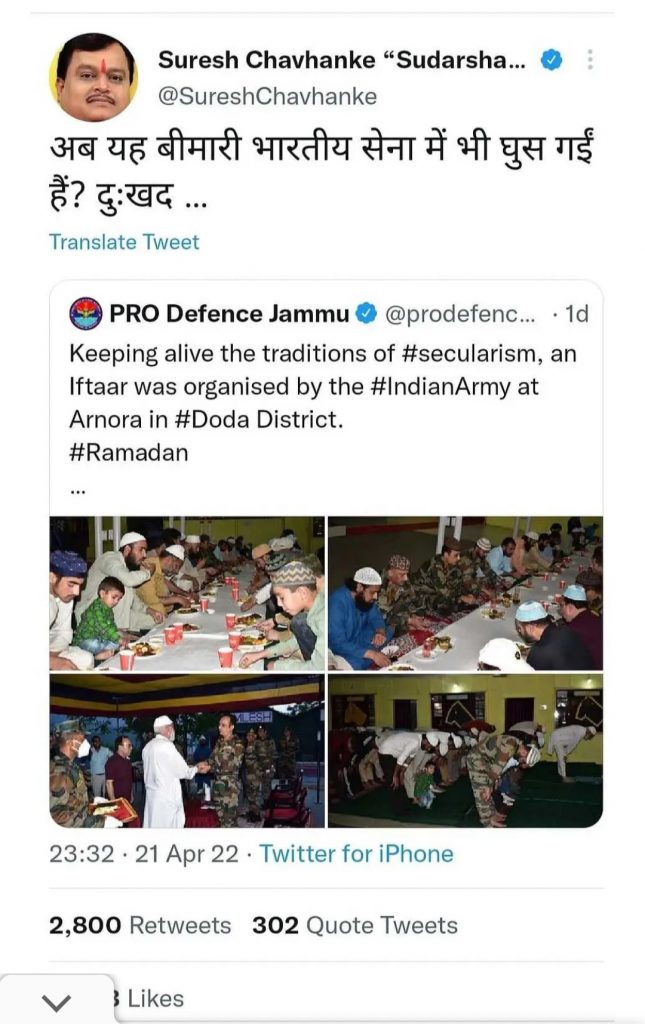 The Telegraph reported that the tweet on the iftar was deleted on Friday, buckling under pressure, leaving veterans and other Twitter users to express disgust that the defence ministry PRO had chosen to back off rather than take on the bullies.

Lt Col Devender Anand, the defence PRO in Jammu, said he removed the tweet after “adverse responses” from some persons. He informed The Telegraph over the phone from Jammu, “There is nothing more to it.”

Officials from the army and defence ministry in Delhi declined to comment when contacted about why the tweet was removed.

The office of the Union Home Minister, the Ministry of Culture, and the lieutenant governor of Jammu & Kashmir were among those tagged.

According to army veterans, hosting iftar was an age-old practise of the army in Jammu and Kashmir.

“The army is India’s final stronghold of secularism,” another military veteran stated. However, it increasingly appears that the ultimate goal is to alter the Constitution by obliterating the word “secular.”

“What’s the big deal about eating iftar? It aids the army in reaching out to the population of a Muslim-majority state. “The army’s policy has always been to win the hearts and minds of the local populace, and this move serves to improve regional communal peace,” he said.

“Rather than submitting to pressure from bigots, the defence ministry and the army should have defended the tweet.” He went on to say, “They should have taken on the trolls,” he added.

In a tweet, Maj. Gen. Yash Mor (retd) defended the deleted post, saying, “Indian Army has been at the forefront of interfaith harmony.” We take delight in the fact that we as officers have No religion; we just adopt the religion of the troops we lead!”

Citizens were photographed breaking their Ramazan fast with uniformed servicemen at an army site. In one, an army officer was seen shaking hands with an elderly man, while in another, a uniformed person was observed offering namaz to civilians.

“@prodefencejammu shared photographs of an Iftar organised by the Army,” tweeted social media user Vivek Prasad. An ‘illness’ had spread to the Army, according to Charlie. The tweet was deleted by @prodefencejammu. Lesson: If the Army’s family jewels are being squeezed by bigoted scum of the Earth, it will fail to win hearts and minds.”

A group of army veterans filed a petition with the Supreme Court on Friday, asking for a court-monitored investigation by a special investigation team into alleged demands for genocide against Muslims.

The petitioners said that if left unchecked, such hate mongering could harm the Indian Army’s morale and war readiness because the force is made up of personnel from several ethnic groups.

On the same day, the Supreme Court slapped Delhi cops for asserting on affidavit that no calls for genocide against Muslims were made during the Hindu Yuva Vahini event last December, which Chavhanke spoke at.

Kashmir: Bodies of labourers killed as ‘terrorists’ were exhumed